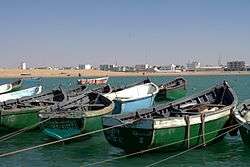 According to the Moroccan authorities, El Marsa belongs to Laayoune Province in the region of Laâyoune-Sakia El Hamra. Its population in 2004 is 10,229, the second-largest in the province (behind the regional capital El Aaiún) and third in the region. [2] It has a seaport on the Atlantic Ocean and therefore is also known as Laayoune Plage (El Aaiún Port). The town also has a hospital.

El Marsa is to the west of El Aaiún, on the N1, Morocco's main highway, which also goes into the Western Sahara, where it is the last settlement south until Boujdour.