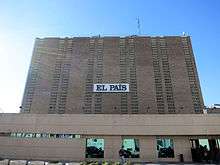 listen ; literally The Country) is the highest-circulation daily newspaper in Spain and one of three Madrid dailies considered to be national newspapers of record for Spain (along with El Mundo and ABC).[2] El País, based in Madrid, is owned by the Spanish media conglomerate PRISA.

Its headquarters and central editorial staff are located in Madrid, although there are regional offices in the principal Spanish cities (Barcelona, Seville, Valencia, Bilbao, Santiago de Compostela) where regional editions are produced. El País also produces a world edition in Madrid that is available online in Brazil (in Brazilian Portuguese) and Latin America (in European Spanish).[3]

El País was founded in May 1976[4][5] by a team at PRISA which included Jesus de Polanco, José Ortega Spottorno and Carlos Mendo.[6] The paper was designed by Reinhard Gade and Julio Alonso. It was first published on 4 May 1976,[7] six months after the death of dictator Francisco Franco, and at the beginning of the Spanish transition to democracy. The first editor-in-chief of the daily was Juan Luis Cebrian.[8]

El País was the first pro-democracy newspaper within a context where all the other Spanish newspapers were influenced by Franco's ideology.[9] The circulation of the paper was 116,600 copies in its first year.[10] It rose to 137,562 copies in 1977.[10]

El País filled a gap in the market and became the newspaper of Spanish democracy, for which role El País was awarded the Prince of Asturias Award for Communication and the Humanities in 1983, at a time when the transition from Franco's dictatorship to democracy was still developing. The paper's first Director (until 1988) was Juan Luis Cebrián, who came from the daily newspaper Informaciones. Like many other Spanish journalists of the time he had worked for Diario Pueblo (meaning People's Daily in English) which was a mouthpiece for the Francoist sindicato vertical.

Its reputation as a bastion of Spanish democracy was established during the attempted coup d'etat by Lieutenant Colonel Antonio Tejero of the Guardia Civil on 23 February 1981. During the uncertain situation of the night of 23 February 1981, with all the members of parliament held hostage in the Congress building and with tanks on the streets of Valencia, and before the state television station could transmit a speech by King Juan Carlos I condemning the coup, El País published a special edition of the newspaper called 'El País, for the Constitution'. It was the first daily paper on the streets that night with a clear pro-democracy position calling on citizens to demonstrate in favour of democracy. It was widely discussed in the news media that the then director of El País, Juan Luis Cebrián, telephoned the then director of Diario 16, Pedro J. Ramírez, in order to propose that both newspapers work on a joint publication in defence of democracy and Ramírez refused, claiming that he would prefer to wait a few hours to see how the situation developed. Diario 16 was not published until after a television broadcast by the king. Along with its commitment to democracy before the attempted coup of 23 February 1981, the Spanish Socialist Workers' Party's election victory in 1982 with an absolute majority and its open support for the government of Felipe González,[11] meant that El País consolidated its position during the 1980s as the Spanish newspaper with the most sales ahead of the conservative leaning ABC.

In 1986 El País was the recipient of the Four Freedom Award for the Freedom of Speech by the Roosevelt Institute.[12]

In 1987 El País received the largest amount of the state aid.[13] Both the rigorous journalistic standards and the fact that it was the first Spanish newspaper to establish internal quality control standards have increased the standing of El País. It was also the first Spanish daily to create the role of Reader's Advocate (equivalent to the Press Ombudsman in Britain) and in publishing a "Style Guide" that has become a benchmark for quality amongst journalists.[14] El País has also established a number of collaborative agreements with other European newspapers with a social democrat viewpoint. In 1989, El País participated in the creation of a common network of information resources with La Repubblica in Italy and Le Monde in France.

At the beginning of the 1990s, El País had to face a new political and journalistic challenge. The increasing political tensions caused by corruption scandals involving the socialist government of Felipe González polarized both the Spanish political classes and the press of the left and right wings. Since that time both the Partido Popular and the media aligned with it have accused El País and the other companies owned by PRISA.[15][16] along with Sogecable[17][18] of supporting the interests of the Spanish Socialist Workers' Party (PSOE). Despite this, El País has managed to maintain its position as the best selling generalist daily in Spain, although its lead over El Mundo has been reduced. Both in 1993 and 1994 it was the best selling newspaper in the country with a circulation of 401,258 copies and 408,267 copies, respectively.[19] In the period of 1995–1996 El Pais had a circulation of 420,934 copies, making it again the best-selling paper in the country.[20]

Since October 2001, an English language supplement of El País has been included in the Spanish version of the International Herald Tribune. This content can also be found on El País' internet site http://elpais.com/elpais/inenglish.html.

On 26 September 2007, the paper published the Bush-Aznar memo, a leaked transcript of a closed-door meeting between U.S. president George W. Bush and Spanish Prime Minister José María Aznar, shortly before the invasion of Iraq.[27] In 2007 the circulation of El País was about 400,000 copies.[28]

During the premiership of the PSOE's José Luis Rodríguez Zapatero El País published several articles criticising or opposing the policies of the Zapatero government. This provided opportunities for new entrants to represent the centre left, such as the appearance of the daily newspaper Público.

In March 2015, El País, together with other international newspapers, founded an alliance called LENA.

In June 2016, El País Brasil was found in a list of political newspapers that received money from the Workers Party government.[30]

El País has had five editors-in-chief since it was founded in 1976. In February 2014 it was announced that Antonio Caño would be proposed as new editor-in-chief, appointment that was ratified by the Board of Directors and became effective on 3 May 2014.

The appearance of El País is characterized by its sobriety, in both its treatment of information and its esthetics. Most pages contain five columns arranged in a neat and clear manner with distinct journalistic sub-categories. Photographs and graphics play a secondary, supporting role to the written word. The newspaper has had the same design from its foundation until the end of 2007, with hardly any changes (it used only black-and-white photographs, although the current format includes colour and more imaginative design, mainly in the varied supplements), and the same Times Roman font.[31]

The newspaper's format was revamped on 21 October 2007 with changes to its printed form, its digital presence on the Internet and the replacement of its historical motto 'Independent morning daily' with 'Global Spanish language newspaper'.[32] The paper began to be published in tabloid format.[33] Other notable changes are the inclusion of the acute accent in its title header and the substitution of Times Roman by Majerit.

Opinion polls cited in El País are all carried out by a separate company called Instituto OPINA.

In the mid-1990s, El País was the second Spanish newspaper to publish an internet edition, El País digital (the first was the Catalan newspaper Avui). On 18 November 2002, it became the first Spanish newspaper to introduce a payment system for access to the contents of its electronic version, which drastically reduced the number of visits to the website, to the extent that El Mundo, which maintained open access to the majority of its contents, became the leading Spanish digital newspaper. After taking this decision El País digital was suspended in 2002 by the Oficina de Justificación de la Difusión for four months because of two serious breaches of OJD regulations.[34] The El País digital website opened again on 3 June 2005 with free access to the majority of the contents. Subscription was required to gain access to multimedia contents and to the newspaper's archive.

In October 2014, El Pais launched a digital edition in Catalan.[36]

A number of publications issued in installments have also been produced throughout its history:

The paper's ideology has always been defined by a leaning towards Europeanism. Politically, it was situated in the centre-left[10] during most of the transition. After a series of disputes with the socialist administration of Jose Luis Zapatero (2004–2011), the paper is considered to be more predictably in sync with positions of support for the centre-right.[38] Today the newspaper's position with regard to the challenges of Catalan independence movement is strongly loyalist, defending the territorial integrity of Spain. It regularly criticized the Conservative government of Mariano Rajoy (2012–2015) over corruption scandals, economic performance and a "do-nothing" approach to the Catalan crisis.[39]

In the late 1970s and 1980s El País had close connections with the Partido Socialista Obrero Español (PSOE).[11] The paper has repeatedly supported King Juan Carlos I for his contribution to the consolidation of democracy, especially, for his decisive intervention in aborting the coup of 23 February 1981.[40] The paper is characterized by the amount of space it gives to the reporting of international news, culture and information regarding the economy, as well as Spanish news. It has specific columnists and contributors from different social backgrounds contributing to the democratic and pro-European editorial line of the newspaper.

The paper has criticized figures such as Che Guevara and his idea of armed struggle.[41]

More recently, it has also shown its clear opposition to the popular leftist movement in Spain called "Podemos".

El País has also been critical of the so-called "populist left" in Latin America. In April 2002, it termed the failed coup in Venezuela as a "coup against a tyrant", accusing Hugo Chávez of authoritarianism and of eliminating the separation of powers.[42] The paper criticized Chávez again regarding the Venezuelan constitutional referendum of 2007, accusing him of holding the referendum without the least "minimal guarantees", of restricting the actions of the National Electoral Council, and of tampering with the electoral roll.[43] The Venezuelan government, through the Ministry of Popular Power for Communication and Information, considers El País to be one of the Spanish newspapers most critical of the left-wing governments of Cuba, Venezuela, Ecuador, Nicaragua and Bolivia.[44]

The 16 February 2012 edition of El País was banned in Morocco due to the publication of a cartoon which, according to the Moroccan authorities, tarnished King Mohammed VI's name.[45]

On 24 January 2013, El País published a false report about the health status of then Venezuelan President Hugo Chávez, with false photography of an unknown man from a 2008 video.[46][47] The Venezuelan government announced legal action against El País,[48] and criticized both the violation of journalistic ethics as well as the violation of the patients' rights of President Chávez and others.