Elaeocarpus is a genus of tropical and subtropical evergreen trees and shrubs. The approximately 350 species are distributed from Madagascar in the west through India, Southeast Asia, Malaysia, southern China, and Japan, through Australia to New Zealand, Fiji, and Hawaii in the east. The islands of Borneo and New Guinea have the greatest concentration of species. These trees are well-known for their attractive, pearl-like fruit which are often colorful. A notable feature of the family is the drooping, often frilly, small clusters of flowers.

Many species are threatened, in particular by habitat loss. 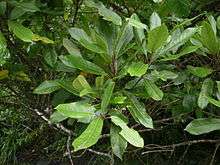 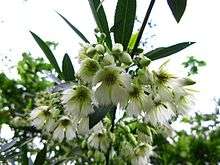