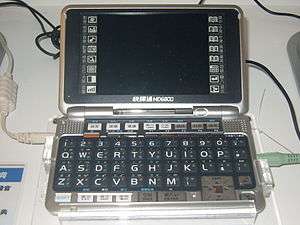 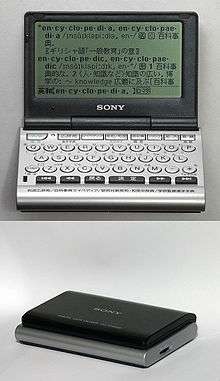 Most of the early electronic dictionaries were, in effect, print dictionaries made available in digital form: the content was identical, but the electronic editions provided users with more powerful search functions. But soon the opportunities offered by digital media began to be exploited. Two obvious advantages are that limitations of space (and the need to optimize its use) become less pressing, so additional content can be provided; and the possibility arises of including multimedia content, such as audio pronunciations and video clips.[2][3]

Publishers and developers of electronic dictionaries may offer native content from their own lexicographers, licensed data from print publications, or both, as in the case of Babylon offering premium content from Merriam Webster, and Ultralingua offering additional premium content from Collins, Masson, and Simon & Schuster, and Paragon Software offering original content from Duden, Britannica, Harrap, Merriam-Webster and Oxford.

Dictionary software generally far exceeds the scope of the hand held dictionaries. Many publishers of traditional printed dictionaries such as Langenscheidt, Collins-Reverso, OED – Oxford English Dictionary, Duden, American Heritage, and Hachette, offer their resources for use on desktop and laptop computers. These programs can either be downloaded or purchased on CD-ROM and installed. Other dictionary software is available from specialised electronic dictionary publishers such as iFinger, Abbyy Lingvo, Collins-Ultralingua, Mobile Systems and Paragon Software. Some electronic dictionaries provide an online discussion forum moderated by the software developers and lexicographers[4] 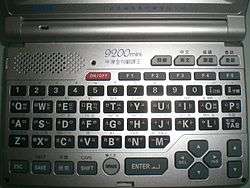 An electronic dictionary (only showing its Qwerty keyboard), model 9200 mini from Besta (好易通) in Hong Kong.

The well-known brands, such as Instant-Dict (快譯通), Besta (好易通), and Golden Global View (文曲星), includes basic functions like dictionaries, TTS, calculator, calendar etc. They also have functions other than just dictionary, for example, MP3 player, Video player, web browser (WiFi), and simple games. Some also support Adobe Flash (SWF files). Most of them usually will have a touch screen, Qwerty keyboard, a speaker, SD card slot, and sometimes microphone and camera also, for example, MD8500 from Instant-Dict. Their functions can even be comparable to smartphones, with the exception of phone capabilities since they do not have radios to make or receive make phone calls.

Handheld electronic dictionaries, also known as "pocket electronic dictionaries" or PEDs, resemble miniature clamshell laptop computers, complete with full keyboards and LCD screens. Because they are intended to be fully portable, the dictionaries are battery-powered and made with durable casing material. Although produced all over the world, handheld dictionaries are especially popular in Japan, Korea, China, and neighbouring countries, where they are the dictionary of choice for many users learning English as a second language.[5] Some of the features of hand held dictionaries include stroke order animations, voice output, handwriting recognition for Kanji and Kana, language-learning programs, a calculator, PDA-like organizer functions, encyclopedias, time zone and currency converters, and crossword puzzle solvers. Dictionaries that contain data for several languages may have a "jump" or "skip-search" feature that allows users to move between the dictionaries when looking up words, and a reverse translation action that allows further look-ups of words displayed in the results. Many manufacturers produce hand held dictionaries that use licensed dictionary content[6] that use a database such as the Merriam Webster Dictionary and Thesaurus while others may use a proprietary database from their own lexicographers.[7] Many devices can be expanded for several languages with the purchase of additional memory cards. Manufacturers include AlfaLink, Atree, Besta, Casio, Canon, Instant Dict, Ectaco, Franklin, Iriver, Lingo, Maliang Cyber Technology, Compagnia Lingua Ltd., Nurian, Seiko, and Sharp.

At 2016, Seiko announced that their mobile device apps on iPad iOS has been launched.[14]

Dictionaries of all types are available as apps for smartphones and for tablet computers such as Apple's iPad, the BlackBerry PlayBook and the Motorola Xoom. The needs of translators and language learners are especially well catered for, with apps for bilingual dictionaries for numerous language pairs, and for most of the well-known monolingual learner's dictionaries such as the Longman Dictionary of Contemporary English and the Macmillan English Dictionary.

There are several types of online dictionary,[15] including:

Some online dictionaries are regularly updated, keeping abreast of language change. Many have additional content, such as blogs and features on new words. Some are collaborative projects, most notably Wiktionary and the Collins Online Dictionary. And some, like the Urban Dictionary, consist of entries (sometimes self-contradictory) supplied by users. Many dictionaries for special purposes, especially for professional and trade terminology, and regional dialects and language variations, are published on the websites of organizations and individual authors. Although they may often be presented in list form without a search function, because of the way in which the information is stored and transmitted, they are nevertheless electronic dictionaries.

There are differences in quality of hardware (hand held devices), software (presentation and performance), and dictionary content. Some hand helds are more robustly constructed than others, and the keyboards or touch screen input systems should be physically compared before purchase. The information on the GUI of computer based dictionary software ranges from complex and cluttered, to clear and easy-to-use with user definable preferences including font size and colour.

A major consideration is the quality of the lexical database. Dictionaries intended for collegiate and professional use generally include most or all of the lexical information to be expected in a quality printed dictionary. The content of electronic dictionaries developed in association with leading publishers of printed dictionaries is more reliable that those aimed at the traveler or casual user, while bilingual dictionaries that have not been authored by teams of native speaker lexicographers for each language, will not be suitable for academic work. Some developers opt to have their products evaluated by an independent academic body such as the CALICO.

Another major consideration is that the devices themselves and the dictionaries in them are generally designed for a particular market. As an example, almost all handheld Japanese-English electronic dictionaries are designed for people with native fluency in Japanese who are learning and using English; thus, Japanese words do not generally include furigana pronunciation glosses, since it is assumed that the reader is literate in Japanese (headwords of entries do have pronunciation, however). Further, the primary manner to look up words is by pronunciation, which makes looking up a word with unknown pronunciation difficult (for example, one would need to know that 網羅 "comprehensive" is pronounced もうら, moura to look it up directly). However, higher end Japanese dictionaries include character recognition, so users (native speakers of Japanese or not) can look up words by writing the kanji.

Similar limitations exist in most two or multi-language dictionaries and can be especially crippling when the languages are not written in the same script or alphabet; it's important to find a dictionary optimized for the user's native language.

Several developers of the systems that drive electronic dictionary software offer API and SDK – Software Development Kit tools for adding various language-based (dictionary, translation, definitions, synonyms, and spell checking and grammar correction) functions to programs, and web services such as the AJAX API used by Google. These applications manipulate language in various ways, providing dictionary/translation features, and sophisticated solutions for semantic search. They are often available as a C++ API, an XML-RPC server, a .NET API, or as a Python API for many operating systems (Mac, Windows, Linux, etc.) and development environments, and can also be used for indexing other kinds of data.[18][19]