The company was founded in 1881, when Kintarō Hattori opened a watch and jewelry shop called "K. Hattori" (服部時計店, Hattori Tokeiten) in the Ginza area of Tokyo, Japan. Eleven years later, in 1892, he began to produce clocks under the name Seikosha (精工舎, Seikōsha), meaning roughly "House of Exquisite Workmanship". According to Seiko's official company history, titled "A Journey In Time: The Remarkable Story of Seiko" (2003), Seiko is a Japanese word meaning "exquisite" or "success" ("exquisite" is usually written 精巧 from Chinese jīngqiǎo, while the meaning "success" is usually written 成功 from Chinese chénggōng).

The first watches produced under the Seiko brand appeared in 1924. In 1969, Seiko introduced the Astron, the world's first production quartz watch; when it was introduced, it cost the same as a medium-sized car. Seiko later went on to introduce the first quartz chronograph. In the late 1980s, Seiko produced the first Kinetic watch that combined the self-energizing attributes of an automatic watch with quartz accuracy. The watch is entirely powered by its movement in everyday wear.

In 1985, Orient and Seiko established a joint factory.

Seiko is perhaps best known for its wristwatches, all of which were at one time produced entirely in-house. This includes not only major items such as microgears, motors, hands, crystal oscillators, batteries, sensors, LCDs but also minor items such as the oils used in lubricating the watches and the luminous compounds used on the hands and the dials. Seiko watches were originally produced by two different subsidiaries. On was Diani Seikosha Co.,(now known as Seiko Instruments Inc.), and the other was Suwa Seikosha Co.(now known as Seiko Epson Corporation). Having two company both producing same brand of watch enable Seiko to improve technology through competition and hedge risk. It also reduced risk of production problems, since one company can increase production in the case of decreased production in the other party.

Seiko produces watches with quartz, kinetic, solar, and mechanical watches of varying prices, ranging from around ¥4,000 (US$45) (sold under the brand Alba) to ¥50,000,000 (US$554,000).[2] To separate the customer groups, Seiko has created many different brands in Japan and the international market.

Seiko has several lines such as the Seiko "5" series (the 5 reflects five key features of the watch, namely automatic winding, day and date display in a single window—rare at the time, water resistant, recessed crown at the 4 o’clock position and durable case and bracelet—i.e. steel),[3] and the luxury "Credor," "King Seiko," and "Grand Seiko" series.

Prior to 1960, to challenge the status of Swiss watches and change the perception of Japanese watches, Daini Seikosha and Suwa began the discussion of a product line that can match the quality of Swiss watch under the suggestion of the parent company. At the time, Suwa Seikosha Co. was in charge of manufacturing men's watch, so it was decided that Suwa would be producing the first Grand Seiko (GS). 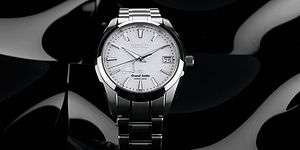 The design language of the Grand Seiko was set in 1967, with the creation of Grand Seiko 44GS. The 44GS set the ground for all future Grand Seiko with nine elements. These elements help improve the legibility of the watch under different situations, and create a sharp, crisp visual impression:

In 1968, Seiko introduced three 10 beat (10 ticks per second) calibers, the automatic caliber 61GS, the manual winding 45GS and 19GS for women's watch. The 61GS was Japan's first automatic 10 beat watch, and it was the most accurate mechanical watch due to the high beat calibers.[5] The calibers are considered high beat because normal mechanical movements beat six to eight times per second, and higher beat makes the watch more resistant to shock, thus achieving the high accuracy.[6]

In 2009, Seiko released the new 10 beat caliber 9S85, which is a completely new designed of the previous high beat caliber. The new caliber also met the Grand Seiko Standard, a chronometer certification that is more strict than the Chronometer Certificate in Switzerland.[7]

On December 25, 1969, Seiko released the world’s first quartz watch, the Seiko Quartz ASTRON. The watch uses a crystal oscillator at its core for accuracy, where the crystal generate steady vibration when voltage is applied to it. During the ten years of development period at Suwa Seikosha, Seiko manage to create many parts which enabled viable application of quartz on wristwatch. For example, Seiko cut the crystal oscillator into the shape of a tuning-fork, developed integrated circuit and step motor to properly operate the signals from the crystal oscillator. 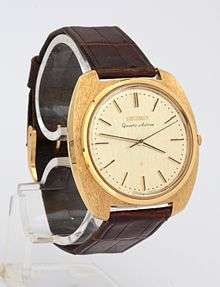 Additional to creating the parts that enabled quartz watch, Seiko did not monopolized the patent rights for the unique pieces, but decided to open it.

In 1975, Seiko launched the world’s first multi-function digital watch, the 0634.

In 1978, Seiko released the Twin Quartz watch to address the impact of temperature on the frequency of the quartz crystal oscillator, which put a limitation on the accuracy of quartz watch. Seiko put a second crystal in the watch that's linked with a processor that detects the change in temperature and signals the main oscillator to compensate. The result was a huge improve in the watch’s accuracy from 5 seconds per month to 5 seconds per year.

In 1988, Seiko combined the automatic with electric watch making with Seiko Kinetic, a movement that's powered by the user and convert the energy to electricity for the quartz movement.

In 2005, Seiko Spring Drive was announced. It was developed by Yoshikazu Akahane and his team and inspired by Yoshikazu’s vision: “a watch wound by a mainspring and with one-second-a-day accuracy, a precision that only the finest electronic watches could deliver.”[8] This movement achieved high accuracy with 1 second per day, long power reserve (72 hours) with its special developed alloy, fast winding with the “Magic Lever” design and glide-motion movement with the watch hands.

The movement uses a mainspring as a source of energy and transmits it through gear train just like a traditional mechanical watch, but instead of an escapement and balance wheel, Seiko used the newly developed "Tri-synchro regulator", which acts like a quartz movement. The Tri-synchro regulator has three main function: controlling the mechanical energy of the mainspring, generate electricity for the low consumption (~25 nanowatts) quartz crystal oscillator and generate a magnetic force to regulate the glide wheel. By replacing the traditional escapement with magnetic brake, the Spring Drive operates with lower noise and present a glide motion hand that shows continuous flow of time. The Spring Drive movement was also used as the basis for the first ever watch designed to be worn by an astronaut during a space walk, the aptly named Seiko Spring Drive Spacewalk.[9]

Seiko in The United States of America 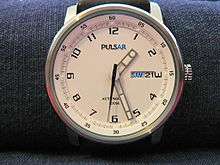 Seiko's 2004 marketing campaign emphasized that a watch, as opposed to other traits (such as what car they drive, for example), tells the most about a person.

Various Seiko watches were worn by James Bond in four films starring Roger Moore from 1977 to 1985. Moore wore a Seiko in the 1979 film North Sea Hijack. Also, a Seiko watch was worn by Sean Connery in the 1983 Bond film Never Say Never Again.

A Seiko 6105-8110/8119 dive watch was worn by Martin Sheen in the 1979 film Apocalypse Now.[10] A Seiko H558 is worn by Arnold Schwarzenegger in various films including Commando and Predator. A Seiko Chronograph is worn by Jason Bourne in the book The Bourne Identity by Robert Ludlum. Aki Ross wears a Seiko wristband computer in the animated film Final Fantasy: The Spirits Within, and in Metal Gear Solid V: Ground Zeroes as well as Metal Gear Solid V: The Phantom Pain, Big Boss can be seen wearing the Seiko G757 5020. A Seiko 7A28-7000, basically a modified Seiko Chronograph is worn by Ripley (Sigourney Weaver) in the 1986 film Aliens – various other characters can also be seen wearing various Seiko watches devised by Italian car designer Giorgetto Giugiaro.

In the 2013 oceanic survival film All Is Lost, Robert Redford's character can be seen wearing the Seiko SKX009/SKX175 dive watch, a variation of the SKX007.[11]

NASA Flight Director Gene Kranz wore a Seiko 5 model 6119-8460 during the height of his career. It was on his wrist when the Apollo 11 crew touched down on the lunar surface, when the Apollo 13 explosion occurred, and throughout the remainder of his career at NASA. The watch was recently sold and is still in working order.

On Friday, January 10, on the eve of the Australian Tennis Open in Melbourne, Seiko launched its new partnership with world no.1 professional tennis player Novak Djokovic, with Shinji Hattori, President of Seiko Watch Corporation, announcing the agreement and presenting to Novak Djokovic a Seiko Astron GPS Solar watch as a symbol of this new global partnership.

Seiko is also the official timekeeper of many major sporting events:

Seiko is also named as the official timekeeper of the Gran Turismo racing game series, published by Sony Computer Entertainment. It's also the sponsor of FC Barcelona.

Seiko used to sponsor Honda F1 (previously known as BAR [British American Racing] Honda). The Seiko name cannot currently be found on the Honda racing cars because Seiko Japan refused to be advertised whilst the names of tobacco companies are still appearing on the cars. They can, however, be found on the lollipop used in the pitlane.

Seiko Holdings is one of the three core companies of the Seiko Group. The Seiko Group consists of Seiko Holdings Corporation (Seiko), Seiko Instruments Inc. (SII), and Seiko Epson Corporation (Epson). Although they have some common shareholders, including the key members of the Hattori family (posterity of Kintarō Hattori), the three companies in the Seiko Group are not affiliated. They are managed and operated completely independently. Seiko Watch, an operating subsidiary of Seiko Holdings, markets Seiko watches, while SII and Epson manufacture their movements.

Seiko also produces other electronic devices. Notably, during the 1980s, the company produced a range of digital synthesizers, such as the DS-250, for use in electronic music. Today, the music division, a part of Seiko Life Sports, produces metronomes and tuning devices.