An enharmonic keyboard is a musical keyboard, where enharmonically equivalent notes do not have identical pitches. A conventional keyboard has, for instance, only one key and pitch for C sharp and D flat, but an enharmonic keyboard would have two different keys and pitches for these notes. Traditionally, such keyboards use black split keys to express both notes,[1][2] but diatonic white keys may also be split.[3]

As important device to compose, play and study enharmonic music,[4] enharmonic keyboard may produce microtones and have separate keys for at least some pairs of not equal pitches that must be enharmonically equal in conventional keyboard instruments.[5]

The term (divergence of scholar opinions)

'Enharmonic keyboard' is a term used by scholars in their studies of enharmonic keyboard instruments (organ, harpsichord, piano,[6] harmonium and synthesizer) with reference to a keyboard with more than 12 keys per octave. Scholarly consensus about the term's precise definition currently has not been established.

In the New Grove Dictionary (2001) Nicolas Meeùs defines an "enharmonic keyboard" as "a keyboard with more than 12 keys and sounding more than 12 different pitches in the octave".[7] He however does not specify the origin of the term in his article. Rudolph Rasch (2002) suggested to apply the term "enharmonic keyboard" more closely to keyboards with 29-31 keys per octave.[8]

Patrizio Barbieri (2007), in his turn, raised objection that this usage is not supported by early theoretical works.[9] As for historical evidence, confusion has often reigned over the terminology of split-keyed instruments, which were called sometimes 'chromatic', sometimes 'enharmonic'. The builders (or persons who only projected the construction) of such keyboard instruments often gave them names without any reference to genus, like 'archicembalo' (Nicola Vicentino), 'cembalo pentarmonico' (Giovanni Battista Doni), 'Clavicymbalum universale' (Michael Praetorius) or even simply 'Clauocembalo' (that is clavicembalo; Gioseffo Zarlino[10][11]).

Vicentino's enharmonic keyboard (Italy, 1555) with version of tuning in cents 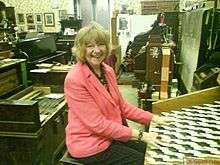 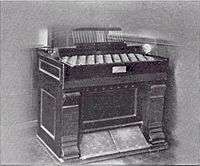 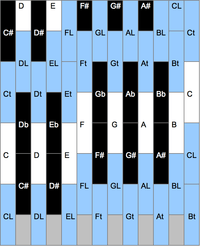 Schematic representation of Dr. Adriaan Fokker's microtonal keyboard for a 31EDO pipe organ (Fokker organ) with two manuals and pedal, built by him. 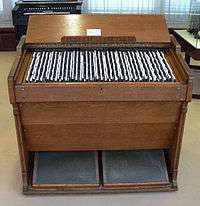 Many instruments with enharmonic keyboards were built during the Renaissance and Baroque eras. Most composers and performers who used these instruments are virtually unknown today. Among them are Johann Kaspar Kerll's teacher, Giovanni Valentini, who played a harpsichord with 77 keys for 4 octaves (19 keys per octave plus one extra C), and Friedrich Suppig,[15] published one of the definitive works for an instrument with an enharmonic keyboard: the Fantasia of the Labyrinthus Musicus, which is a multi-sectional composition that makes use of all 24 keys and is intended for a keyboard with 31 notes per octave and pure major thirds.

The notes of each progressively-higher cardinality are appended to the outer edges of the lower-cardinality scale, such that each well-formed scale's note-controlling buttons are embedded, unchanged, within the set of those controlling the higher-cardinality scales. Hence, the skills gained in learning to play chromatic music on a chromatic Wicki keyboard can be applied, without modification, to performance on an enharmonic Wicki keyboard.

Isomorphic keyboards were not discovered until the latter half of the 19th century.