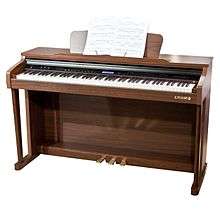 The following is a list of features that typify the digital piano:

Minuet in F Major, BWV Anh. 113, by Johann Sebastian Bach from the Notebook for Anna Magdalena Bach, played with a digital piano

Minuet in D minor, BWV Anh. 132, by Johann Sebastian Bach from the Notebook for Anna Magdalena Bach, played with a digital piano

Minuet in G major (BWV Anh. 114) from the Notebook for Anna Magdalena Bach, played with a digital piano

Minuet in G minor (BWV Anh. 115) from the Notebook for Anna Magdalena Bach, played with a digital piano

In most implementations, a digital piano produces a variety of piano timbres and usually other sounds as well. For example, a digital piano may have settings for a concert grand piano, an upright piano, a tack piano, and various electric pianos such as the Fender Rhodes, the Wurlitzer, and the DX electric piano. Some digital pianos incorporate other basic "synthesizer" sounds such as string ensemble, for example, and offer settings to combine them with piano.

In general, the sounds produced by a digital piano are based on sampling, by which real piano sound samples are stored in ROM. The samples stored in digital pianos are usually of very precision recording and made using high-quality pianos, expensive microphones, and high-quality preamps in a professional recording studio.[2] ROM may include multiple samples for the same keystroke, attempting to reproduce diversity observed on the real piano, but the number of these recorded alternatives is limited.

Sample-based digital pianos do have limitations on the faithfulness with which they reproduce the sound of an acoustic piano. These might include the lack of implementation of harmonic tones that result when certain combinations of notes are sounded, limited polyphony, and a lack of natural reverberation when the instrument is played percussively. They often lack the incidental acoustic noises associated with piano playing, such as the sounds of pedals being depressed and the associated machinery shifting within the piano, which some actually consider a benefit. These limitations apply to most acoustic instruments and their sampled counterparts, the difference often being described as "visceral". On an acoustic piano, the sustain pedal lifts the dampers for all strings, allowing them to resonate naturally with the notes played. Digital pianos all have a similar pedal switch to hold notes in suspension, but only high-end models can reproduce the sympathetic resonance effect.

Earlier digital pianos, such as those produced in the 1990s, often had its polyphony limited to only 32 or 64 notes, and its sampling system were comparable to standard home keyboards.

Some digital piano implementations, like Roland's V-Piano[2] and the software-based Pianoteq, use mathematical models based on real pianos to generate sound, which brings the ability to generate sounds that vary more freely depending on how the keys have been struck, in addition to allow a more realistic implementation of the distinctive resonances and acoustical noises of real pianos.

However, with the technological advances, recent digital pianos are mostly capable of recreating string resonances, reverberations and other acoustical effects via digital signal processing (DSP) and modeling technology. One example is the Casio Privia, which is able to generate such acoustical effects by means of a simple DSP, which is far less complex than physical modeling.

Most digital pianos implement a variety of features not found on a traditional piano.

Digital pianos usually offer a MIDI connection, allowing them to control or be controlled by other electronic instruments and sequencers. They may also have an external storage slot to save and load MIDI data, which the piano can play automatically, allowing it to function as a player piano.

Some have a built-in sequencer to aid in composition.

they may have illuminated keys so that a beginner can learn a piece by playing keys that are lit.

Some can transpose music as it is played, allowing the pianist to play in a familiar key while the piano renders it in another.

An acoustic piano produces reverberation in its soundboard and in the room where it is played. Digital pianos often have a feature to electronically simulate reverberation as well. Other digital pianos may have additional reverberation options such as a "stage simulation." Some also have chorus, tremolo, and phaser effects, all of which are generated by digital signal processing.

Digital pianos typically use analog sensors for its keyboard action, as opposed to digital sensors of a regular keyboard and synthesizer. These sensors notably works in a similar way to those used in analog joysticks found on video game controllers, in which they the velocity input is converted from the key movement as well, not just the initial pressure of the key sensor.

Since the inception of the MIDI interface standard in the early 1980s, most digital pianos can be connected to a computer. With appropriate software, the computer can handle sound generation, mixing of tracks, music notation, musical instruction, and other music composition tasks.[4]

The physical form of a digital piano can vary considerably, with a keyboard as the one constant feature.

Most console digital pianos vaguely resemble an electronic organ or a spinet harpsichord but usually lacking a fully enclosed lower section, while some models are based on the casework of traditional upright pianos with a fully enclosed bottom part and pedals that look like actual piano pedals. An opposite and recent trend is to produce an instrument which has a unique and distinctive appearance, unobtainable with a conventional instrument. Yamaha and Casio makes a model which is designed to stand against a wall and is far shallower from keyboard to back than any possible upright design, as well as shorter height.

Console digital pianos, due to its form, offers less portability than the other types, and is mainly designed for use in single place (e.g. home or studio), and not intended for mobility such as on stage or for live performance.

These are a sub-type of console digital pianos that offers a more contemporary design which closely resemble a traditional upright piano. Upright digital pianos are mainly intended for home use, and is usually more expensive than the other types. Some models, especially the higher-end ones, often feature an actual wooden keys as opposed to regular plastic keybed.

An uncommon form of digital piano that resemble a grand piano cabinet, usually with a more precision keyboard action and high-quality sound system built into the cabinet in a similar manner as the strings on an actual grand piano. These pianos are mostly premium novelty models offered by only small number of manufacturers, and often has higher prices than an average upright piano.

Another common form is the stage piano, designed for use with live performances, professional audio, or in recording studio. This type of digital piano normally makes no attempt to imitate the physical appearance of an acoustic piano, rather resembling a modern synthesizer or music workstation. A distinguishing feature of most stage pianos is a lack of internal loudspeakers and amplification - it is normally assumed that a powerful keyboard amplifier or PA system will be used. However, some stage pianos are unique that it is remain equipped with powered speakers.

Yet another form is the portable digital piano which is what appear to be combining the versatility of stage pianos, but with portability and features similar to a conventional digital keyboard. These digital pianos are mostly designed for various purposes such as home, studio, classroom, stage or personal use. It is similar in form to a stage piano, but much lighter in weight, and having a more compact size. Unlike stage pianos, portable digital pianos were commonly equipped with average-powered internal loudspeakers, usually has lower cost than other types, and its sound quality were often comparable or similar to that of a regular digital keyboards due to a simpler sound synthesis system, though some models, still utilize a similar sound engine as the more advanced model lineups of the same manufacturer.

Most portable digital pianos could be freely fitted in a regular keyboard stand like a stage piano, while some types also come equipped with a dedicated matching stand which, when assembled, will have a slight resemblance to a console digital piano.

Portable digital pianos, for the sake of lower production cost, were often equipped with a less complex system for the weighted keys. As a result, the feel of the keys is usually much less realistic than other digital pianos. However, it still retain the emulated weight mechanism (lower keys are heavier than higher ones), though not as precision as more expensive pianos. However, certain models include synthetic ivory-like keys as opposed to standard plastic keys.

Many examples of portable digital pianos are mostly those usually produced by Yamaha, Korg, and Casio under the $900 price range. Kawai has also recently competed within the low-cost digital piano class as of early 2015.

Pianoteq is a software synthesizer which share some characteristics to a piano module.

Just like a traditional piano, a digital piano features a keyboard. A digital piano's keyboard is weighted to simulate the action of a traditional piano and is velocity sensitive so that the volume of the sounds depends on how hard the keys are pressed. Many instruments now have a complex action incorporating actual hammers in order to better simulate the touch of a grand piano.[5]

In addition, commercially available pedal switch that is commonly used for regular keyboards can also be used, especially on portable models.

Unlike acoustic pianos, digital pianos normally maintenance-free and are less prone to be affected by unusual conditions. However, those that have a sophisticated features like an advanced mechanical action for the keys, still require special maintenance to keep the action in normal working condition, especially if used for an extended periods of time since digital piano action are prone to become loose or less rigid over time, reducing its sensitivity and response.

As an electronic instrument, digital pianos doesn't need to be tuned as their sound are produced electronically, yet the sound quality may be affected over time or under extreme conditions, such as the change of quality of the built-in speakers.

Manufacturers continue to develop technology for both sound and feel covering a wide range of quality and cost. Well-known manufacturers of digital pianos include Casio, Clavia, Kawai, Korg, Kurzweil, Roland, and Yamaha.