Gill was named Royal Designer for Industry, the highest British award for designers, by the Royal Society of Arts. He also became a founder-member of the newly established Faculty of Royal Designers for Industry.

A rubbing of a memorial bronze created by Eric and Max Gill in 1905.

Gill was born in 1882 in Hamilton Road, Brighton and grew up in the Brighton suburb of Preston Park. One of twelve children, he was the elder brother of MacDonald "Max" Gill (1884–1947), the well known graphic artist. In 1897 the family moved to Chichester. He studied at Chichester Technical and Art School, and in 1900 moved to London to train as an architect with the practice of W.D. Caroe, specialists in ecclesiastical architecture. Frustrated with his training, he took evening classes in stonemasonry at Westminster Technical Institute and in calligraphy at the Central School of Arts and Crafts, where Edward Johnston, creator of the London Underground typeface, became a strong influence. In 1903 he gave up his architectural training to become a calligrapher, letter-cutter, and monumental mason.[2][3][4]

Working from Ditchling in Sussex, where he lived with his wife, in 1910 Gill began direct carving of stone figures. These included Madonna and Child (1910), which English painter and art critic Roger Fry described in 1911 as a depiction of "pathetic animalism", and Ecstasy (1911). Such semi-abstract sculptures showed Gill's appreciation of medieval ecclesiastical statuary, Egyptian, Greek and Indian sculpture, as well as the Post-Impressionism of Cézanne, van Gogh and Gauguin.[5]

His first public success was Mother and Child (1912). A self-described "disciple" of the Ceylonese philosopher and art historian Ananda Coomaraswamy, Gill was fascinated during this period by Indian temple sculpture.[6] Along with his friend and collaborator Jacob Epstein, he planned the construction in the Sussex countryside of a colossal, hand-carved monument in imitation of the large-scale Jain structures at Gwalior Fort in Madhya Pradesh, to which he had been introduced by the Indiaphile William Rothenstein.[7]

In 1914 he produced sculptures for the stations of the cross in Westminster Cathedral. In the same year he met the typographer Stanley Morison. After the war, together with Hilary Pepler and Desmond Chute, Gill founded The Guild of St Joseph and St Dominic at Ditchling, where his pupils included David Jones, who soon began a relationship with Gill's daughter, Petra.

He designed several war memorials after the First World War, including the Grade II* listed Trumpington War Memorial. Commissioned to produce a war memorial for the University of Leeds, Gill produced a frieze depicting Jesus driving the money-changers from the temple, showing contemporary Leeds merchants as the money-changers. Gill contended that the "money men" were a key cause of the war. This is at the Michael Sadler Building at the University.

In 1924, Gill moved to Capel-y-ffin in Powys, Wales, where he established a new workshop, to be followed by Jones and other disciples. In 1928, he set up a printing press and lettering workshop in Speen. He took on a number of apprentices, including David Kindersley, who in turn became a successful sculptor and engraver, and his nephew, John Skelton, noted as an important letterer and sculptor. Other apprentices included Laurie Cribb, Donald Potter and Walter Ritchie.[8] Others in the household included Gill's two sons-in-law, Petra's husband Denis Tegetmeier and Joanna's husband Rene Hague.

In 1928–9, Gill carved three of eight relief sculptures on the theme of winds for Charles Holden's headquarters for the London Electric Railway (now Transport for London) at 55 Broadway, St James's. He carved a statue of the Virgin and Child for the west door of the chapel at Marlborough College.[9] 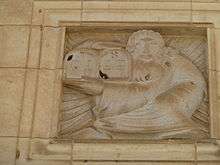 Relief representing Israelite culture, one of ten bas-reliefs by Gill in the inner courtyard at the Rockefeller Museum, Jerusalem (1934).

In 1932, Gill produced a group of sculptures, Prospero and Ariel,[10] and others for the BBC's Broadcasting House in London. In 1934, Gill visited Jerusalem where he worked at the Palestine Archaeological Museum (now the Rockefeller Museum).[11] He carved a stone bas-relief of the meeting of Asia and Africa above the front entrance together with ten stone reliefs illustrating different cultures and a gargoyle fountain in the inner courtyard. He also carved stone signage throughout the museum in English, Hebrew, and Arabic.

Gill was commissioned to produce a sequence of seven bas-relief panels for the façade of The People's Palace, now the Great Hall of Queen Mary University of London, opened in 1936. In 1937, he designed the background of the first George VI definitive stamp series for the post office,[12] and in 1938 produced The Creation of Adam, three bas-reliefs in stone for the Palace of Nations, the League of Nations building in Geneva, Switzerland. During this period he was made a Royal Designer for Industry, the highest British award for designers, by the Royal Society of Arts and became a founder-member of the Faculty of Royal Designers for Industry when it was established in 1938. 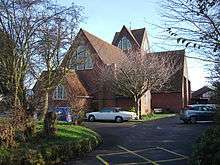 His only complete work of architecture was St Peter the Apostle Roman Catholic Church in Gorleston, built in 1938-39. 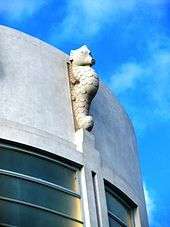 The Art Deco Midland Hotel was built in 1932–33 by the London Midland & Scottish Railway to the design of Oliver Hill and included works by Gill, Marion Dorn and Eric Ravilious.

For the project, Gill produced:

One of Gill's first independent lettering projects was creating an alphabet for W.H. Smith's sign painters. In 1925 he designed the Perpetua typeface, with the uppercase based upon monumental Roman inscriptions, for Morison, who was working for the Monotype Corporation. An in-situ example of Gill's design and personal cutting in the style of Perpetua can be found in the nave of Poling church in West Sussex, on a wall plaque commemorating the life of Sir Harry Johnston. He designed the Gill Sans typeface in 1927–30, based on the sans-serif lettering originally designed for the London Underground. (Gill had collaborated with Edward Johnston in the early design of the Underground typeface, but dropped out of the project before it was completed.) In the period 1930–31 Gill designed the typeface Joanna which he used to hand-set his book, An Essay on Typography.

These dates are somewhat debatable, since a lengthy period could pass between Gill creating a design and it being finalised by the Monotype drawing office team (who would work out many details such as spacing) and cut into metal.[23][24] In addition, some designs such as Joanna were released to fine printing use long before they became widely available from Monotype.

The family Gill Facia was created by Colin Banks as an emulation of Gill's stone carving designs, with separate styles for smaller and larger text.[25]

One of the most famous British typefaces, Gill Sans, was used in the classic design system of Penguin Books and by the London and North Eastern Railway and later British Railways, with many additional styles created by Monotype both during and after Gill's lifetime.[23] In the 1990s, the BBC adopted Gill Sans for its wordmark and many of its on-screen television graphics.

Gill was commissioned to develop a typeface with the number of allographs limited to what could be used on Monotype or Linotype machines. The typeface was loosely based on the Arabic Naskh style but was considered unacceptably far from the norms of Arabic script. It was rejected and never cut into type.[26][27][28] 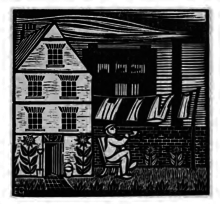 An Eric Gill woodcut showing Hammersmith, illustrating the book The Devil's devices, or, Control versus Service by Hilary Pepler.

Some of his writings include:

Gill also provided woodcuts and illustrations for a range of other books.

As a young man, Gill was a member of the Fabian Society, but later resigned.[37]

In the 1930s Gill became a supporter of social credit; later he moved towards a socialist position.[38] In 1934, Gill contributed art to an exhibition mounted by the left-wing Artists' International Association, and defended the exhibition against accusations in The Catholic Herald that its art was "anti-Christian".[39] Gill was adamantly opposed to fascism, and was one of the few Catholics in Britain to openly support the Spanish Republicans.[38] Gill became a pacifist and helped set up the Catholic peace organisation Pax with E. I. Watkin and Donald Attwater.[40] Later Gill joined the Peace Pledge Union and supported the British branch of the Fellowship of Reconciliation.[38]

In 1904, Gill married Ethel Hester Moore (1878–1961), with whom he had three daughters and an adopted son. In 1907, he moved with his family to "Sopers", a house in the village of Ditchling in Sussex, which would later become the centre of an artists' community inspired by Gill. Much of his work and memorabilia is held and on display at the Ditchling Museum of Art and Craft.

In 1913, Gill moved to Hopkin's Crank at Ditchling Common, two miles north of the village.[3] The Common was an arts and crafts community focused around a chapel, with an emphasis on manual labour in opposition to modern commerce. He became a Roman Catholic in 1913 and worked primarily for Catholic clients in the largely Anglican country, started a lay religious order with his wife and others called the Guild of St. Joseph and St. Dominic, and began wearing a girdle of chastity under a habit. His personal diaries describe his sexual activity in great detail, including extramarital affairs, incest with his two eldest teenage daughters, incestuous relationships with his sisters, and sexual acts on his dog.[41] This aspect of Gill's life was little known until publication of the 1989 biography by Fiona MacCarthy. The 1966 biography by Robert Speaight mentioned none of it. Gill's daughter Petra, who was alive at the time of the MacCarthy biography, described her father as having "endless curiosity about sex" and that "we just took it for granted".[42][43] Despite the acclaim and shock the book received, MacCarthy received some criticism for revealing Gill's incest in his daughter's lifetime.[44][45]

In 1924, Gill moved to Capel-y-ffin in Wales. Gill soon tired of Capel-y-ffin, coming to feel that it had the wrong atmosphere and was too far from London, where most of his clients were. In 1928 he moved to Pigotts at Speen near High Wycombe in Buckinghamshire.[3]

Gill died of lung cancer in Harefield Hospital in Middlesex in 1940. He was buried in Speen churchyard in the Chilterns, near Princes Risborough, the village where his last artistic community had practised.

Gill's papers and library are archived at the William Andrews Clark Memorial Library at UCLA in the USA, designated by the Gill family as the repository for his manuscripts and correspondence.[4] Some of the books in his collection have been digitised as part of the Internet Archive.[46] Additional archival and book collections related to Gill and his work reside at University of Waterloo Library[2] and the University of Notre Dame's Hesburgh Library.[47]

As the revelations about Gill's private life reverberated, there was a reassessment of his personal and artistic achievement. As biographer Fiona MacCarthy sums up:

After the initial shock, [...] as Gill's history of adulteries, incest, and experimental connection with his dog became public knowledge in the late 1980s, the consequent reassessment of his life and art left his artistic reputation strengthened. Gill emerged as one of the twentieth century's strangest and most original controversialists, a sometimes infuriating, always arresting spokesman for man's continuing need of God in an increasingly materialistic civilization, and for intellectual vigour in an age of encroaching triviality.[48]

A fictionalized version of Gill, and a satirical exploration of his legacy and influence in present-day Ditchling, were major elements of Rob Magnuson Smith's novel Scorper.