The king’s nickname ”Klipping” or ”Glipping” refers to a medieval coin that has become ”clipped” (a "clipped penny") or cut in order to indicate devaluation. A former popular explanation—that Eric blinked more than usual (Danish glippe)—is now generally rejected. The nickname is an unkind reference to his lack of trustworthiness. He "short-changed" his people and the monarchy. 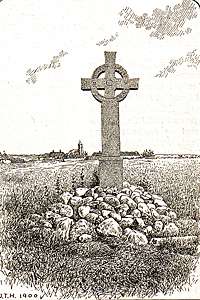 Memorial cross in village of Finderup

When his father Christopher was murdered, Prince Eric was too young to rule in his own right. The Danish court appointed his mother, Queen Margaret Sambiria (Danish: Sprænghest) as regent. She was the daughter of Count Sambor II of Pomerania and was a clever and intelligent woman. Immediately she had to fight to keep her son on the throne from two powerful enemies in Archbishop Jacob Erlandsen, who excommunicated the bishop who anointed young Eric as king, and Duke Valdemar of southern Jutland.

Taking advantage of the situation Chief Jarimar II of Rügen gathered an army of Wends and invaded Zealand. Queen Margaret raised an army but was soundly defeated in 1259 near Ringsted. Jarimar went on to attack and pillage Copenhagen later that year. He shipped his army to Skåne to continue his campaign. Unfortunately for him, he encountered the wrath of a farmer's wife, who killed him outright. The Wends fled back to Rűgen.

Believing the Wendish incursion showed the Queen was weak, Duke Valdemar rebelled. The queen was forced to raise another army and march to Jutland to put the duke in his place. She defeated the duke, and while he negotiated a truce with her, he gathered allies in northern Germany to help him attack. The combined forces defeated Queen Margaret at the Battle of Lo Heath. She and her son Eric were captured and she was forced to cede all royal properties in southern Jutland to secure her release.

Margaret released Archbishop Erlandsen from prison thinking he would be grateful, but he issued interdict over all of Denmark trying to force Queen Margaret and Eric off the throne. In 1263, acting as regent of Denmark, the queen wrote to Pope Urban IV asking him to intervene with Archbishop Erlandsen. After several years of quibbling, the pope agreed to several items the queen wanted. Urban IV issued a dispensation to alter the terms of the Danish succession that would permit women to inherit the Danish throne. This would make it possible for one of Eric's sisters to become the reigning Queen of Denmark in the event of Eric V's death because he had no children. Although Urban IV gave his consent, it never became an issue. Eric's son, Eric Menved eventually succeeded to the Danish throne.

As an adult ruler, Eric tried to enforce his power over the church and nobility. In the 1270s, Eric Glipping attacked Småland. His conflict with the church was brought to a satisfying result, with the help of the pope. By 1282 he had so offended the nobles throughout Denmark that he was forced to accept a charter (Danish: håndfæstning - a kind of a Danish Magna Carta) which limited his authority and guaranteed the ancient rights and customs which preserved the power of the nobles. 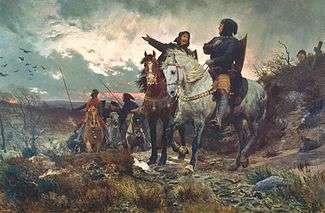 "The conspirators ride from Finderup after the murder of Eric Klipping St. Cecilia Night 1286". Painted by Otto Bache, 1882.

Legend has it that several nobles swore an oath that they would murder Eric in revenge for personal slights or policies the king enforced that they did not like. Chief among the conspirators was Marshal (Danish: marsk) Stig Andersen Hvide and Jacob Nielsen, Count of Halland. They paid Rane Jonsen, one of the king's companions, to keep them informed as to the king's activities, in order to fulfill their oath.

November 1286 found the king at Viborg, in central Jutland. After a long day's hunt in the countryside led by Rane Jonsen, the king and a few attendants couldn't find their way back to the king's farm at Viborg. Rane suggested that they take shelter for the night of 22 November 1286 in the church barn in the village of Finderup. The assassins, dressed as Franciscan monks, were kept informed as to the kings' whereabouts and waited for everyone to settle down for the night. Once the king fell asleep, they rushed from their hiding places and stabbed and hacked the king to death. Tradition has it that he received 56 stab wounds. The folktale that grew up around this event has Stig Andersen personally striking the first blows in revenge for King Eric's seduction of Stig's wife while Stig himself was off with the king's army. Eric's bloody corpse was discovered the next morning.[2]

The court immediately blamed the nation's most powerful noblemen Marsk Stig Andersen Hvide and Count Jacob of Halland and outlawed them. Whether they actually had anything to do with the murder remains a mystery. Stig fled the country to take up piracy. Certainly Stig Andersen was not the only person who had reason to want to see King Eric eliminated. Duke Valdemar of southern Jutland, and Jakob Erlandsen's appointments to bishoprics were bitter enemies until the king's death. Eric's death meant that the rights and guarantees the 1282 charter lost their effectiveness, since the next king would not be bound by the same agreement.[3]

With his wife, Agnes of Brandenburg, whom he married on 11 November 1273.