Christian III (12 August 1503 – 1 January 1559) reigned as king of Denmark from 1534 until his death and Norway from 1537 until his death. During his reign, Christian established Lutheranism as the state religion within his realms as part of the Protestant Reformation.[1] [2]

Christian was the eldest son of future king Frederick I and Anna of Brandenburg. He was born at Gottorf Castle which Frederick I had made a primary residence. In 1514, when he was just ten years old, Christian's mother died. Four years later, his father remarried to Sophie of Pomerania (1498–1568). In 1523, Frederick I was elected king of Denmark in the place of his nephew, Christian II. The young prince Christian's first public service after his father became king was gaining the submission of Copenhagen, which stood firm for the fugitive Christian II. As stadtholder of the Duchies of Holstein and Schleswig in 1526, and as viceroy of Norway in 1529, Christian III displayed considerable administrative ability.[3]

Christian's earliest teacher, Wolfgang von Utenhof, and his Lutheran tutor, the military general Johann Rantzau, were both zealous reformers who had an influence on the young prince. At their urging, while traveling in Germany in 1521, he made himself present at the Diet of Worms to hear Martin Luther speak. Luther's arguments intrigued him. The prince made no secret of his Lutheran views. His outspokenness brought him into conflict, not only with the Roman Catholic Rigsraad, but also with his cautious and temporizing father. At his own court at Schleswig he did his best to introduce the Protestant Reformation, despite the opposition of the bishops. He made the Lutheran Church the State Church of Schleswig-Holstein with the Church Ordinance of 1528.[4][5] 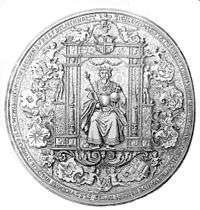 After his father's death, in 1533, Christian was proclaimed king at an assembly in Rye, a town in eastern Jutland, in 1534. The Danish State Council (rigsraad), dominated by Roman Catholic bishops and nobles, refused to accept Duke Christian as king and turned to Count Christopher of Oldenburg in order to restore Christian II to the Danish throne. Christian II had supported both the Roman Catholics and Protestant Reformers at various times. In opposition to King Christian III, Count Christopher was proclaimed regent at the Ringsted Assembly (landsting), and at the Skåne Assembly ( landsting) on St Liber's Hill at Lund Cathedral. This resulted in a two-year civil war, known as the Count's Feud (Grevens Fejde, 1534–36), between Protestant and Catholic forces.[6]

Count Christopher had the support of most of Zealand, Scania, the Hanseatic League, and the small farmers of northern Jutland and Funen. Christian III found his support among the nobles of Jutland. In 1534, peasants under Skipper Clement began an uprising in northern Jutland, pillaging the holdings of Lutheran nobles. An army of nobles and their vassals assembled at Svendstrup and suffered a terrible defeat at the hands of the peasants. Realizing his hold on the throne was in imminent danger, Christian III negotiated a deal with the Hansa States which allowed him to send his trusted advisor Johan Rantzau north with an army of Protestant German mercenaries. Clement and his army fled north, taking refuge inside the walls of Aalborg. In December, Rantzau's forces breached the walls and stormed the city. In the following days 3,000 people were massacred and the city was plundered by the Protestant German mercenaries. Clement managed to escape the slaughter, but was apprehended a few days later. He was tried and beheaded in 1535. [7]

With Jutland more or less secure, Christian next focused on gaining control of Scania. He appealed to the Protestant Swedish king Gustav Vasa for help in subduing the rebels. Gustav immediately obliged by sending two armies to ravage central Scania and Halland. The peasants suffered a bloody defeat at Loshult in Scania. The Swedes moved against Helsingborg Castle, which surrendered in January 1535 and was burned to the ground.

Rantzau moved his army to Funen and defeated Count Christopher's army at Øksnebjerg in June 1535. Count Christopher's forces held out in Malmø and Copenhagen until July 1536 when they surrendered after several months of siege by Christian II's forces. With their capitulation, Christian III was firmly placed upon Denmark's throne, and the Roman Catholic forces in Denmark were subdued.

A mutual confidence between a king who had conquered his kingdom and a people who had stood in arms against him was not attainable immediately. The circumstances under which Christian III ascended the throne exposed Denmark to the danger of foreign domination. It was with the help of the gentry of the Germanic duchies that Christian had captured Denmark. Holstein and German noblemen had led his armies and directed his diplomacy. The first six years of Christian III's reign were marked by a contest between the Danish Rigsraadet and the German counsellors, both of whom sought to rule through the king. Though the Danish party won a victory at the outset, by obtaining the insertion in the charter of provisions stipulating that only native-born Danes should fill the highest dignities of the state, the king's German counsellors continued paramount during his early reign. [8]

The triumph of Christian III would eventually bring about an end to Catholic Christianity in Denmark, but Roman Catholics still controlled the Council of State. Christian III ordered the arrest of three of the bishops on the State Council by his German mercenaries (12 August 1536).

Danish rigsdaler minted under Christian III in 1537. His coat of arms on the reverse.

Christian's debt for the Count's Feud was enormous and confiscating the Church lands (farmed by peasants who had been free from vassalage duties to the nobles) enabled him to pay down the debt to his creditors. The ultimate gainers from the confiscations were the nobles who led the New Faith imported from Germany.

Christian's Protestant policies led Denmark toward the establishment of Lutheranism as the Danish National Church (Folkekirke). This occurred officially on 30 October 1536 when the reconstituted State Council adopted the Lutheran Ordinances designed by Johannes Bugenhagen, which outlined church organization, liturgy, and accepted religious practice. Monasteries, nunneries, and priories, were closed and the property taken by the crown (see Chronicle of the Expulsion of the Grayfriars). Vast tracts of land were handed out to the king's supporters. Churches were closed, cathedral schools terminated, and recalcitrant priests turned out of their parishes. Bishops were imprisoned until they agreed to marry and give up their privileges. Some submitted after years of imprisonment; others refused to accept and became martyrs to their beliefs. 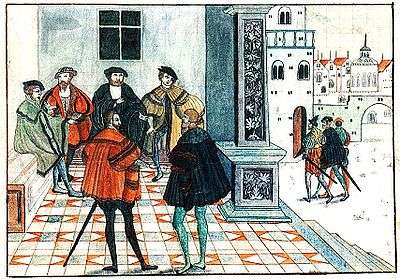 First Treaty of Brömsebro: Christian III's meeting with Gustav I of Sweden in Brömsebro, 1541 (watercolor reproduction of a lost painting made during the Swedish King's reign)

The dangers threatening Christian III from Charles V, Holy Roman Emperor and other kinsmen of the imprisoned Christian II convinced him of the necessity to lessen the discontent in the land by relying on Danish magnates and nobles. At the Herredag of Copenhagen in 1542, the nobility of Denmark voted Christian a twentieth part of all their property to pay off his heavy debt to German mercenaries. The pivot of the foreign policy of Christian III was his alliance with the German Protestant princes. This provided a counterpoise to the persistent hostility of Charles V, who was determined to support the hereditary claims of his nieces, the daughters of Christian II, to the Scandinavian kingdoms. War was declared against Charles V in 1542, and, though the German Protestant princes proved faithless allies, the closing of the Sound against Dutch shipping proved such an effective weapon in King Christian's hand that the Netherlands compelled Charles V to make peace with Denmark at the diet of Speyer, on 23 May 1544.

Partition of Holstein and Schleswig

Until this peace, Christian III ruled the entire Duchies of Holstein and of Schleswig also in the name of his then still minor half-brothers John the Elder (Hans den Ældre) and Adolf. They determined their youngest brother Frederick for a career as Diocesan administrator of an ecclesiastical state within the Holy Roman Empire.[9]

In 1544 the elder three brothers partitioned Holstein (a fief of the Holy Roman Empire) and Schleswig (a Danish fief) in an unusual way, following negotiations between the brothers and the Estates of the Realm of the duchies, which opposed a factual partition. So the revenues of the duchies were divided into three equal shares by assigning the revenues of particular areas and landed estates to each of the three brothers, while other general revenues, such as taxes from towns and customs dues, were levied together but then shared among the brothers. The estates, whose revenues were assigned to the parties, made Holstein and Schleswig look like patchworks, technically inhibiting the emergence of separate new duchies, as intended by the estates of the duchies.[10] The secular rule in the fiscally divided duchies thus became a (international law) condominium of the parties. As an effect both separate duchies, Holstein and Schleswig, with shares of each party scattered in both duchies, provided them with a condominial government binding both together, partially superseding their legally different affiliation as Holy Roman and Danish fiefs. As dukes of Holstein and Schleswig, the three brothers bore the formal title of "Duke of Schleswig, Holstein, Ditmarsh and Stormarn". John the Elder conveniently called Duke of Schleswig-Holstein-Haderslev produced no issue, so no branch emerged from his side. Adolf founded a cadet branch of the royal Danish House of Oldenburg called House of Holstein-Gottorp, a convenient usage for the technically more correct Duke of Schleswig and Holstein at Gottorp. Similarly Christian III's youngest son John the Younger gained for himself and his heirs a share in Holstein's and Schleswig's revenues in 1564, comprising a third of the royal share, a ninth of Holstein and Schleswig from a fiscal point of view. John the Younger and his heirs, however, had no share in the condominial rule. 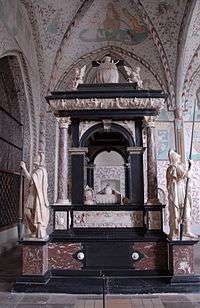 Gothic pantheon at tombs of Christian III and Frederick II

The foreign policy of Christian's later days was regulated by peace following the Treaty of Speyer (1544). He carefully avoided all foreign complications; refused to participate in the Schmalkaldic war of 1546; mediated between the emperor and Saxony after the fall of Maurice of Saxony at the Battle of Sievershausen in 1553. In February, 1555 he interceded successfully on the behalf of the English Bible translator Miles Coverdale, who had been imprisoned for two and a half years by Queen Mary I of England. Coverdale was released and allowed to leave England.[11]

King Christian III died on New Year's Day 1559 at Koldinghus and was interred in Roskilde Cathedral.[12]

Christian married Dorothea of Saxe-Lauenburg on 29 October 1525 at Lauenburg Castle.[13] They were the parents of five children;