The Orthodox Church of Estonia (Estonian: Eesti Apostlik-Õigeusu Kirik) is an autonomous Orthodox church whose primate is confirmed by the Ecumenical Patriarch of Constantinople. Under Estonian law it is the legal successor to the pre–World War II Estonian Orthodox Church, which in 1940 had had over 210,000 faithful, three bishops, 156 parishes, 131 priests, 19 deacons, two monasteries, and a theological seminary, the majority of the faithful were ethnic Estonians. Its official name in English is the Orthodox Church of Estonia.

The current primate of the church is Stephanos, Metropolitan of Tallinn and all Estonia, elected in 1999. 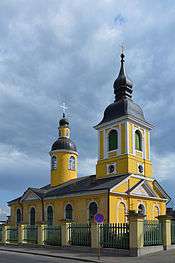 Orthodox missionaries from Novgorod and Pskov were active among the Estonians in the southeast regions of the area, closest to Pskov, in the 10th through 12th centuries. In the beginning of the 13th century, however, Estonia was conquered by the Northern Crusades, and thus fell under the control of Western Christianity. Little is known about the history of the church in the area until the 17th and 18th centuries, when many Old Believers fled there from Russia to avoid the liturgical reforms introduced by Patriarch Nikon of Moscow.

In the 18th and 19th centuries, Estonia was a part of the Russian Empire. In the 1850s a rumour spread that the Orthodox Church promised to provide everybody who converted to Orthodoxy a piece of land of their own somewhere in Russia. Some 65,000 Estonian peasants were converted to the Orthodox faith in the hope of obtaining land, and numerous Orthodox churches were built.[1] Later, when the rumour turned out to be a hoax, a great part of the new Orthodox peasants returned to the Lutheran Church.

In the late 19th century, a wave of Russification was introduced, supported by the Russian hierarchy but not by the local Estonian clergy. The Cathedral of St. Alexander Nevsky in Tallinn and the Pühtitsa (Pukhtitsa) convent in Kuremäe in East Estonia were also built around this time.

After the Estonian Republic was proclaimed in 1918, the Patriarch of the Russian Orthodox Church, St. Tikhon, in 1920 recognised the Orthodox Church of Estonia (OCE) as being autonomous in economic, administrative and educational concerns, and granted it temporary autocephaly. Archbishop Alexander Paulus was elected and ordained Metropolitan Alexander of Tallinn and All Estonia, head of the EAOC.[2]

Before 1941, one-fifth of the total Estonian population (who had been mostly Lutheran since the Reformation in the early 16th century when the country was controlled by the Teutonic Order) were Orthodox Christians under the Patriarchy of Constantinople. There were 158 parishes in Estonia and 183 clerics in the Estonian church. There was also a Chair of Orthodoxy in the Faculty of Theology at the University of Tartu. There was a Pskovo-Pechorsky Monastery in Petseri, two convents—in Narva and Kuremäe, a priory in Tallinn and a seminary in Petseri. The ancient monastery in Petseri was preserved from the mass church destructions that occurred in Soviet Russia.

In 1940, Estonia was occupied by the Soviet Union, whose government undertook a general programme of the dissolution of all ecclesiastical independence within its territory. From 1942 to 1944, however, autonomy under Constantinople was temporarily revived. In 1945, a representative of the Moscow Patriarchate dismissed the members of the OCE synod who had remained in Estonia and established a new organisation, the Diocesan Council. Orthodox believers in occupied Estonia were thus subordinated to being a diocese within the Russian Orthodox Church.

Just before the second Soviet occupation in 1944 and the dissolution of the Estonian synod, the primate of the church, Metropolitan Aleksander, went into exile along with 21 clergymen and about 8,000 Orthodox believers. The Orthodox Church of Estonia in Exile with its synod in Sweden continued its activity according to the canonical statutes, until the restoration of Estonian independence in 1991. Before he died in 1953, Metr. Aleksander established his community as an exarchate under Constantinople. Most of the other bishops and clergy who remained behind were deported to Siberia. In 1958, a new synod was established in exile, and the church was organized from Sweden.

In 1978, at the urging of the Moscow Patriarchate, the Ecumenical Patriarch declared the charter (tomos) of the Church, as granted in 1923, inoperative. The church ceased to exist until the breakup of the Soviet Union, when divisions within the Orthodox community in Estonia arose between those who claimed that the Moscow Patriarchate has no jurisdiction in Estonia and those who wished to return to the jurisdiction of Moscow. The dispute often took place along ethnic lines, as many Russians had immigrated to Estonia during the Soviet occupation. Lengthy negotiations between the two patriarchates failed to produce any agreement.

In this difficult situation, the Estonian Apostolic Orthodox Church received help and support from the Finnish Orthodox Church, especially from Archbishop Johannes (Rinne) of the Archdiocese of Karelia and All Finland and Auxiliary Bishop Ambrosius (Risto Jääskeläinen) of Joensuu. The Ecumenical Patriarchate decided that Archbishop Johannes and Bishop Ambrosius as well as pastor Heikki Huttunen from Espoo should be available to give help in the reconstruction of the newly restored church. Archbishop Johannes would temporarily act as a deputy metropolitan (1996–1999) of the Estonian Autonomous Church.[8]

An agreement was reached in which local congregations could choose which jurisdiction to follow. The Orthodox community in Estonia, which accounts for about 30 percent of the total population, remains divided, with the majority of faithful (mostly ethnic Russians) remaining under Moscow. From a U.S. Department of State report released in November 2003, about 20,000 believers (mostly ethnic Estonians) in 60 parishes are part of the autonomous church, with 150,000 faithful in 31 parishes, along with the monastic community of Pühtitsa, paying allegiance to Moscow.[9]

In 1999, the church received a resident hierarch, Metropolitan Stephanos (Charalambides) of Tallinn who had formerly been an auxiliary bishop under the Ecumenical Patriarchate's Metropolitan of France.