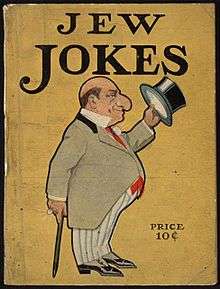 A 1908 American joke book about Jews

An ethnic joke is a remark attempting humor relating to an ethnic, racial or cultural group, often referring to an ethnic stereotype of the group in question for its punchline.

Perceptions of ethnic jokes are ambivalent. Many find them racist and offensive. On the other hand, jokes poking fun an one's own ethnicity are sometimes considered acceptable but Christie Davis challenges this notion of there being an innocuous ethnic joke.[2][3] The perceived damage to the ethnic group can be of great concern as when the ethnic Polish jokes became so common in the 1970s the Polish Ministry of Foreign Affairs approached the U.S. State Department to complain.[4]

The predominant and most widely known theory of ethnic humor attempts to discover social regularities in the anecdote traditions of different countries by contextually describing jokes. Professor Christie Davies, author of this theory, has posed the main arguments in his article Ethnic Jokes, Moral Values and Social Boundaries, published in 1982. His approach is based on Victor Raskin's (1985) Semantic Script Theory of Humor, or to be more precise, on the arguments connected with ethnic humor on binary oppositions. While Raskin merely describes the main binary oppositions providing examples (mostly from the Jewish humor), Davies explores the situations where the scripts apply; for example, he has discovered that the most common opposition, stupid/clever, is applied under particular circumstances in the social reality of two ethnic groups concerned.

Davies in his monograph published in 1990 has surmised that "Jokes in every country (or reasonably homogeneous cultural and linguistic domain) have certain targets for stupidity jokes – people who dwell on the edge of that nation or domain and who are perceived as culturally ambiguous by the dominant people of the center. In addition, they will likely be rustic people or immigrants in search of unskilled and low-prestige manual work. They are to a great extent similar to the joke-tellers themselves, share the same cultural background or even speak a similar or identical language." According to Davies, ethnic jokes are centered on the three main themes of stupidity, canniness and sexual behavior.

Davies is featured in the 2010 documentary film, Polack, exploring the source of the Polish joke.[5]

L Perry Curtis in examining ethnic humour aimed at the Irish in Victorian England describes the descent that the ethnic joke and the accompanying stereotype can undergo as the target that they are aimed at descends into depictions of violent behaviour: "My curiosity of 'Paddy's' transformation in comic art from a rather primitive, rustic, or simple-minded peasant to a degenerate man...bent on murder or outrage." [6]

There is a correlation of ethnic joke types to cultural characteristics, which may be useful in studying the history of a culture. In the category of stupid man jokes, the man's culture is very often one overrun by conquerors, e.g., Moldova, Poland, Italy, Scots-Irish, Punjabi, Oromo, Malay. In the category of stingy or canny jokes are cultures that have played the role of "middleman minority," e.g. overseas Chinese, Jews, Armenians, Gujarati. If a native of a country is asked about these two joke types, a native can usually identify one or both groups in his community. The Malay tell the canny jokes on the Chinese who live among them and the Chinese tell stupid-man jokes on the Malay. An Ethiopian will usually identify the Oromo as the subject of stupid-man jokes and the Gurage as the canny ones (which Wikipedia identifies as "skilled traders.") A third kind of ethnic joke is told only by insiders and isn't funny to outsiders. An example is the insider who dies and goes to Hell where in Russian Hell, Russians are kept screaming in a giant bowl of boiling oil by demons with pitchforks. Same with American Hell and British Hell. But in Moldovan or Punjabi Hell, same screaming in the oil but no demons, no pitchforks. "Not needed. They pull each other back in."