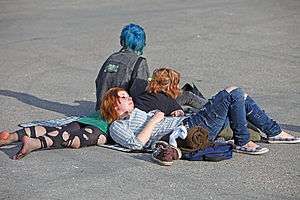 Cultural identity is the identity or feeling of belonging to a group. It is part of a person's self-conception and self-perception and is related to nationality, ethnicity, religion, social class, generation, locality or any kind of social group that has its own distinct culture. In this way, cultural identity is both characteristic of the individual but also of the culturally identical group of members sharing the same cultural identity.[1]

Modern culture is essential to our understanding of ourselves and our universe. Various modern cultural studies and social theories have investigated cultural identity. In recent decades, a new form of identification has emerged which breaks down the understanding of the individual as a coherent whole subject into a collection of various cultural identifiers. These cultural identifiers may be the result of various conditions including: location, gender, race, history, nationality, language, sexuality, religious beliefs, ethnicity, aesthetics, and even food.[2] As one author writes, recognizing both coherence and fragmentation:

The divisions between cultures can be very fine in some parts of the world, especially in rapidly changing cities where the population is ethnically diverse and social unity is based primarily on locational contiguity. .

As a "historical reservoir," culture is an important factor in shaping identity.[4] Since one of the main characteristics of a culture is its "historical reservoir," many if not all groups entertain revisions, either consciously or unconsciously, in their historical record in order to either bolster the strength of their cultural identity or to forge one which gives them precedent for actual reform or change.[5] Some critics of cultural identity argue that the preservation of cultural identity, being based upon difference, is a divisive force in society, and that cosmopolitanism gives individuals a greater sense of shared citizenship.[6] When considering practical association in international society, states may share an inherent part of their 'make up' that gives common ground and an alternative means of identifying with each other.[7] Nations provide the framework for culture identities called external cultural reality, which influences the unique internal cultural realities of the individuals within the nation.[8]

Also of interest is the interplay between cultural identity and new media.[9]

Rather than necessarily representing an individual's interaction within a certain group, cultural identity may be defined by the social network of people imitating and following the social norms as presented by the media. Accordingly, instead of learning behaviour and knowledge from cultural/religious groups, individuals may be learning these social norms from the media to build on their cultural identity.[10]

A range of cultural complexities structure the way individuals operate with the cultural realities in their lives. Nation is a large factor of the cultural complexity, as it constructs the foundation for individual’s identity but it may contrast with ones cultural reality. Cultural identities are influenced by several different factors such as ones religion, ancestry, skin colour, language, class, education, profession, skill, family and political attitudes. These factors contribute to the development of one's identity.[11]

It is also noted that an individual's "cultural arena", or place where one lives, impacts the culture that that person chooses to abide by. The surroundings, the environment, the people in these places play a factor in how one feels about the culture they wish to adopt. Many immigrants find the need to change their culture in order to fit into the culture of most citizens in the country. This can conflict with an immigrant's current belief in their culture and might pose a problem, as the immigrant feels compelled to choose between the two presenting cultures.

Some might be able to adjust to the various cultures in the world by committing to two or more cultures. It is not required to stick to one culture. Many people socialize and interact with people in one culture in addition to another group of people in another culture. Thus cultural identity is able to take many forms and can change depending on the cultural area. This plasticity is what allows people to feel like part of society wherever they go.[12]

Language develops from the wants of the people who tend to disperse themselves in a common given location over a particular period of time. This tends to allow people to share a way of life that generally links individuals in a certain culture that is identified by the people of that group. The affluence of communication that comes along with sharing a language promotes connections and roots to ancestors and cultural histories.

Language learning process can also be affected by cultural identity via the understanding of specific words, and the preference for specific words when learning and using a second language.[13]

Since many aspects of a person's cultural identity can be changed, such as citizenship or influence from outside cultures can change cultural traditions, language is a main component of cultural identity.

How great is "Achievement Loss Associated with the Transition to Middle School and High School"? John W. Alspaugh's research is in the September/October 1998 Journal of Educational Research (vol. 92, no. 1), 2026. Comparing three groups of 16 school districts, the loss was greater where the transition was from sixth grade than from a K-8 system. It was also greater when students from multiple elementary schools merged into a single middle school. Students from both K-8 and middle schools lost achievement in transition to high school, though this was greater for middle school students, and high school dropout rates were higher for districts with grades 6-8 middle schools than for those with K-8 elementary schools.[15]

Unexamined cultural identity: "a stage where one's cultural characteristics are taken for granted, and consequently there is little interest in exploring cultural issues." This for example is the stage one is in throughout their childhood when one doesn't distinguish between cultural characteristics of their household and others. Usually a person in this stage accepts the ideas they find on culture from their parents, the media, community, and others.

An example of thought in this stage: "I don't have a culture I'm just an American." "My parents tell me about where they lived, but what do I care? I've never lived there."

Cultural identity search: "is the process of exploration and questioning about one's culture in order to learn more about it and to understand the implications of membership in that culture." During this stage a person will begin to question why they hold their beliefs and compare it to the beliefs of other cultures. For some this stage may arise from a turning point in their life or from a growing awareness of other cultures. This stage is characterized by growing awareness in social and political forums and a desire to learn more about culture. This can be expressed by asking family members questions about heritage, visiting museums, reading of relevant cultural sources, enrolling in school courses, or attendance at cultural events. This stage might have an emotional component as well.

An example of thought in this stage: "I want to know what we do and how our culture is different from others." "There are a lot of non-Japanese people around me, and it gets pretty confusing to try and decide who I am."

Cultural identity achievement: "is characterized by a clear, confident acceptance of oneself and an internalization of one's cultural identity." In this stage people often allow the acceptance of their cultural identity play a role in their future choices such as how to raise children, how to deal with stereotypes and any discrimination, and approach negative perceptions. This usually leads to an increase in self-confidence and positive psychological adjustment