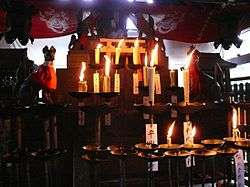 Altar to Inari Ōkami at the Fushimi Inari Shrine in Kyoto. Shinto is the ethnic religion of the Japanese people.

Ethnic religion, alongside indigenous religion, is a term used within religious studies to describe various expressions of religion associated with a particular ethnic group. Ethnic religions are often distinguished from religions which claim to not be limited in ethnic or national scope, such as Christianity or Islam.[1] Ethnic religions do not have to be excluded to independent religions. Some localized denominations of global religions are practiced solely by certain ethnic groups, with ethnic groups like the Assyrians following a unique denominational structure of Christianity known as the Assyrian Church of the East.

A number of alternative terms have been used instead of "ethnic" or "indigenous" religions.

The term "primal religion" was coined by Andrew Walls in the University of Aberdeen in the 1970s to provide a focus on non-Western forms of religion as found in Africa, Asia, and Oceania.[2] Terms such as "primal religion," "primitive religion," and "tribal religion" have been contested by Walls' student, Jim Cox, who argues that such terms suggest an undeveloped religion which can be seen as a preparation for conversion to Christianity. Cox prefers to use the term "indigenous religion."[3]

Another term that is often used is "folk religion." While "ethnic religion" and "folk religion" have overlapping uses, the latter term implies "the appropriation of religious beliefs and practices at a popular level."[4] The term "folk religion" can therefore be used to speak of Chinese and African indigenous religions, but can also refer to popular expressions of more multi-national and institutionalized religions such as Folk Christianity or Folk Islam.

Ethnic religions are distinctive in their relationship with a particular ethnic group and often in the shaping of one's solidarity with an ethnic identity.[5] Some ethnic religions can be numerically strong, for instance Hinduism of the Indians, Judaism of the Jews, Shenism of the Han Chinese, and Shinto of the Japanese. Diasporic groups often maintain ethnic religions as a means of maintaining a distinct ethnic identity, such as Hinduism among diasporic Indians in the Caribbean[6] or the role of African traditional religion among African Americans.[7]

Some ancient ethnic religions, such as those historically found in pre-modern Europe, have found new vitality in neopaganism.[8] Moreover, non-ethnic religions such as Christianity have been known to assume ethnic traits to an extent that they serve a role as an important ethnic identity marker.[9]