The Evansville Purple Aces are the intercollegiate sports teams and players of the University of Evansville, located in Evansville, Indiana, United States. The Aces athletic program is a member of the Missouri Valley Conference[1] and competes at the NCAA's Division I level.[2] Evansville's mascot is Ace Purple, and the school colors are purple, white and orange.

Moores Hill College moved to Evansville and became Evansville College in 1919. The athletics program was begun with the opening of the new campus.

A member of the Missouri Valley Conference, the University of Evansville sponsors teams in six men's and eight women's NCAA sanctioned sports:[4]

The University of Evansville's nickname, the Aces, was acquired after an opposing coach cracked a joke after losing to the Evansville College Pioneers in the 1920s. Dan Scism, the sportswriter credited with first using the name 'Aces' in headlines, said he did so at the suggestion of basketball coach John Harmon in 1926. "Prior to that the Aces had been called Pioneers," Scism said, "but Coach Harmon suggested I call them the Aces because he was told by Louisville's coach that he didn't have four aces up his sleeve, he had five!"

Forty years after Aces came into being, mascot 'Ace Purple' was created by Evansville Press artist Larry Hill. Ace Purple is a turn-of-the century riverboat gambler, appropriate since Evansville is located on the banks of the Ohio River. However, the first Ace Purple was a rough, mean-looking character who did not go over well with Aces' fans. Artist Keith Butz softened 'Ace' in 1977 into a smiling, friendly figure who remains popular with young and old alike. 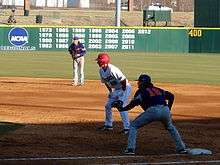 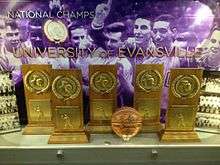 In 1977 UE began playing in NCAA Division I athletics. That same year on December 13, a chartered DC-3 carrying the entire UE basketball team crashed in a field near the Evansville Regional Airport en route to a game against Middle Tennessee State. Every member of the team and coaching staff on the plane was killed. Legendary Aces coach Arad McCutchan, had retired after the previous season and was not on the plane. McCutchan was the first NCAA College Division coach selected to the Naismith Basketball Hall of Fame.[7] One player was not able to attend the game and thus was not on the plane; not long after the plane crash, however, the player who was not on the plane was killed in a car accident along with his younger brother.

Tremendous community support brought back the basketball program the next year. Evansville was a charter member of the Midwest Collegiate Conference, now known as the Horizon League. The Aces won or shared the MCC regular season title in 1982, 1987, 1989, 1992, and 1993. They also won the conference tournament title in 1982, 1992, and 1993. The Aces are now a member of the Missouri Valley Conference, and won the 1999 regular season title.

The University of Evansville women's basketball team (the Lady Aces) have made two trips to the NCAA basketball tournament (1999, 2009).[12]

The Purple Aces were a fully funded NCAA Division I AA (now FCS) program in the non-scholarship Pioneer League until 1997. Talk existed since about 2007 about upgrading football again to a fully funded NCAA Division I team, but, after a year of investigation, the Board of Trustees voted against this in October 2012 as currently being too expensive.[13]

The athletic teams are supported by the university's dance team, cheer squad, and a pep band, the Aces Brass.