Ball State University's athletic teams are called the Cardinals. The Cardinals are part of the NCAA Division I Mid-American Conference and located in Muncie, Indiana. Charlie Cardinal is the team mascot.

The Ball State University Pride of Mid-America Marching Band performs at all home football games, many home basketball games, and various other athletic and spirit events across campus. 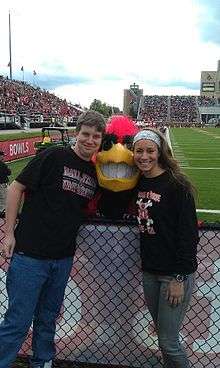 The Ball State Cardinals football team competes in Division I Football Bowl Subdivision and the Mid-American Conference. The current head coach is Pete Lembo.[3] The Cardinals play at Scheumann Stadium. On October 5, 2008, Ball State was ranked in the Associated Press Top 25 poll for the first time in team history, and reached a ranking as high as 12th in the nation during the course of the season. Ball State completed their 2008 regular season with a record of 12-1 and a conference record of 8-1. They won the MAC West Division Championship before falling to Buffalo in the MAC Championship at Ford Field in Detroit. Shortly after the departure of the head coach, Brady Hoke, Ball State lost to the University of Tulsa in the GMAC Bowl on January 6, 2009 by a score of 45-13.

The Cardinals have gone to seven Division I bowl games. They have an 0-7 record in these games being outscored by a total score of 245-124.

Ball State men's basketball is affiliated with NCAA Division I. They were founded in 1920-1921.

The Ball State Cardinals' women's basketball team won their first MAC tournament in 2009 and subsequently went to their first-ever NCAA Tournament. In the first round, they beat the Tennessee Lady Volunteers 71-55 in Bowling Green, Kentucky. 12th-seeded Ball State's win over 5th-seeded Tennessee was the Lady Volunteers' first first round loss in the 28-year history of the women's NCAA Tournament. The Cardinals earned a lot of attention for their historic first round win and briefly became the Cinderella, feel-good story of the NCAA Tournament before losing to the Iowa State Cyclones 57-71 in the second round. On March 21, 2012, Kelly Packard, the head coach, resigned[4] On May 12, 2012, Brady Sallee, the former coach at Eastern Illinois University, was named the eleventh head coach in the program's history.[5]

The Ball State baseball team plays in the MAC West Division. They play on Ball Diamond. Their head coach is Rich Maloney, who formerly coached the Cardinals, with an extended stint with the University of Michigan in between. The team began play in 1918.

Ball State athletics teams received the "Cardinals" nickname in 1927, after the name was suggested by then-athletic director Paul "Billy" Williams and voted upon by the student body. In years prior, the school's teams were known as the "Hoosieroons".[7]