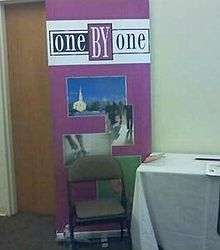 OneByOne booth at a Love Won Out conference

The ex-gay movement relies on the involvement of individuals who formerly identified as gay, lesbian, or bisexual but no longer do; these individuals may either claim that they have eliminated their attraction to the same sex altogether or simply that they abstain from acting on such attraction.

There have been various scandals related to this movement, including some self-claimed ex-gays[1] having been found in same-sex relationships despite having denied this, as well as controversies over gay minors being forced to go to ex-gay camps against their will, and overt admissions by organizations related to the movement that conversion therapy does not work.

A large body of research and global scientific consensus indicates that being gay, lesbian, or bisexual is compatible with normal mental health and social adjustment. Because of this, major mental health professional organizations discourage and caution individuals against attempting to change their sexual orientation to heterosexual, and warn that attempting to do so can be harmful.[2][3]

Various ex-gay organizations have working definitions of change. Prior to disbanding and renouncing the idea of a cure,[4] Exodus International described change as, "attaining abstinence from homosexual behaviors, lessening of homosexual temptations, strengthening their sense of masculine or feminine identity, correcting distorted styles of relating with members of the same and opposite gender."[5] People Can Change defines change as, "any degree of change toward greater peace, satisfaction and fulfillment, and less shame, depression and darkness", and emphasizes that for most people, heterosexuality is not the ultimate goal.[6] When the term ex-gay was introduced to professional literature in 1980, E. Mansell Pattison defined it as describing a person who had "experienced a basic change in sexual orientation".[7] Some ex-gays advocate entering (or remaining) in a heterosexual marriage as part of the process. Some in mixed-orientation marriages acknowledge that their sexual attractions remain primarily homosexual, but seek to make their marriages work anyway.[8]

The American Psychological Association reported that some ex-gay groups may help counteract and buffer minority stress, marginalization, and isolation[9] in ways similar to other support groups, such as offering social support, fellowship, role models, and new ways to view a problem through unique philosophies or ideologies.[10] Additionally, the same researchers also found that people joined ex-gay groups due to: a lack of other sources of social support; a desire for active coping, including both cognitive and emotional coping; and access to methods of sexual orientation identity exploration and reconstruction.[9][11][12][13] The same report found that some[12][13][14] have described the ex-gay groups as, "a refuge for those who were excluded both from conservative churches and from their families, because of their same-sex sexual attractions, and from gay organizations and social networks, because of their conservative religious beliefs."[9] According to the APA report, "Ex-gay groups appear to relieve the distress caused by conflicts between religious values and sexual orientation and help participants change their sexual orientation identity, but not their sexual orientation."[9] The APA goes on to report that some[12] believed that by, "taking on 'ex-gay' cultural norms and language and finding a community that enabled and reinforced their primary religious beliefs, values, and concerns",[9] they could resolve identity conflicts by, "(a) adopting a new discourse or worldview, (b) engaging in a biographical reconstruction, (c) embracing a new explanatory model, and (d) forming strong interpersonal ties."[9] One of the APA's sources for the report[13] found that, "ex-gay groups recast homosexuality as an ordinary sin, and thus salvation was still achievable."[9] Another one of their sources[14] is summarized as having observed that, "such groups built hope, recovery, and relapse into an ex-gay identity, thus expecting same-sex sexual behaviors and conceiving them as opportunities for repentance and forgiveness."[9] The APA report warns however that, "some [ex-gay] groups may reinforce prejudice and stigma by providing inaccurate or stereotyped information about homosexuality."[9]

The first contemporary ex-gay ministry, Love in Action, was formed in 1973.[15] Three years later, with other ex-gay organizations, it formed Exodus International, the largest ex-gay organization and the largest organization under the Exodus Global Alliance. In June 2013, the Exodus board decided to cease operations, with president Alan Chambers apologizing for the pain and hurt the group had caused and saying that he no longer believed sexual orientation could be changed.[4] Chambers apologized for what he identified as regrettable techniques, and the narrow message of a cure and marriage rather than a relationship with Christ for all.[16] Shortly after, Chambers and his wife started Speak.Love., an organisation for promoting conversations on sexual orientation for all. In September 2014, Speak.Love. was merged into Chambers' personal website.[17] Exodus Global Alliance, however, no longer affiliated with Exodus International,[18] has continued operations.

Some groups follow a specific technique, such as Homosexuals Anonymous,[19] modeled after the Alcoholics Anonymous twelve-step program. Other ex-gay organizations include Parents and Friends of Ex-Gays and Gays.

People associated with the ex-gay movement

People who no longer support the ex-gay movement

Prior to disbanding, Exodus International recommended to their members that they undertake sexual orientation change efforts, such as conversion therapy.[41] Exodus warned against going to counselors who tell a patient that they "can definitely eliminate all attractions to your same gender, or that you can definitely acquire heteroerotic attractions."[42] Evergreen International did not advocate any particular form of therapy,[43] and warns that "therapy will likely not be a cure in the sense of erasing all homosexual feelings."[44]

Sexual orientation change efforts are controversial and the American Psychological Association reported that, "the available evidence, from both early and recent studies, suggests that although sexual orientation is unlikely to change, some individuals modified their sexual orientation identity (i.e., individual or group membership and affiliation, self-labeling) and other aspects of sexuality (i.e. values and behavior)."[9] Virtually all major mental health organizations have adopted policy statements cautioning the profession and the public against treatments that purport to change sexual orientation.[45][46][47]

In 2012, the Pan American Health Organization (the North and South American branch of the World Health Organization) released a statement cautioning against services that purport to "cure" people with non-heterosexual sexual orientations as they lack medical justification and represent a serious threat to the health and well-being of affected people, and noted that the global scientific and professional consensus is that homosexuality is a normal and natural variation of human sexuality and cannot be regarded as a pathological condition. The Pan American Health Organization further called on governments, academic institutions, professional associations and the media to expose these practices and to promote respect for diversity. The World Health Organization affiliate further noted that gay minors have sometimes been forced to attend these "therapies" involuntarily, being deprived of their liberty and sometimes kept in isolation for several months, and that these findings were reported by several United Nations bodies. Additionally, the Pan American Health Organization recommended that such malpractices be denounced and subject to sanctions and penalties under national legislation, as they constitute a violation of the ethical principles of health care and violate human rights that are protected by international and regional agreements.[48]

A controversial aspect of the ex-gay movement has been the focus of some ex-gay organizations on gay teenagers, including occasions where teenagers have been forced to attend ex-gay camps against their will by their parents. A 2006 report by the National Gay and Lesbian Taskforce outlined evidence that ex-gay and conversion therapy groups were at the time increasingly focusing on children.[49] Several legal researchers[50] have responded to these events by arguing that parents who force their children into aggressive conversion therapy programs are committing child abuse under various state statutes.[51][52]

One case of emancipation involved Lyn Duff. Duff was admitted to Rivendell Psychiatric Center in West Jordan, Utah on December 19, 1991, at age fifteen, after being involuntarily transported there at her mother's behest.[53][54] Duff was subjected to a regimen of conversion therapy, including aversion therapy,[55] hypnosis, psychotropic drugs, solitary confinement, therapeutic messages linking lesbian sex with "the pits of hell",[56] behavior modification techniques, unreasonable forms of punishment for small infractions, and "positive peer pressure" group sessions in which patients demeaned and belittled each other for both real and perceived inadequacies.[53][57][58][59][60] On May 19, 1992, after 168 days of incarceration, Duff escaped from Rivendell and traveled to San Francisco, where she lived on the streets and in safe houses.[61] In 1992, Duff initiated legal action against the facility and her mother.[62]

The ex-gay organization Love in Action was involved in a controversy surrounding a teenager. In July 2005, The New York Times ran a feature story about 16-year-old Zachary Stark, whose parents forced him to attend an ex-gay camp run by the group.[63] In July 2005, Stark was released from the camp. An investigation of the camp by the Tennessee Department of Children's Services did not uncover signs of child abuse.[64] In September 2005, Tennessee authorities discovered that unlicensed staff had been administering prescription drugs. A settlement was reached shortly thereafter. LIA closed the camp in 2007.