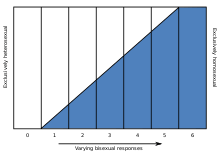 The Kinsey scale, also called the Heterosexual–Homosexual Rating Scale,[1] is used in research to describe a person's sexual orientation based on their experience or response at a given time. The scale typically ranges from 0, meaning exclusively heterosexual, to 6, meaning exclusively homosexual. In both the Male and Female volumes of the Kinsey Reports, an additional grade, listed as "X", was used to mean "no socio-sexual contacts or reactions". The reports were first published in Sexual Behavior in the Human Male (1948) by Alfred Kinsey, Wardell Pomeroy and others, and were also prominent in the complementary work Sexual Behavior in the Human Female (1953).[1]

Males do not represent two discrete populations, heterosexual and homosexual. The world is not to be divided into sheep and goats. It is a fundamental of taxonomy that nature rarely deals with discrete categories... The living world is a continuum in each and every one of its aspects.

While emphasizing the continuity of the gradations between exclusively heterosexual and exclusively homosexual histories, it has seemed desirable to develop some sort of classification which could be based on the relative amounts of heterosexual and homosexual experience or response in each history […] An individual may be assigned a position on this scale, for each period in his life. […] A seven-point scale comes nearer to showing the many gradations that actually exist.

Table of the scale

There have been similar studies where the scale is from 0 to 10. In such studies, the person would be asked a question such as "If 0 is completely gay and 10 is completely hetero, what is your orientation number?".[7] Furthermore, the additional X grade used to mean "no socio-sexual contacts or reactions" is often today described as asexuality.[8][9]

The Kinsey Scale does not address all possible sexual expressions. Others have stepped forward to define it further. In 1980, Michael Storms proposed a two dimensional chart with an X and Y axis.[10] This scale explicitly takes into account the case of asexuality and the simultaneous expression of hetero-eroticism and homo-eroticism.[11] Fritz Klein, in his Klein Sexual Orientation Grid, included factors such as how orientation can change throughout a person's lifetime, as well as emotional and social orientation.

Kinsey, Storm, and Klein are only three of more than 200 scales to measure and describe sexual orientation.[12] For example, there are scales that rate homosexual behaviors from 1 to 14, and measures for gender, masculinity, femininity, and transsexualism.[13][14]