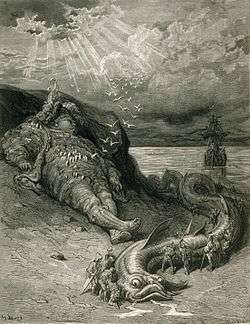 Fishing stories are often associated with exaggeration. Rabelais' Pantagruel got a sea serpent when fishing.

Exaggeration is a representation of something in an excessive manner. The exaggerator has been a familiar figure in Western culture since at least Aristotle's discussion of the alazon: 'the boaster is regarded as one who pretends to have distinguished qualities which he possesses either not at all or to a lesser degree than he pretends...exaggerating'.[1]

It is the opposite of minimisation.

Words or expressions associated with exaggeration include:

Contexts of exaggeration include:

The boasting and bragging by arrogant or manipulative people has been sent up on stage since the first appearance of the alazon – 'a stock character in Greek comedy'.[2] Inflated praise in the form of flattery and puffery has a similarly lengthy history.[3]

Amplifying achievements, obstacles and problems to seek attention is an everyday occurrence, as 'in exaggerating what one feels by magnifying the emotional expression: this is the ploy used by the six-year-old who dramatically twists her face into a pathetic frown, lips quivering, as she runs to complain to her mother about being teased'.[4]

Exaggerating is also a type of deception,[5] as well as a means of malingering – magnifying small injuries or discomforts as an excuse to avoid responsibilities.[6]

Cognitive behavioral therapy views magnification (as opposed to minimization) as unconscious, unrealistic mental processing or cognitive distortion, which can take the form of probability overestimation or of catastrophizing. This is better known as 'making a big deal out of nothing.' 'Whereas probability overestimation refers to exaggerating the "likelihood" of an event, catastrophizing refers to exaggerating the "importance" of the event'.[8] Closely related 'is overgeneralizing, where one takes a single negative event and see it as a never-ending pattern of defeat'.[9]

Another form of cognitive exaggeration is inflation of the difficulty of achieving a goal after attaining it, possibly to improve self-esteem.[10]

In depression, exaggerated all-or-nothing thinking can form a self-reinforcing cycle: these thoughts might be called emotional amplifiers because, as they go around and around, they become more intense. Here are some typical all-or-nothing thoughts:

Psychoanalysis considered that neurotic exaggerations were the products of displacement[14] – overvaluations for example being used to maintain a repression elsewhere. Thus a conflict over ambivalence may be resolved by means of exaggerating one's love for a person so as to keep an unconscious hatred in further check.[15]

The grandiose sense of self-importance observed in narcissists[16] also uses exaggeration to thwart any recognition of a moderate fallibility, seeing any departure from complete success as total and hopeless failure.[17]

"Self-dramatization, theatricality, and exaggerated expression of emotion" can be observed in those with histrionic personality disorder[16] and other Cluster B personality disorders; while "catastrophizing" is associated with depressive, neurotic or paranoid behavior – focusing on the worst possible outcome, however unlikely, or thinking that a situation is unbearable or impossible when it is really just uncomfortable.[18][19]

Münchausen syndrome by proxy is a controversial term that is used to describe a behavior pattern in which a caregiver deliberately exaggerates, fabricates, and/or induces physical, psychological, behavioral, and/or mental health problems in those who are in their care.[20]

Alarmism is excessive or exaggerated alarm about a real or imagined threat e.g. the increases in deaths from infectious disease.[21] The alarmist person is subject to the cognitive distortion of catastrophizing – of always expecting the worst of possible futures.[22] 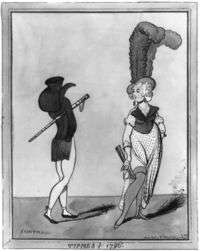 Caricature from 1796, parodying the fashion of one or two feathers issuing vertically from a woman's headdress, and women's neo-classically influenced gown styles, which were new in England in 1796)

'Some theoreticians of the comic consider exaggeration to be a universal comic device'.[23] It may take different forms in different genres, but all rely on the fact that 'the easiest way to make things laughable is to exaggerate to the point of absurdity their salient traits'.[24]

Catherine Tate is an example of a comedian who uses exaggeration. 'Catherine Tate creates characters who are so over the top as to be almost cartoon-like and this is where her genius lies. Her comedy is never meant to offend any viewer and is always based on satire and grotesque exaggeration.'[25]

A caricature can refer to a portrait that exaggerates or distorts the essence of a person or thing to create an easily identifiable visual likeness: 'disproportionately increasing and emphasizing the defects of the features'.[26] In literature, a caricature is a description of a person using exaggeration of some characteristics and oversimplification of others.[27]

Slapstick is the recourse to humor involving exaggerated physical activity which exceeds the boundaries of common sense.[28][29][30] These exaggerated depictions are often found in children's cartoons, and light film comedies aimed at younger audiences.

Paradoxical laughter is an exaggerated expression of humor which is unwarranted by external events. It may be uncontrollable laughter which may be recognised as inappropriate by the person involved. Freud considered 'the compulsive laughter which so often occurs on mournful occasions'[31] the by-product of ambivalence. 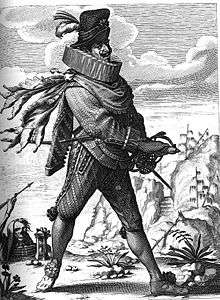 The boastful soldier or Miles Gloriosus has for thousands of years formed part of the Western stage. 'The original miles gloriosus in Plautus is a son of Jove and Venus who has killed an elephant with his fist and seven thousand men in one day's fighting. In other words, he is trying to put on a good show: the exuberance of his boasting helps to put the play over'.[32]

Overacting is the exaggeration of gestures and speech when acting. It may be unintentional, particularly in the case of a bad actor, or be required for the role. For the latter, it is commonly used in comical situations or to stress the evil characteristics of a villain. Since the perception of acting quality differs between people the extent of overacting can be subjective.

Exaggeration is an effect especially useful for animation, as perfect imitation of reality can look static and dull in cartoons.[33] The level of exaggeration depends on whether one seeks realism or a particular style, like a caricature or the style of a specific artist. The classical definition of exaggeration, employed by Disney, was to remain true to reality, just presenting it in a wilder, more extreme form.[34] Other forms of exaggeration can involve the supernatural or surreal, alterations in the physical features of a character; or elements in the storyline itself.[35] It is important to employ a certain level of restraint when using exaggeration. If a scene contains several elements, there should be a balance in how those elements are exaggerated in relation to each other, to avoid confusing or overawing the viewer.[36]

A shock jock is a type of radio broadcaster or disc jockey who entertains listeners or attracts attention using humor and/or melodramatic exaggeration that some portion of the listening audience may find offensive. 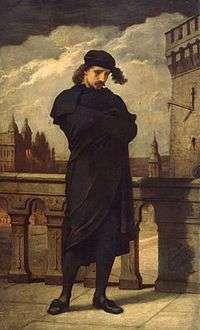 Though the boaster (alazon) is primarily a comic figure, 'the alazon may be one aspect of the tragic hero as well: the touch of miles gloriosus in Tamburlaine, even in Othello, is unmistakable, as is the touch of the obsessed philosopher in Faustus and Hamlet'.[37]

'"Expressionist art"...attempted to intensify the expression of feeling and attitude by exaggeration'.[38] In its wake, even the 'new and hard realism...kept much of the distortion and exaggeration which had been one of the chief devices of earlier Expressionism'.[39]