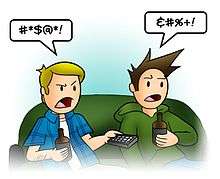 In cartoons, profanity is often depicted by substituting symbols ("grawlixes") for words.

Profanity in Modern English broadly means any sort of offensive language,[1] and that is the substance of most of this article, which relates to the definition of profanity as understood within the Anglosphere.

Originally profanity was synonymous with the religious censorship of any sort of behavior implying disrespect for anything relating to religious belief including religiously inspiring ideas, or practices deserving of reverence or things declared as sacred, as well any activities causing religious offense.[2][3]

Possibly as a result of the second commandment of Moses as translated in the English Bible in the early 17th century, profanity has come to mean any socially offensive language beyond that strictly religious sense, but tends to exclude any other nonverbal communication. Thus profanity in English may be synonymous with bad language, strong language, coarse language, foul language, bad words, vulgar language, lewd language, choice words or expletives. That is why profanity may also be described by using the names of religiously significant utterances such as to swear, to curse. or to utter an oath.[4]

Used in its vernacular English sense, profanity is a subset of that language's lexicon that is generally considered to be strongly impolite, rude or offensive. It can show a debasement of someone or something, or show intense emotion. Linguistically, profanity takes the form of words or verbal expressions that fall into the category of formulaic language.

The term "profane" originates from classical Latin "profanus", literally "before (outside) the temple". It carried the meaning of either "desecrating what is holy" or "with a secular purpose" as early as the 1450s CE.[5] Profanity represented secular indifference to religion or religious figures, while blasphemy was a more offensive attack on religion and religious figures, considered sinful, and a direct violation of The Ten Commandments. Moreover, many Bible verses speak against swearing.[6]

Profanities, in the original meaning of blasphemous profanity, are part of the ancient tradition of the comic cults, which laughed and scoffed at the deity or deities.[7][8] An example from Gargantua and Pantagruel is "Christ, look ye, its Mere de ... merde ... shit, Mother of God."[9][10][11]

In English, swear words and curse words tend to have Germanic, rather than Latin etymology. "Shit" has a Germanic root, as, probably, does "fuck".[12] The more technical alternatives are often Latin in origin, such as "defecate" or "excrete", and "fornicate" or "copulate" respectively.

Strong language is by no means a recent phenomenon. The Christian Bible records instances, such as mention of men who "eat their own dung, and drink their own piss" in the Authorized King James Version of the 1611 translation of Hebrew text of 2 Kings 18:27. Shakespeare is full of vulgarisms, though many are no longer readily recognized.

A three-country poll conducted by Angus Reid Public Opinion in July 2010 found that Canadians swear more often than Americans and British when talking to friends, while Britons are more likely than Canadians and Americans to hear strangers swear during a conversation.[14]

Swearing performs certain psychological functions, and uses particular linguistic and neurological mechanisms; all these are avenues of research. Functionally similar behavior can be observed in chimpanzees, and may contribute to our understanding, notes New York Times author Natalie Angier.[15] Angier also notes that swearing is a widespread but perhaps underappreciated anger management technique; that "Men generally curse more than women, unless said women are in a sorority, and that university provosts swear more than librarians or the staff members of the university day care center".[15]

Keele University researchers Stephens, Atkins, and Kingston found that swearing relieves the effects of physical pain.[16] Stephens said "I would advise people, if they hurt themselves, to swear".[17] However, the overuse of swear words tends to diminish this effect.[17] The Keele team won the Ig Nobel Peace Prize in 2010 for their research.

A team of neurologists and psychologists at the UCLA Easton Center for Alzheimer's Disease Research suggested that swearing may help differentiate Alzheimer's disease from frontotemporal dementia.[18]

Neurologist Antonio Damasio noted that despite loss of language due to damage to the language areas of the brain, patients were still often able to swear.[19]

A group of researchers from Kno.e.sis Research Center, Wright State University studied why people swear in the online world by collecting tweets posted on Twitter. They found that cursing is associated with negative emotions such as sadness (21.83%) and anger (16.79%) thus showing people in the online world mainly use curse words to express their sadness and anger towards others.[20][21]

An interdisciplinary team of researchers from the University of Warsaw investigated bilingual swearing: why is it easier to swear in a foreign language? Their finding that bilinguals strengthen the offensiveness of profanities when they switch into their second language, but soften it when they switch into their first tongue, but do both statistically significantly only in the case of ethnophaulisms (ethnic slurs) led the scientist to the conclusion that switching into the second language exempts bilinguals from the social norms and constraints (whether own or socially imposed) such as political correctness, and makes them more prone to swearing and offending others.[22]

The relative severity of various British profanities, as perceived by the public, was studied on behalf of the British Broadcasting Standards Commission, the ITC, the BBC, and the Advertising Standards Authority; the results of this jointly commissioned research were published in December 2000 in a paper called "Delete expletives?".[23] It listed the profanities in order of decreasing severity.

A similar survey was carried out in 2009 by New Zealand's Broadcasting Standards Authority. The results were published in March 2010, in a report called "What Not to Swear".[24] According to the Authority, the findings "measured how acceptable the public finds the use of swear words, blasphemies, and other expletives in broadcasting".

According to Steven Pinker, there are five possible functions of swearing:[25]

Swearing, in and of itself, is not a criminal offence in the United Kingdom although in context may constitute a component of a crime. In England and Wales, swearing in public where it is seen to cause harassment, alarm or distress may constitute an offence under section 5(1) and (6) of the Public Order Act 1986.[26] In Scotland, a similar common law offence of breach of the peace covers issues causing public alarm and distress.

In the United Kingdom, swearing in the workplace can be an act of gross misconduct under certain circumstances. In particular, this is the case when swearing accompanies insubordination against a superior or humiliation of a subordinate employee. However, in other cases it may not be grounds for instant dismissal.[27] According to a UK site on work etiquette, the "fact that swearing is a part of everyday life means that we need to navigate a way through a day in the office without offending anyone, while still appreciating that people do swear. Of course, there are different types of swearing and, without spelling it out, you really ought to avoid the 'worst words' regardless of who you’re talking to".[28] With respect to swearing between colleagues, the site explains that "although it may sound strange, the appropriateness [of] swearing [...] is influenced largely by the industry you are in and the individuals you work with". The site continues to explain that, even in a workplace in which swearing is the norm, there is no need to participate in it.[28] The site stresses that swearing is, in general, more problematic in asymmetric situations, such as in the presence of senior management or clients, but it also mentions that a "holier than thou" attitude towards clients may be problematic.[28]

The Guardian reported that "36% of the 308 UK senior managers and directors having responded to a survey accepted swearing as part of workplace culture", but warned about specific inappropriate uses of swearing such as when it is discriminatory or part of bullying behaviour. The article ends with a quotation from Ben Wilmott (Chartered Institute of Personnel and Development): "Employers can ensure professional language in the workplace by having a well drafted policy on bullying and harassment that emphasises how bad language has potential to amount to harassment or bullying."[29]

In countries where it is illegal to broadcast profanity on radio or television, programs can be pre-recorded or a broadcast delay device can be used to screen for, and possibly delete, profanity before it is broadcast. Songs have to be cleared of profanity before they are broadcast on radio. However, some instances of profanity, such as "bitch", "damn", "hell", and casual or irreverent use of the name of any member of the Godhead, may not be screened for or deleted.

Minced oaths are euphemistic expressions made by altering or clipping profane words and expressions, to make them less objectionable. Although minced oaths are often acceptable in situations where profanity is not (including the radio), some people still consider them profanity. In 1941, a judge threatened a lawyer with contempt of court for using the word "darn".[30][31]