This article is about the football team. For the basketball team, see FC Barcelona Bàsquet B.

Futbol Club Barcelona B is a Spanish football team based in Barcelona, in the autonomous community of Catalonia.

Founded in 1970 as FC Barcelona Atlètic, it is the reserve team of FC Barcelona, and currently plays in Segunda División B – Group 3, holding home matches at the Mini Estadi.

Reserve teams in Spain play in the same league system as the senior team, rather than in a reserve team league. They must play at least one level below their main side, and thus Barcelona B are ineligible for promotion to La Liga and cannot play in the Copa del Rey.

Founded on 1 August 1934 as Societat Esportiva Industrial Espanya, the club was originally the sports team of the factory with the same name, and its shirt featured blue and white vertical stripes. The company was owned by the family of Josep Antoni de Albert, who was briefly president of FC Barcelona in 1943; during Albert's presidency the club, now known as Club Deportivo Espanya Industrial, became Barcelona's reserve team and began to play home games at Camp de Les Corts.

Initially, Industrial played in the local regional leagues but, in 1950, it was promoted to Tercera División, reaching Segunda División two years later. In 1953 the club finished as runners-up in both the league and the promotion play-off but, being a nursery club of Barcelona, it was unable to move up a division.

Condal competed once in La Liga, in the 1956–57 season, being relegated as 16th and last. In 1968 the club rejoined the Barcelona family as its reserve team, and adopted the blaugrana colours. 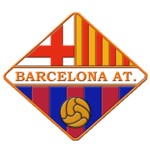 In 1970, Barcelona president Agustí Montal decided to merge Condal with another junior club, Atlètic Catalunya, and formed Barcelona Atlètic. Atlètic was founded in 1965 as a result of the merger of two other teams: UE Catalunya de Les Corts (founded in 1918 as Catalunya Sporting Club) and CD Fabra Coats (1926).

Under the new denomination the B-team played a total of ten seasons in the second level. At the end of 1988–89 the side returned to Segunda División B – the new third level created in 1977 – after ranking 17th.

In 1990 the team was renamed Barcelona B, but club president Joan Laporta changed the name back to Barcelona Atlètic in 2008. Two years later, his successor Sandro Rosell returned to the previous denomination.[2]

Former club player Luis Enrique (he also played for Real Madrid) succeeded Pep Guardiola as team manager in the summer of 2008, as the latter was appointed main squad coach.[3] In 2009–10 the club finished second in Group III and returned to division two after an absence of 11 years; this was followed by a third-place in the following campaign, but the team was not eligible for promotion. 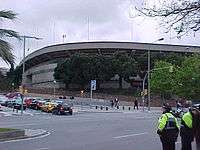 On 23 September 1982 the Mini Estadi was inaugurated by Barcelona president Josep Lluís Núñez. Next to the ground there are two training pitches, pitch 3 and 4, which have artificial turf – the latter has a regulation size of 100 x 70 metres and has seating for 1,000 spectators.

Mini Estadi has also hosted games for the Andorra national football team, and the Barcelona Dragons of American football.

Inaugurated on 26 September 1966, La Masia is the name given to Barcelona's training facilities located near the Camp Nou in the Les Corts district of Barcelona. It is an ancient country residence built in 1702 and once Camp Nou was inaugurated in 1957, the building was remodelled and extended for use as the club's social headquarters.

In 1979, La Masia became the residence of young players from outside of the city. In the following decades the academy forged several players that would later appear for both the main squad and the Spanish national team, Guillermo Amor, Albert Ferrer, Iván de la Peña, Carles Puyol, Gerard López, Xavi, Víctor Valdés, and Andrés Iniesta being amongst the most prominent.[5][6][7]