FC Energie Cottbus is a German football club based in Cottbus, Brandenburg. It was founded in 1963 as SC Cottbus in what was East Germany. After the reunification of Germany, Energie played six seasons in the third tier of the German football league system before floating between the 2. Bundesliga and Bundesliga for 17 years between 1997 and 2014. From 2014 to 2016, the club played in the third tier, 3. Liga. In the 2016-17 season, Energie Cottbus will play in the Regionalliga Nordost after being relegated.

FC Energie Cottbus can trace its roots back to a predecessor side of FSV Glückauf Brieske-Senftenberg, a club founded by coal miners in 1919, in what was then called the town of Marga. FV Grube Marga, as the club was then called, was active until 1924 when the miners left to form a new team called SV Sturm Grube Marga which was banned by the Nazi Party in 1933.

Life in the GDR

The club re-emerged after World War II in 1949 as BSG Franz Mehring Grube, becoming BSG Aktivist Brieske-Ost in 1950. The club was renamed SC Aktivist Brieske-Senftenberg in 1954 and played in the DDR-Oberliga generally earning mid-table results until calamitously falling all the way to the fourth tier Cottbus Bezirksliga in the early 1960s. The players of this side formed SC Energie Cottbus in 1963, whilst the reserve team merged back to BSG Aktivist Brieske-Ost to form BSG Aktivist Senftenberg. The club still exists as FSV Glückauf Brieske-Senftenberg today. SC Cottbus was quickly assisted by a wholesale transfer of players from BSG Aktivist Brieske-Ost ordered by the East German authorities, who often intervened in the business of the country's sports and football clubs for political reasons. East German authorities had a penchant for tagging sports teams with the names of socialist heroes: Franz Mehring was a German socialist politician and journalist.

In the mid-60s a re-organization program by the regime led to the separation of football sides from sports clubs and the creation of BSG von Bodo Krautz under the patronage of a local coal mine. The football club went by that name only briefly and was quickly renamed BSG Energie in early 1966. 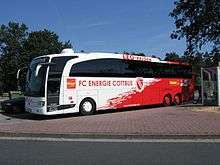 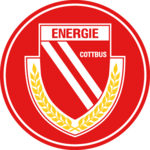 The team took on the name FC Energie in 1990 at the time of German reunification.

After years as a II division or lower-table I division side in East Germany, Energie has emerged as one of the few former DDR sides to enjoy relative prosperity in a united Germany. After six seasons playing tier III football, they earned promotion to the 2. Bundesliga in 1997, winning the Regionalliga Nordost, and then played their way into the Bundesliga in 2000, where they managed a three-year stay. A key player in their Bundesliga run was Vasile Miriuţă, an imaginative midfield player who played a big part in the team's promotion. After being relegated, Energie narrowly missed a prompt return to the top tier, losing out to 1. FSV Mainz 05 on goal differential. In season 2004–05 Energie struggled into both financial (reported debts of €4.5 million) and sports problems: the season goal of promotion was missed by far – the club escaped the relegation to third tier Regionalliga by scoring one more goal (season overall) than SV Eintracht Trier 05 while having the same amount of points and goal differential. During season the manager and the chairman were replaced. Next season (2005–06) was a much more successful one – the club returned to play in the First Division Bundesliga after winning promotion.

German Chancellor Angela Merkel is an honorary member of the club.

As of 21 August 2016[1]
Note: Flags indicate national team as defined under FIFA eligibility rules. Players may hold more than one non-FIFA nationality.

On 6 April 2001, Energie became the first Bundesliga club to field a side made up of 11 foreign players. Energie often fielded 9 or 10 foreigners that season: German players appeared a total of just 83 times, with striker Sebastian Helbig as the leader with 28.

The club's reserve team, FC Energie Cottbus II, has played as high as Regionalliga level, last playing in the Regionalliga Nordost in 2012–13. The team most recently played in the tier five NOFV-Oberliga Süd but has, in the past, also played in the northern division of the league. It first reached Oberliga level in 1998 and has won league championships in 2007 and 2010.[2][3] At the end of the 2015–16 season the team was withdrawn from competition.

In 1998 and it also won the Brandenburgischer Landespokal, the local cup competition in Brandenburg, and qualified for the first round of the DFB-Pokal through this. In 1998–99 it went out losing 1–0 to SpVgg Greuther Fürth, in 2001–02 it lost 4–0 to Arminia Bielefeld.