SV Darmstadt 98 is a German football club based in Darmstadt, Hesse. The club was founded on 22 May 1898 as FC Olympia Darmstadt. Early in 1919 the association was briefly known as Rasen-Sportverein Olympia before merging with Darmstädter Sport Club 1905 on 11 November that year to become Sportverein Darmstadt 98. Merger partner SC was the product of a 1905 union between Viktoria 1900 Darmstadt and Germania 1903 Darmstadt. The footballers are today part of a sports club which also offers its approximately 5,500 members[1] athletics, basketball, cheerleading, hiking, judo, and table tennis. 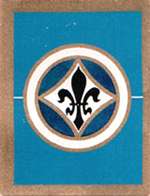 Cigarette card with the crest of the club from 1930

Olympia played as a lower table side in the Westkreisliga between 1909 and 1913. In the late 20s and early 30s the club played as SV Darmstadt in the Kreisliga Odenwald and Bezirksliga Main-Hessen, Gruppe Hesse, but struggled to stay in top flight competition. In 1933, German football was reorganized under the Third Reich into sixteen premier divisions known as Gauligen. Darmstadt was not able to break into upper league play until 1941 when they joined the Gauliga Hessen-Nassau, Gruppe 2. Their stay was short-lived and they were relegated after their second season of play at that level. By 1944–45 the division had collapsed in the face of the advance of Allied armies into Germany.

Darmstadt enjoyed a long run as a second division team through the 50s and then again from the time of the formation of the Bundesliga in 1963 on into the 70s. However, they were never better than a lower to mid-table side until they finally managed a breakthrough in 1973 with a Regionalliga Süd championship and participation in the promotion rounds for the Bundesliga where they finished a distant second to Rot-Weiss Essen.

From the Bundesliga to insolvency

A side with limited resources, Darmstadt eventually managed two seasons in the Bundesliga (1978–79 and 1981–82). They narrowly missed a third turn in the top league in 1988 when they lost in a lengthy relegation-promotion play-off to Waldhof Mannheim in extra time of the third match between the two clubs. In the following years Darmstadt 98 escaped relegation to the Amateur Oberliga Hessen (III) in 1991 when Essen was refused a 2. Bundesliga licence for financial reasons. However, by 1997, SV had themselves become victims of financial mismanagement, slipping to the third and fourth divisions.

Financial problems limited their options and they were relegated to the Oberliga Hessen (IV) at the end of the 2006–07 season. The club's stated aim was to reach the new 3. Liga within five years. However, on 6 March 2008 Darmstadt entered insolvency proceedings with debts of around €1.1 million making the future of the club uncertain. After the 2007–08 Oberliga Hessen-Championship, Darmstadt played in the Regionalliga Süd. Darmstadt took various measures to avert bankcruptcy, for example a friendly benefit match against Bayern Munich, donations etc., in addition the former management of the club (e.g. former president, former tax advisor) made vital financial contributions which secured the club's future.

Rise to the Bundesliga

After winning the 2010–11 Regionalliga Süd in dramatic fashion, Darmstadt were promoted to the 3. Liga. In 2012, Dirk Schuster was appointed as head coach, and he signed Darmstadt's future captain Aytaç Sulu. In the 2012–13 season the club was initially relegated but their fiercest rivals Kickers Offenbach were refused a 3. Liga licence due to going into administration and were relegated to the Regionalliga instead. SV Darmstadt 98 took Offenbach's place.[2]

In 2013–14 having finished third in league and thus gaining entry into the promotion-relegation play offs, Darmstadt defeated Arminia Bielefeld in the second leg through away goals after losing 1–3 in the first leg at home to secure promotion to 2. Bundesliga for the first time in 21 years in dramatic circumstances.

In the following 2. Bundesliga season Darmstadt surprised everyone by securing the 2nd spot in the league and securing promotion to the Bundesliga again after 33 years in their final league game against St. Pauli by winning 1–0 at home through a 70th minute free-kick by Tobias Kempe. This was the second consecutive promotion for the team, led again by coach Schuster, and captain Sulu.

The recent season-by-season performance of the club:[3][4]

The managers of the club:[7]