False friends are words in two languages (or letters in two alphabets)[1] that look or sound similar, but differ significantly in meaning. An example is the English embarrassed and the Spanish embarazada (which means pregnant), or the word sensible, which means reasonable in English, but sensitive in Italian, French, German and Spanish.

The term is a shortened version of the expression "false friend of a translator", the French version of which (faux amis du traducteur) was introduced by linguists Maxime Kœssler and Jules Derocquigny in 1928,[2] in the book Les Faux Amis ou les trahisons du vocabulaire anglais[3] (False Friends, or the Pitfalls of the English Vocabulary, with a sequel, Autres Mots anglais perfides).

There is often a partial overlap in meanings, which creates additional complications.

Similar words may also fail to catch all the nuances of each word in both languages. For instance, the French demande simply means a 'request', which is similar to but also very different from a demand in English and demandar in Spanish ("to sue").

The two "false friends" may actually be related, having the same origin, unlike "false cognates", which are similar words in different languages that appear to have a common historical linguistic origin (whatever their current meaning) but actually do not.

As well as producing completely false friends, the use of loanwords often results in the use of a word in a restricted context, which may then develop new meanings not found in the original language. For example, angst means "fear" in a general sense (as well as "anxiety") in German, but when it was borrowed into English in the context of psychology, its meaning was restricted to a particular type of fear described as "a neurotic feeling of anxiety and depression".[4] Also, gymnasium meant both 'a place of education' and 'a place for exercise' in Latin, but its meaning was restricted to the former in German and to the latter in English, making the expressions into false friends in those languages as well as in Greek, where it started out as 'a place for naked exercise'.[5]

False friends can cause difficulty for students learning a foreign language, particularly one that is related to their native language, because students are likely to identify the words wrongly due to linguistic interference. For this reason, teachers sometimes compile lists of false friends as an aid for their students.

However, the Armenian linguist Samuel Garibian has devised a way to make positive use of false friends in teaching English vocabulary to native Russian speakers, by grouping the English word to be learned together with its Russian false friend in a memorable, often humorous, sentence. (For example, the English word "afraid" is grouped with its Russian false friend "yefreitor" (ефрейтор), meaning "corporal", in the sentence "Вся Европа боялась одного ефрейтора" (meaning "All Europe was afraid of one corporal".) )[6]

False friends are also a frequent source of difficulty between speakers of different dialects of the same language. Speakers of British English and American English sometimes have this problem, which was alluded to in George Bernard Shaw's statement "England and America are two countries separated by a common language".[7] For example, in the UK (and in other Commonwealth countries), to "table" a motion means to place it on the agenda (to bring it to the table for consideration), while in the US it means exactly the opposite—"to remove it from consideration" (to lay it aside on the table rather than hold it up for consideration).[8] Similarly, the Spanish word limón refers to a lemon in some parts of the Spanish-speaking world but a lime in others.

A particularly troublesome case with false friends occurs when one of the two words is obscene or derogatory (a cacemphaton,[9] Greek for "ill-sounding").[10] Well-known examples are the words fag (in British English referring to a cigarette, but in American English is an offensive term for a homosexual man), root (in American and British English a verb meaning "to support, cheer", but in Australian English a verb meaning "to copulate with"), and Spanish coger (meaning 'to take' in Spain and parts of Central America, but also 'to have sex with' in Mexico and Argentina). Fagotto in Italian, Fagot in Dutch and Fagott in German all mean a bassoon, cognate to a derogatory American English term for a homosexual man. Swedish prick and Norwegian prikk means a point or dot.

手紙 means "toilet paper" in Chinese, but it means "written message" in Japanese.

In some cases this has led to significant controversy, e.g. when Tiger Woods described himself as a "spaz" which in American English simply means a "clumsy person", but in British English is an offensive term for a disabled person.[11]

From the etymological point of view, false friends can be created in several ways.

If Language A borrowed a word from Language B, or both borrowed the word from a third language or inherited it from a common ancestor, and later the word shifted in meaning or acquired additional meanings in at least one of these languages, a native speaker of one language will face a false friend when learning the other. Sometimes, presumably both senses were present in the common ancestor language, but the cognate words got different restricted senses in Language A and Language B.

Actual, which in English is usually a synonym of real, has a different meaning in other European languages, in which it means 'current' or 'up-to-date', and has the logical derivative as a verb, meaning 'to make current' or 'to update'. Actualise (or 'actualize') in English means 'to make a reality of'.[12]

The word friend itself has cognates in the other Germanic languages; but the Scandinavian ones (like Swedish frände, Danish frænde) predominantly mean 'relative'. The original Proto-Germanic word meant simply 'someone who one cares for' and could therefore refer to both a friend and a relative, but lost various degrees of the 'friend' sense in Scandinavian languages, while it mostly lost the sense of 'relative' in English. (The plural friends is still rarely used for "kinsfolk", as in the Scottish proverb Friends agree best at a distance, quoted in 1721.)

The Arabic word مخزن makhzān is used for a depot, store or warehouse, and has been borrowed in this sense in Persian (مغازه magaze), Italian (magazzino), Romanian (magazin), French (magasin), Dutch (magazijn), Greek (μαγαζί magazi), Russian (магазин magazin), Finnish (makasiini) and Spanish (almacén, with the Arabic definite article); but this sense is largely obsolete in English, in which magazine has also the meaning of 'periodic publication'. French and Serbian have doublets, related words of slightly different form with these two meanings. Several languages also use the same word or a related word for magazine (firearms).

The Finnish and Estonian languages are closely related, which gives rise to false friends:

The Italian word confetti (sugared almonds) has acquired a new meaning in English and French; in Italian, the corresponding word is coriandoli.[13]

English and Spanish, both of which have borrowed from Greek and Latin, have multiple false friends.

English and Japanese also have diverse false friends, many of them being wasei-eigo and gairaigo words. 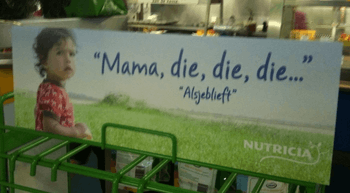 In certain cases, false friends evolved separately in the different languages. Words usually change by small shifts in pronunciation accumulated over long periods and sometimes converge by chance on the same pronunciation or look despite having come from different roots.

For example, German Rat (pronounced with a long "a") (= 'council') is cognate with English read and German and Dutch Rede (= 'speech', often religious in nature) (hence Æthelred the 'Unready' was ill-advised, and the word unready is cognate with the Dutch word onraad meaning trouble, danger), while English and Dutch rat for the rodent has its German cognate Ratte.

In another example, the word bra in the Swedish language means 'good'. Scots also has the word braw, which has much the same use and shares etymology. Swedish has also the word god, which is used primarily to describe food and drink but also in the following expression, which does not need translation into English, en god man, as in "a good song", "a good book" or "Good day!" Bra has the same meaning in Norwegian as in Swedish. In both languages Bara bra (Sw.) or Bare bra (No.) as a response to "How are you?" is very common (likewise Ha det bra as a form of "Good bye"). In English, 'bra' is short for the French brassière, which is an undergarment that supports the breasts. The full English spelling, brassiere, now rarely used, is now a false friend in and of itself (the modern French term for brassiere is soutien-gorge).

In Swedish, the word rolig means 'fun' (as in "It was a fun party"), while in the closely related languages Danish and Norwegian it means 'calm' (as in "he was calm despite all the furor around him"). However, the Swedish original meaning of 'calm' is retained in some related words such as ro, 'calmness', and orolig, 'worrisome, anxious', literally 'un-calm'.

For example, Latin P came to be written like Greek rho (written Ρ but pronounced [r]), so the Roman letter equivalent to rho was modified to R to keep it distinct.[14]

An Old and Middle English letter has become a false friend in modern English: the letters thorn (þ) and eth (ð) were used interchangeably to represent voiceless and voiced dental fricatives now written in English as th (as in thick and the). Though the thorn character (whose appearance was usually similar to the modern p) was most common, the eth could equally be used. Because of its similarity to an oblique minuscule y (particularly in blackletter), an actual Y is substituted in modern pseudo-old-fashioned usage as in Ye Olde Curiositie Shoppe; the first word means and should be pronounced the, not ye (an archaic form of you).[15]

Homoglyphs occur also by coincidence. For example, Finnish tie means "road"; the pronunciation is [tie], unlike English [tai], which in turn means "or" in Finnish.[16][17]

Pseudo-anglicisms are new words formed from English morphemes independently from an analogous English construct and with a different intended meaning.

For example, in German Handy refers to a mobile phone. Beamer refers to a computer projector or video projector rather than a car or motorcycle manufactured by BMW. In Dutch, the words "oldtimer" and "beamer" are used in the same meaning as in German.

In Norwegian, "trailer" refers to a truck and trailer, or sometimes only the truck, while "truck" means a forklift.

In French, Italian, Portuguese, German, Dutch, Polish, Russian and other European languages the tuxedo jacket is called a smoking, in Turkish smokin in Spanish it is an esmoquin. This name is in reference to the jacket’s early similarity to Victorian smoking jackets.

Japanese is replete with pseudo-anglicisms, known as wasei-eigo ("Japan-made English").

In bilingual situations, false friends often result in a semantic change — a real new meaning that is then commonly used in a language. For example, the Portuguese humoroso ('capricious') changed its referent in American Portuguese to 'humorous', owing to the English surface-cognate humorous.

Corn was originally the dominant type of grain in a region (indeed corn and grain are themselves cognates from the same Indo-European root). It came to mean usually cereals in general in the British Isles in the nineteenth century, as in the Corn laws, but maize in North America, and now often just maize also in the British Isles.

This phenomenon is analysed by Ghil'ad Zuckermann as "(incestuous) phono-semantic matching".[18]