This article is about the formal suit specifically. For a discussion of its accessories and etiquette, see Black tie. For other uses, see Tuxedo (disambiguation).

A dinner jacket (British English) or tuxedo (American English, also colloquially known as "tux"), dinner suit, or DJ is a formal evening suit distinguished primarily by satin or grosgrain facings on the jacket's lapels and buttons and a similar stripe along the outseam of the trousers.

The suit is typically black or midnight blue and commonly worn with a formal shirt, shoes and other accessories, most traditionally in the form prescribed by the black tie dress code.[1]

In Britain, the word "tuxedo" often refers to a white dinner jacket. 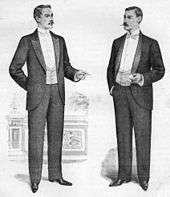 Dinner jacket in the context of menswear first appeared in England around 1887[2] and in the US around 1889.[3] In the 1960s it became associated in North America with white or coloured jackets specifically.[4]

Tuxedo in the context of menswear originated in the US around 1888.[5] It was named after Tuxedo Park, a Hudson Valley enclave for New York’s social elite where it was often seen in its early years. The term was capitalized until the 1930s and at first referred only to the jacket.[6] When the jacket was later paired with its own unique trousers and accessories in the 1900s the term began to be associated with the entire suit.[7]

In French, Italian, Portuguese, German, Polish, Russian, Turkish, and other European languages the jacket is called a smoking and in Spanish it is an esmoquin. This name is in reference to the jacket’s early similarity to Victorian smoking jackets.

The suit with accompanying accessories is sometimes nicknamed a penguin suit given its resemblance to the bird's black body and white chest. Other slang terms include monkey suit and, since 1918, soup and fish.[8][9][10]

In the 1860s, the increasing popularity of outdoor activities among the British middle and upper classes led to a corresponding increase in the popularity of the casual lounge suit (standard suit in American English) as a country alternative to the more formal day wear that was traditionally worn in town. Men also sought a similar alternative to the formal evening tailcoat (then known as a "dress coat") worn every evening.[6]

The earliest record of a tailless coat being worn with evening wear is a blue silk smoking jacket and matching trousers ordered by the Prince of Wales (later Edward VII of the United Kingdom) from Savile Row tailors Henry Poole & Co. It was tailored for use at Sandringham, the Prince's informal country estate and was described as a smoking jacket.[6]

Other accounts of the Prince's experimentation appear around 1885 variously referring to "a garment of many colours, such as was worn by our ancestors" and "short garments coming down to the waist and made on the model of the military men's jackets." The garment as we know it (suit jacket with tailcoat finishes) was first described around the same time and often associated with Cowes, an English seaside resort and centre of British yachting that was closely associated with the Prince. It was originally intended for warm weather use but soon spread to informal or stag winter occasions. As it was simply an evening tailcoat substitute, it was worn with all the same accoutrements as the tailcoat including the trousers.[11]

The earliest references to a dress coat substitute in America are from the summer and fall of 1886 and, like the British references from this time, vary between waist-length mess-jacket style and the conventional suit jacket style.[12] The most famous reference originates from Tuxedo Park, an upstate New York countryside enclave for Manhattan's wealthiest citizens. A son of one of the community’s founders, Griswold Lorillard, and his friends were widely reported in society columns for showing up at the club’s first Autumn Ball in October 1886 wearing "a tailless dress coat".[13] Although it is not known whether this garment was a mess jacket or a conventional dinner jacket, it no doubt cemented the tailcoat substitute's association with Tuxedo Park in the mind of the public.

An essay in the Tuxedo Park archives[14] attributes the jacket's importation to America to resident James Brown Potter specifically but this claim cannot be verified through independent sources.[15] Period newspaper accounts indicate that at first the jacket was worn by young mavericks to gatherings considered strictly formal. This led the American establishment to reject it out of hand. It was only by 1888 that polite society accepted its role solely as a summer and informal evening substitute at which point it became very popular.[16]

The earliest tuxedo jackets were of the same black material as the dress coat with one, two or no buttons and a shawl collar faced in satin or ribbed silk. By the turn of the twentieth century the peaked lapel was equally popular and the one-button model had become standard. When trousers were sold with the jacket they were of the same material. Edwardian dandies often opted for Oxford grey or a very dark blue for their evening wear.[17]

By World War I, the grey option had fallen out of favour but the "midnight blue" alternative became increasingly popular and rivalled black by the mid 1930s. Notch lapels, imported from the ordinary business suit, were a brief vogue in the 1920s.[18] A single stripe of braid covering the outseam on each leg was an occasional variation at first, but became standard by the 1930s. At this time double-breasted jackets and white jackets became popular for wear in hot weather.[19]

Colour, texture and pattern became increasingly popular in warm-weather jackets in the 1950s.[20] In the 1960s, these variations became increasingly common regardless of season or climate. Notch lapels were once again a fad.[18] By the 1970s, mass-market retailers began offering white and coloured versions of the entire suit to its rental customers.[21][22] The 1980s vogue for nostalgic and retro styles returned evening wear to its black tone.[23] Notch lapels returned for good in the 1980s, and in the 1990s tuxedo jackets increasingly took on other traits of the business suit, such as two- and three-button styling, flap pockets, and centre vents. These trends have continued into the early 21st century and midnight blue is now once again a popular alternative.[24]

The tuxedo’s accompaniments have also evolved over time. The most traditional interpretation of these elements – formal shirt, formal low cut waistcoat (in the "V" or "U" shape), black bow tie, formal shoes – is incorporated in the black tie dress code.

The tuxedo is a form of evening wear and as such is intended to be worn only in the evening.

The most popular uses of the tuxedo in North America at present are for formal weddings, galas, balls, formal proms and formal nights on cruises. They are also often worn by male musicians at formal concerts. In these circumstances the tuxedo's styling and accessories are most commonly chosen according to the wearer's tastes. Less popular are black tie events, such as gala fundraisers, where men typically wear more traditional tuxedos and accessories as dictated by the dress code.