Fanny and Alexander (Swedish: Fanny och Alexander) is a Swedish drama film which was released to cinemas in Sweden on 17 December 1982,[3] written and directed by Ingmar Bergman. The plot focuses on two siblings and their large family in Uppsala, Sweden in the 1900s. It was originally conceived as a four-part TV movie and cut in that version, spanning 312 minutes; a 188-minute cut version was created later for cinematic release, although this version was in fact the one to be released first. The TV version has since been released as a complete film, and both versions have been shown in theaters throughout the world. The 312-minute cut, at five hours and 12 minutes, is one of the longest cinematic films in history.

The story is set during 1907–09 (with an epilogue in 1910), in the Swedish town of Uppsala where Alexander (Bertil Guve), his sister Fanny (Pernilla Allwin) and their well-to-do family, the Ekdahls, live. The siblings' parents are both involved in theater and are happily married until their father, Oscar (Allan Edwall), suddenly dies from a stroke. Shortly thereafter, their mother, Emilie (Ewa Fröling), marries Edvard Vergérus (Jan Malmsjö), the local bishop and a widower, and moves into his ascetic home where he lives with his mother, sister, aunt and maids.

Emilie initially expects that she will be able to carry over the lavish, joyful qualities of her previous home into the marriage, but realizes that Edvard's harsh authoritarian policies are unshakable. The relationship between the bishop and Alexander is especially cold, as Alexander invents stories, for which Edvard punishes him severely. Edvard immediately confines the children to their bedroom. As a result, Emilie asks for a divorce, which Edvard will not consent to; though she may leave the marriage, legally it will be considered desertion, placing the children in his custody, including the infant to which she will shortly give birth. Meanwhile, the rest of the Ekdahl family has begun to worry about their condition. When Emilie secretly visits her former mother-in-law, Helena (Gunn Wållgren), to explain what has happened, their friend Isak Jacobi (Erland Josephson), helps smuggle the children from the house. They live temporarily with Isak and his nephews in their store.

Emilie, now in the later stages of her pregnancy, refuses to restore the children to the home. Edvard insists she do so. Emilie allows Edvard to drink a large dosage of her bromide sedative. She explains to him, as he shows signs that the medication is working, that she intends to flee the home as he sleeps. He claims that he will follow her family from city to city and ruin their lives, then blacks out. After Emilie gets away, Edvard's dying aunt knocks over a gas lamp, setting her bedclothes, nightgown and hair on fire. She runs through the house in flames to seek Edvard's help, igniting him. Despite the sedative, he is able to get her off him, but dies shortly thereafter.

Alexander had fantasized about his stepfather's death while living with Isak. Isak's mysterious nephew, Ismael Retzinsky (Stina Ekblad), explains that fantasy can become true as he dreams it.

The story ends on a happy, life-affirming note, with the christening celebration of Emilie's and the late bishop's daughter as well as the extra-marital daughter of Alexander's uncle, Gustav Adolf Ekdahl (Jarl Kulle), and the family maid, Maj (Pernilla August). Alexander encounters the ghost of the bishop who knocks him to the floor, and tells him that he will never be free. Emilie, having inherited the theatre, hands Helena a copy of August Strindberg's play A Dream Play to read, and tells her that they should perform it together onstage. Initially scoffing at the idea and declaring Strindberg a "misogynist," Helena takes to the idea and begins reading it to a sleeping Alexander. 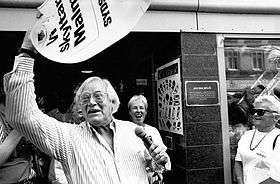 Bergman intended the film to be his last feature, although he wrote several screenplays afterward and directed a number of TV specials. This most personal of his feature films was to some extent based on his and his sister Margareta's unhappy childhood under their extremely strict father Erik Bergman, a Lutheran pastor.[4][5]

The film simultaneously documents many of Bergman's earlier star actors and a wide array of prominent Swedish film and stage actors of its era. Liv Ullmann and Max von Sydow who, as leading Bergman actors, are conspicuously absent in this respect, had been his original intended stars as Emilie and Bishop Vergerus, but Ullmann was eventually unable to join due to other work obligations, while von Sydow didn't receive notification in time, apparently through mismanagement by his American agent. Bergman instead recruited newcomer Ewa Fröling and Jan Malmsjö, who is more widely known in Sweden as a highly gifted song and dance man, but who has also done many serious character parts on stage and on the screen. Bertil Guve, who gave a widely acclaimed performance as the boy Alexander, did not choose to pursue acting, but instead became a doctor of economics. However Pernilla Wallgren (later known as Pernilla August), who played the attractive nanny Maj, went on to star in other films, including The Best Intentions which Bergman wrote.[6]

Fanny and Alexander opened to wide acclaim, and is regarded as a late masterpiece by Bergman. The film received six Academy Award nominations, including Best Director, and won four, including Best Foreign Language Film, in 1984.

Its merits are still widely discussed among film critics, provoking both strong admiration and strong criticism.

Upon its release in the U.S. in 1983, the theatrical version of Ingmar Bergman's Fanny and Alexander generated a wealth of controversy. Bergman has always seemed to breed conflict among cineastes (Phillip Lopate, for example, has written recently about the polarized reactions to Bergman in the sixties), but Fanny and Alexander, which the director announced as his final theatrical release, seemed to bring the critics out in even greater force, as though there were just the one remaining chance to be quoted on the subject. You either loved the film or hated it, and strong voices from the reviewing community lined up on either side. John Simon, in the National Review: "Few things are sadder than the attempt of a great artist, hitherto fully appreciated only by a minority, to reach the masses."[8]

The Observer quoted actor Matthew Macfadyen as saying the film "featured just the most extraordinary acting I'd ever seen". As a student, the film was shown as "an example to follow – an example of people acting with each other. They all knew each other well in real life, the cast, and they rehearsed for a long time and shot it very quickly. The result is extraordinary."[9]

Xan Brooks, in The Guardian's Film Season, chose the film as his "No 8 best arthouse film of all time". He described it as Bergman's "self-styled farewell to cinema", "an opulent family saga, by turns bawdy, stark and strange". Few films, Brooks observes, "boast as many indelible supporting characters". He concludes that "by the time this film pitches towards that astonishing climax (bedsheets burning; magic working) one might even make a case for Fanny and Alexander as Bergman's most mature, clear-sighted and fully realised work".[10]

Vincent Canby in The New York Times begins by noting that the film "it has that quality of enchantment that usually attaches only to the best movies in retrospect, long after you've seen them, when they've been absorbed into the memory to seem sweeter, wiser, more magical than anything ever does in its own time. This immediate resonance is the distinguishing feature of this superb film, which is both quintessential Bergman and unlike anything else he has ever done before." Canby finds it a "big, dark, beautiful, generous family chronicle"; the cast "are uniformly excellent". All of the film "has the quality of something recalled from a distance [,] events remembered either as they were experienced or as they are imagined to have happened. In this fashion Mr. Bergman succeeds in blending fact and fantasy in ways that never deny what we in the audience take to be truth." And, Canby emphasizes, Bergman repeatedly refers "to this little world, which in the film refers to the Ekdahls' theater, a place of melodrama, comedy, dreams, magic, and moral order, in contrast to the increasing chaos of life outside".[11]

Bergman was nominated for both Directing and Writing Original Screenplay but was not awarded. The film also received the Golden Globe Award for Best Foreign Film.

At the 19th Guldbagge Awards the film won the awards for Best Film, Best Director (Bergman) and Best Actor (Jarl Kulle).[14] It was named Best Foreign Language Film of the year by the U.S. National Board of Review of Motion Pictures.[15]

The uncut TV version of the film is available in DVD editions released by Artificial Eye (in Region 2) and The Criterion Collection (in Region 1). The Criterion Collection has released two DVD editions of the film: a five-disc set that includes the theatrical version, the television version, and a behind-the-scenes film, The Making of Fanny and Alexander as well as other supplements; and a two-disc set that includes only the 188-minute theatrical version and fewer supplements. The Criterion release marked the first time the television version of Fanny and Alexander had been available in North America.[16]

Matthew Warchus, artistic director of The Old Vic in London, announced in mid-2016 that Max Webster will direct a stage adaptation by Stephen Beresford.[17] Dates and more information to be announced.