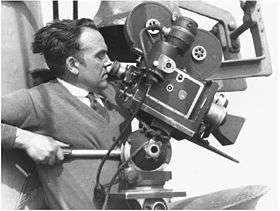 Charles Rosher, the first recipient in 1928

In its first film season, 1927–28, this award (like others such as the acting awards) was not tied to a specific film; all of the work by the nominated cinematographers during the qualifying period was listed after their names. The problem with this system became obvious the first year, since Karl Struss and Charles Rosher were nominated for their work together on Sunrise but three other films shot individually by either Rosher or Struss were also listed as part of the nomination. The second year, 1929, there were no nominations at all, although the Academy has a list of unofficial titles which were under consideration by the Board of Judges. In the third year, 1930, films, not cinematographers, were nominated, and the final award did not show the cinematographer's name.

Finally, for the 1931 awards, the modern system in which individuals are nominated for a single film each was adopted in all profession-related categories. From 1939 to 1967 (with the single exception of 1957), there were also separate awards for color and for black-and-white cinematography. Since then, the only black-and-white film to win is Schindler's List (1993).

Floyd Crosby won the award for Tabu in 1931, which was the last silent film to win in this category. Hal Mohr won the only write-in Academy Award ever, in 1935 for A Midsummer Night's Dream. Mohr was also the first person to win for both black-and-white and color cinematography.

No winners are lost, although some of the earliest nominees (and of the unofficial nominees of 1928–29) are lost, including The Devil Dancer (1927), The Magic Flame (1927), and Four Devils (1928). The Right to Love (1930) is incomplete, and Sadie Thompson (1927) is incomplete and partially reconstructed with stills.

Winners are listed first in colored row, followed by the other nominees.