The term derives from the naval custom where the commanding officer of a group of naval ships would fly a distinguishing flag. In common parlance, "flagship" is now used to mean the most important or leading member of a group, hence its various uses in broadcasting. The term is primarily used in TV and radio in the United States and Canada.

A flagship radio station is the principal station from which a radio network's programs are fed to affiliates.

In the United States, traditional radio networks currently operate without flagship stations as defined in this article. Network operations and those of the local owned-and-operated or affiliated stations in the same city are now separate and may come under different corporate entities.

In the U.S., ABC Radio programming is produced by ABC News and distributed by Cumulus Media, which owns and operates WABC in New York City and KABC in Los Angeles (among other stations). CBS Radio produces programming for distribution by Westwood One, but local stations WCBS and WINS in New York City and KNX and KFWB in Los Angeles are operated separately from the network radio news operation. Clear Channel Communications follows a similar model: flagship stations WOR/New York City (which it acquired in 2012) and KFI/Los Angeles are both operated mostly separately from its syndication wing, Premiere Networks (Premiere does produce some limited programming, including The Jesus Christ Show, The Tech Guy and Handel on the Law, through KFI).

WWRL in New York City was an affiliate of the now-defunct Air America Radio and carries some of its programs (along with those from other distributors) but is separately owned and operated and does not produce any programs for the network. Originally, Air America Radio leased WLIB (also in New York City) as its flagship station; the station was completely automated and produced no local programming. The network would later lease WZAA in Washington, D.C. as its lone self-operated station.

Former flagship stations for now-defunct networks in American radio's "Big Four" era of the 1940s–1980s were:

While CJBC remains on-air on its original frequency, it is now an owned-and-operated station of the French-language Radio-Canada network.

The CKO network's Toronto frequency was re-issued to CBL (as CBLA-FM 99.1) but the namesake CKO (AM) flagship in Montréal is silent; the frequency remains vacant.

For syndicated radio programs, it refers to the originating station from which a program is fed by satellite or other means to stations nationwide, although the show may also originate elsewhere or from a home studio via an ISDN line. Some programs such as Imus in the Morning are simulcast on television (Fox Business Network in this case). Others are simulcasted on XM Satellite Radio and / or Sirius Satellite Radio. Flagship stations of prominent syndicated radio programs currently include:

In sports broadcasting, the flagship radio station is the sports team's primary station in the team's home market that produces game broadcasts and feeds them to affiliates. For example, WJZ-FM is the radio flagship station of the Baltimore Orioles baseball team, which feeds Orioles' games to 20 stations in Maryland and adjacent states. 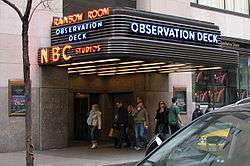 When television networks were formed in the United States in the late 1940s and grew during the early 1950s, network-owned stations in New York City became the production centers for programs originating on the East Coast, feeding affiliates of ABC, CBS, and NBC in the eastern three-fourths of the country. Stations in Los Angeles similarly started producing programs on the West Coast, feeding affiliates in the Pacific Time Zone, Alaska and Hawaii. Consequently, the networks' New York City stations became known as the "East Coast flagships" of their respective networks and the networks' Los Angeles stations became known as the "West Coast flagships".

However, before the 1950s, San Francisco was also considered a West Coast flagship market for the networks, with much of the CBS and NBC network's West Coast news programming originating from that city. This is seen the calls of CBS's KCBS (AM) being based in their original city of San Francisco instead of Los Angeles (the use of KCBS-TV in Los Angeles only dates back to 1984), while KNBR (which was subsequently sold to another party by NBC in 1987) was formerly known as KNBC before the network moved those calls to KRCA-TV in Los Angeles in 1962.

ABC, CBS and NBC are headquartered in New York City, which is the largest television market in the U.S., so their respective radio and television stations in that market are considered the overall network flagship stations. As programming schedules increased and modern technology improved transmission to affiliates, the networks set up operations centers in New York City (for the East Coast feed) and Los Angeles (for the West Coast feed). Los Angeles is the second largest television market in the U.S., and traditional home to the motion picture industry and its pool of popular talent, one of the reasons the radio networks set up operations there in the 1930s and 1940s.

This arrangement is reversed for the Fox Broadcasting Company. When Fox was launched in 1986, its network operations center was (and still is) based in Los Angeles. However, Fox's parent company, News Corporation (which spun off its broadcasting properties in July 2013 into the separate 21st Century Fox), is headquartered in New York City, along with its news division. Fox-owned WNYW in New York City is considered the network's overall flagship, while sister station KTTV in Los Angeles is considered a second flagship station.

1East Coast flagships are located in the New York City designated market area (DMA), while the West Coast flagships are located in the Los Angeles area. The CW's Philadelphia and San Francisco stations are listed as the largest CW stations owned by CBS Corporation (and thus are directly owned), while Tribune Broadcasting owns KTLA and WPIX. Miami stations are also listed for Univision, Telemundo and UniMás (formerly TeleFutura) due to their operations being major production bases for those networks. The Miami area stations for Ion Television are also listed due to their parent company being based out of West Palm Beach; however none of the Ion stations listed originate programming for the national Ion network.

2While the Virginia-based Public Broadcasting Service in the United States does not have an official "flagship" television station, WNET in the New York City area held an official primary role with PBS predecessor, National Educational Television (NET). There cannot be any owned-and-operated stations within the Public Broadcasting Service; individual PBS stations are typically owned by local non-profit groups (such as WPBS-TV), universities (such as KPBS) or state-level entities as part of a state network (such as KETA-TV and WGPB-TV). The system itself is owned collectively by the local PBS member stations. A station's importance to the system is built as much or more on the programming it produces for national distribution (a metric which places WNET as a strong third-place contender behind WGBH in Boston and WETA in Washington, D.C.) instead of local media market size.[2]

Note: All flagship stations are located in Sydney and Melbourne.

In essence, a flagship can be located in the market where the station's owner is headquartered, or in the largest market where that owner operates. For example, WSB-TV in Atlanta is the flagship of Cox Media Group, because Cox's headquarters is located in a suburb of that city. However, Cox owns WFXT in Boston, which is larger than Atlanta. The same can be said for TEGNA who lists three of its properties as its flagship stations (WXIA-TV in Atlanta, WUSA in Washington, D.C. and KUSA in Denver), but also owns WFAA in Dallas, which is larger than Atlanta, Washington D.C., and Denver in terms of Media market. Likewise, prior to merging with Gannett in 2013, WFAA served as the flagship station for Belo, as its headquarters were located in Dallas.

The term is also used for stations that operate satellite stations in other cities. For example, KSNW in Wichita, Kansas is the flagship station of the Kansas State Network, a chain of NBC affiliates serving western and central Kansas as well as border areas of Nebraska.