30 Rockefeller Plaza is an American Art Deco skyscraper that forms the centerpiece of Rockefeller Center in Midtown Manhattan, New York City. Formerly called the RCA Building from 1933 to 1988, and later the GE Building from 1988 to 2015, It was renamed the Comcast Building on July 1, 2015, following the transfer of ownership to new corporate owner Comcast. Its name is often shortened to 30 Rock. The building is most famous for housing the NBC television network headquarters. At 850 feet (260 m) high, the 70-story building is the 14th tallest in New York City and the 39th tallest in the United States. It stands 400 feet (122 m) shorter than the Empire State Building.

The building underwent a US$170 million floor-by-floor interior renovation in 2014. The renovation included new Comcast signage atop the building; new ground-level signage that reads Comcast Building; and, for the first time, the display of the iconic NBC Peacock logo on the building's exterior. 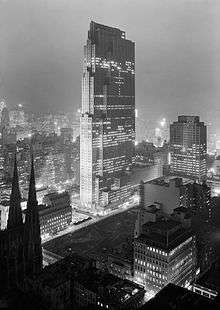 The building was completed in 1933 as part of the Rockefeller Center complex. The noted Art Deco architect Raymond Hood led a team of Rockefeller architects. It was named the RCA Building for its main tenant, the Radio Corporation of America, formed in 1919 by General Electric. It was the first building constructed with the elevators grouped in the central core. During construction, a photographer took the famous photograph Lunch atop a Skyscraper on the 69th floor.[4] The National Broadcasting Company, had the red and blue networks housed in the new building, which was also nicknamed "Radio City". NBC was the first national radio network in the country and was started by R.C.A. in 1926.

In 1985, the building acquired official landmark status. The RCA Building was renamed as the GE Building in 1988, two years after General Electric re-acquired the RCA Corporation. Some still refer to the building using its old names, out of habit or fondness.

The building's address became the title of the NBC sitcom 30 Rock (2006–2013), which follows the cast and crew of a fictional television show filmed inside the building. Aside from two live episodes, which were produced at NBC's facilities inside the building, the series used the building mostly for exterior and occasional lobby shots, while interior scenes were filmed at Silvercup Studios in Long Island City, Queens.

From the end of 1960 through October 1993, the building's mezzanine level housed the New York City weather forecast office of the National Weather Service; it was relocated to eastern Long Island, on the grounds of Brookhaven National Laboratory at Upton, New York.[6] KWO35, the NOAA Weather Radio station serving the majority of the Tri-State area, originally transmitted from atop the building and remained there until 2014. Due to interference with a U.S. Coast Guard radio channel, the transmitter was eventually relocated atop the MetLife Building.[7][8] A weather radar station was also located atop the building[9] (it was previously used as Doppler 4000 during WNBC-TV's local newscasts).

In June 2014, Comcast was granted permission from the Landmarks Preservation Commission to make modifications to the building to reflect its ownership of NBCUniversal. The GE Building would be officially known as the Comcast Building.[10][11] Comcast planned to replace the neon GE lettering from the top of the building with a 10-foot (3.0 m) tall, LED-lit Comcast wordmark and NBC logo, and add a 17-foot (5.2 m) NBC logo on the building western's facade. Additionally, a new marquee was added to the Avenue of the Americas entrance, advertising it as the home of The Tonight Show Starring Jimmy Fallon.[10][12][13] On July 1, 2015, the name change and new signage were made official.[14] 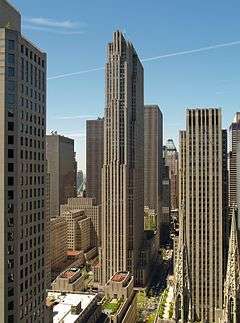 The building is one of the most famous and recognized skyscrapers in New York. The frieze located above the main entrance was produced by Lee Lawrie and depicts "Wisdom", along with a slogan that reads "Wisdom and Knowledge shall be the stability of thy times", from Isaiah 33:6 (KJV). The vertical detailing of the building's austere Art Deco facade is integrated with a slim, functionally expressive form. The present exterior is recognized for the Comcast logo with the NBC peacock at the building's top. The famous marquees above the building's 49th and 50th Street entrances have been seen on numerous television shows, such as 30 Rock and Seinfeld. Unlike most other tall Art Deco buildings constructed in the 1930s, 30 Rockefeller Plaza has no spire on its roof.

Below the building is a shopping concourse, connected to the lobby via an escalator. The open lobby's rich materials and reduced black and beige ornamental scheme is enhanced by dramatic lighting. Granite covers the building base to a height of 4 ft (1.2 m) and the shaft has a refined facade of Indiana Limestone with aluminum spandrel panels.

The 65th floor of the building is an event room and restaurant named the Rainbow Room. It was revamped and reopened to the public with new operators until it closed in 2009 due to the economic downturn. The interior of the Rainbow Room holds landmark status, awarded by the New York City Landmarks Preservation Commission in 2012.[15] Following extensive refurbishment,[16] the Rainbow Room reopened in fall 2014.[17]

This restaurant, previously run by the Cipriani family, is on the 65th floor of the Comcast Building.[18] Opened in 1934, it was the first restaurant to be located in a high-rise building and remained the highest elevated restaurant in the United States for decades. Suffering from a decline in business following the financial crisis of 2007–08, the restaurant closed in 2009. In 2012, it was declared a New York City landmark by the New York Landmarks Preservation Commission. On September 17, 2013, it was announced that the Rainbow Room would reopen in fall 2014 after undergoing a full restoration along with a new executive chef and management team.[16][19] After a years-long restoration process by Gabellini Sheppard Associates, it reopened to the public on October 5, 2014,[17] with new owner-operator Tishman Speyer and chef Jonathan Wright at the helm.[20] The renovation includes the landmarked dance floor and a new cocktail lounge called SixtyFive.[17]

The observation deck atop the skyscraper, dubbed "Top of the Rock", reopened to the public on November 1, 2005, after undergoing a $75 million renovation. It had been closed since 1986 to accommodate the renovation of the Rainbow Room. The deck, which is built to resemble the deck of an ocean liner, offers sightseers a bird's eye view of the city, competing with the 86th floor observatory of the Empire State Building 200 feet (61 m) higher. It is often considered the best panoramic city view,[21] if only because it offers a view of the aforementioned Empire State Building, which cannot be seen from its own observation deck.[22] The timed entry system and larger observation deck also results in shorter waiting times compared to the Empire State.

The "Top of the Rock" had also been co-opted for NBC's Sunday Night Football during the 2006–07 season, with the top player/MVP in that night's game according to John Madden and Al Michaels receiving the honor of being that night's "Rock Star" in the form of a glass trophy display on the observation deck; this was a replacement for the Horse Trailer Award formerly awarded on ABC's Monday Night Football. The Horse Trailer honor was restored for the 2007–08 season. 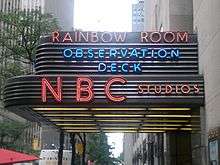 The Comcast Building is well known for housing the headquarters of NBC, the New York facilities of NBC Studios, and NBCUniversal Cable. In 1996, NBC bought the 1,600,000 square feet (150,000 m2) of space it had leased since 1933. The purchase allowed the company to introduce new technologies and renovate the space; it also gave them options to renew the lease on the Today Show studios, broadcast from a nearby building, 10 Rockefeller Plaza.[23] NBC owns floors 1–30 & 50–59.

The building's studios include Studio 8H, the home of Saturday Night Live. Studio 8H was once the largest radio studio in the world, originally home to the NBC Symphony Orchestra, conducted by Arturo Toscanini.[24] It was converted into a television studio in 1950. The Tonight Show was also taped at the GE Building in Studio 6-B from the early Jack Paar years until 1972, when the show moved to Burbank, California. In 2014, The Tonight Show returned to Studio 6-B with its latest incarnation, The Tonight Show Starring Jimmy Fallon.[25] Tonight's companion program, Late Night, now branded Late Night with Seth Meyers, has been produced from the building since it started in 1982; the relocation of Tonight back to New York in 2014 brought the two shows under one roof for the first time. During its run, Rosie O'Donnell broadcast her syndicated talk show from the building. Studio 3C is the original home of NBC Nightly News back in 1999 and later became the home of News 4 New York on WNBC in April 2012.