The Ford Windstar is a minivan that was produced and sold by Ford from the 1994 to 2004 model years. The second minivan designed by the company, it marked the transition from rear-wheel drive to front-wheel drive layouts popularized by the Chrysler minivans. Serving as a replacement for the Ford Aerostar, the two minivans were sold concurrently for three model years until the 1997 discontinuation of the Aerostar. For the 2004 model year, the Windstar was renamed the Ford Freestar.

Although sold as part of the Ford car lineup, the Windstar followed a tradition set by the Aerostar by not having a Lincoln-Mercury counterpart, being completely unrelated to the Mercury Villager. The success of the Windstar led to the first Ford-developed Mercury minivan, the Mercury Monterey.

All Windstars, Freestars, and Monterey minivans were assembled in Oakville, Ontario, Canada at the Oakville Assembly Plant.

In 1985, Ford launched the Aerostar minivan with some degree of success; while it outsold the Chevrolet Astro/GMC Safari, Volkswagen Vanagon, and its Japanese competition, it consistently remained in second place in terms of sales in the minivan segment. To better compete with Chrysler, Ford decided its next minivan would adopt the same front-wheel drive layout popularized by Chrysler.

Codenamed "WIN88", development of the front-wheel drive minivan commenced in 1988 with a projected 1993 introduction (for the 1994 model year). By 1989, design work was well underway, with a concept design theme being settled on by December 1989. In 1990, the WIN88 exterior design by Camilo Pardo was frozen for scheduled 1993 production, with prototypes being tested from early 1991. Trademarks were filed for the Windstar name at the USPTO on April 13, 1992, with development ending in late 1993.[1][2]

The all-new Windstar was released in March 1994 as a 1995 model. Its sleek design, front-wheel drive layout, and better car-like handling made it more competitive with similar offerings from Chrysler and GM. The Windstar had beaten the third-generation Chrysler minivans to the market by over a year, which played a crucial role in Ford taking significant market share in the minivan market.

For its first year on the market, the Windstar was priced above both the Aerostar and the Mercury Villager. By 1997, however, the Villager's base price had surpassed the Windstar's by several hundred dollars, and top-of-the-line Villager Nautica models were priced some $6,000 USD higher.

Standard features on the Windstar were anti-lock brakes, dual airbags, seven-passenger seating, and a 3.8 L V6 engine, borrowed from the Taurus/Sable. This engine produced 155 hp (116 kW) and 220 lb·ft (298 N·m) of torque. On cold mornings the engine will blow steam out of the slanted tailpipe. The engine also makes "bleh" sound. For its inaugural year, the Windstar was available in base GL and high-end LX trim, as well as a cargo version called Cargo Van. The postal service uses these and they do not have hubcaps. They drive them hard and hit the gas hard lurching away from complete stops similar to what they do in their "Long Life Vehicles" (LLVs) for some reason. Why they can't use a steady foot rather than an "on and off" motion while on the gas to go between mailboxes is unclear.

In a break from the Aerostar and Econoline tradition of using the traditional Ford truck XL/XLT trim nomenclature, the Windstar adopted the model hierarchy seen in the majority of the Ford car lineup. For retail sales, base trim Wagons were GL models while high-end models were given LX badging.

During and after its production, this generation of the Windstar would become known for several notable reliability issues. The 3.8 L V6 Essex engine in 1995 models was susceptible to headgasket failure, as it was its Taurus and Sable stablemates. However, the Windstar's problem was exacerbated by an even tighter engine bay and higher loads, the van being 700 pounds heavier. In response, Ford extended the warranty on the headgasket to 100,000 miles on most Windstars with this engine. The 3.0 L V6 Vulcan engine was not susceptible to headgasket failure, as it was a completely different engine design.

The Windstar was paired with an AX4S transaxle, which was prone to internal failure. The transmission suffered from cracked forward and reverse clutch pistons. These transmission failures were most susceptible with the 3.8L engine, as the transmission could not handle the extra torque and the extra vehicle weight. Windstars with the 3.0L engine could go far past 150,000 miles with regular maintenance.

The 1995–1998 Ford Windstar, which was tested as a 1996 model received a "Good" rating from the IIHS in all marks, in which the driver survives the accident without any injuries.

Released in the summer of 1998 as an early 1999 model, the Ford Windstar was given a complete redesign. As one of the first Ford vehicles in North America to adopt the New Edge styling language, the redesign also was distinguished by the addition of a driver-side sliding door. While its powertrains remained common with the Taurus/Sable, the Windstar was now built on the Ford V platform, shifting to a dedicated chassis. Several major features made their debut, including front seat-mounted side airbags, dual power-sliding doors, and rear reverse sensors.

The 2002 Windstar was the most dependable minivan on the market in the JD Powers dependability survey at three years in service in the 2005 survey. The Windstar beat out the Toyota Sienna and the Honda Odyssey for these honors.[8]

In 1999, Ford began a shift in trim levels that would be seen in many of its American-market sedans through the 2000s. In place of the GL, the LX was the new base model, with the SE and SEL making their debut as the highest trim levels, respectively.

In August 2010, Ford issued a voluntary recall of 575,000 Windstar minivans for rear axle problems. This recall followed an investigation by the National Highway Traffic Safety Administration which had begun in May 2010. The NHTSA preliminary evaluation stated the design of the rear axle beam, an inverted "U" channel design, appeared to provide a collection point for road slurry. In states which used lots of road salt, corrosion progressively weakened the axle until it fractured.[9] The states covered by the recall were Connecticut, Delaware, Illinois, Indiana, Iowa, Kentucky, Maine, Maryland, Massachusetts, Michigan, Minnesota, Missouri, New Hampshire, New Jersey, New York, Ohio, Pennsylvania, Rhode Island, Utah, Vermont, West Virginia and Wisconsin, as well as Washington D.C.[10] In May 2012, 27,000 of the minivans from Virginia were added to the axle recall, bringing the overall total to more than 600,000 vehicles between the U.S. and Canada.[11]

A class action lawsuit was filed against Ford Motor Company in May 2010 proceeding Ford's recall.[12] This lawsuit was filed by Plaintiff Aaron Martin against Defendant Ford Motor Company. In this lawsuit, documents were introduced which showed Ford's testing of the Benteler Axle in March 1998 resulted in failure of two out of the eleven axles tested. In August 1998, Ford determined the cause of this failure was improper heat treating. In September 1998, the axle manufacturer Bentley Automotive agreed with Ford's findings. In October 1999, Ford's internal documents show lab testing proved the axle life could be doubled by heat treating, but would require initial retooling cost and result in $3.45 piece cost increase. No changes were made until March 2003.[12]

In March 2011 the National Highway Traffic Safety Administration and Ford announced another Ford Windstar recall over corrosion concerns. 425,288 of the model year 1999–2003 Windstar vans originally sold or currently registered in some cold weather states are part of the recall. The problem involves rusting of the subframe. Most of the corrosion occurs on the passenger side of the subframe. If the subframe collapses while driving, the vehicle could potentially lose all steering control and end up in an accident. According to the NHTSA action #PE10026, some Ford Windstar owners had their drive axle detach from the transmission. Ford is offering alternative transportation to owners if their vehicle is unsafe to drive. If the minivan can't be repaired, Ford will repurchase the vehicle.[13]

The 1999–2003 Ford Windstar received an "Acceptable" rating by the IIHS for fair structural performance, moderate injuries to the left foot, and fair dummy control. Although most redesigned vehicles outperform their predecessors to cut down insurance costs and possible injuries to the driver, this generation Windstar did not perform as well as its first generation predecessor. The NHTSA graded the minivan an overall rating of 5 stars in both the frontal and side impact tests. 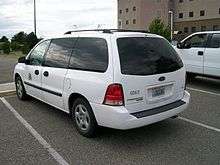 For the 2004 model year, the Windstar was redesigned inside and out. As part of a controversial company initiative to rebrand its vehicles with nameplates starting with the letter F, the Windstar name was replaced by Ford Freestar. One argued the name was changed because the "Windstar" had so many problems giving it a negative reputation. As part of a $600 million redesign, Ford focused on driveline durability, adding larger wheel bearings and heavier-duty drive axles; four-wheel disc brakes were made standard. While the 4-speed transmission was carried over, it was upgraded for improved shifting and reliability. Replacing the 3.8L V6 were a 193 hp 3.9L V6 (for U.S. sales only) and a 201 hp 4.2L V6 engine. Following the Honda Odyssey, Mazda MPV, and Toyota Sienna, the Freestar now featured a 3rd-row seat that folded into the floor.

The Freestar carried much of the trim lineup from the Windstar, with two exceptions. While the LX trim was dropped, the Sport trim became a separate trim from the SE.

The 2004–2007 Ford Freestar received a "Good" rating in the offset frontal crash test from the IIHS and outperformed the 1999–2003 Ford Windstar, but resulted in moderate injuries only on the head and neck. In the side-impact tests, it received a "Poor" rating without the optional side airbags for poor structural performance, potential head and neck injuries, and high forces on the driver's torso, but fared better with the side airbags, earning an overall "Acceptable" rating, but resulted in a moderate head and neck injury to the driver.

In 2009, the 2005 Freestar scored second place in J.D. Power's Vehicle Dependability Study, behind the Dodge Caravan.[20]

In 2004, the Mercury division replaced the discontinued Villager with its own version of the Freestar. Reviving the dormant Monterey name, the minivan was sized to compete directly against the Chrysler Town and Country and the newly introduced Buick Terraza. Differentiated from the Freestar primarily in trim options, the Monterey also came exclusively with the 4.2L V6.

The Monterey was introduced in three trim levels: Convenience, Luxury, and Premier. Features such as power-sliding doors and a rear-seat DVD player were available on Luxury and Premier trim lines. Unique to the Premier was the option of heated and cooled front seats, a class exclusive at the time. However, sales of the Monterey were very low as the design proved uncompetitive against stronger entries from other automakers, as well as an overall decline in the minivan market. Final sale numbers after a three-year run totaled 32,195.

After selling far under sales projections, Ford discontinued the Freestar and Monterey after the 2007 model year. In Mexico and export markets, the Freestar was largely replaced by the front-wheel drive version of the Ford Transit/Tourneo. In the United States and Canada, the Freestar's spot in the product line was left unfilled. The role of family vehicle in the Ford lineup would fall to the Taurus X, which was replaced by the Flex in 2009. Ironically, both vehicles functioned primarily as tall station wagons (although branded as crossover SUVs by Ford).

In 2010, Ford began imports of the Ford Transit Connect compact MPV. While also available in a passenger-van configuration, most sales were intended for cargo-van users. As part of a 2014 redesign, the Transit Connect gained a 7-passenger configuration. While it shares a nearly identical 120-inch wheelbase with the Windstar/Freestar/Monterey, most other dimensions of the 2014 Transit Connect LWB are closer in size to that of the extended-length Aerostar.

The last Mercury Monterey rolled off the assembly line on August 25, 2006

The last Ford Freestar rolled off the assembly line on December 29, 2006