Franklin Runyon Sousley (September 19, 1925 – March 21, 1945) was a United States Marine who was killed in action during the Battle of Iwo Jima in World War II. He is best known for being one of the six flag-raisers who helped raise the second U.S. flag atop Mount Suribachi on February 23, 1945 as shown in the iconic photograph Raising the Flag on Iwo Jima.

The Marine Corps War Memorial located in Arlington, Virginia, which was modeled after the flag-raising photograph, depicts bronze statues of each of the six Marine flag-raisers.

Sousley was born in Hill Top, Kentucky, the second child born to Merle Duke Sousley (1899–1934) and Goldie Mitchell (November 9, 1904 – March 14, 1988). When he was two years old, his five-year-old brother, Malcolm Brooks Sousley (November 24, 1923 – May 30, 1928), died due to appendicitis. Franklin attended a two-room schoolhouse in nearby Elizaville, and attended Fleming County High School in nearby Flemingsburg from ninth to twelfth grade. His younger brother Julian was born in May 1933, and his father died due to diabetes complications a year later, at age 35. At only nine years old, Franklin was the sole male-figure in the family, and assisted his mother in raising Julian. Julian died in a car accident on 4 October 1951, at the age of 18. Sousley graduated from Fleming High School in May 1943, and resided in Dayton, Ohio as a worker in a refrigerator factory. 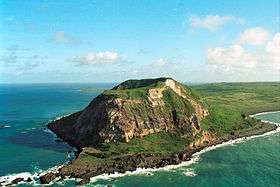 Sousley landed with his unit at the southeast end of Iwo Jima near Mount Suribachi which was the 2nd Battalion, 28th Marines objective on February 19, 1945, and fought in the battle for the capture of the island. At 8 AM, On February 23, a 40-man patrol (mostly from Third Platoon, Easy Company) led by E Company's executive officer, First Lieutenant Harold Schrier, was sent up Mount Suribachi to seize and occupy the crest. Schrier who volunteered to lead the patrol, was to raise the battalion's American flag to signal that the mountaintop was captured. The patrol reached the top and the flag was raised by Lt. Schrier, Platoon Sergeant Ernest Thomas, and Sergeant Henry Hansen approximately 10:30 AM.[1]

Around noon, Marine Sgt. Michael Strank, a squad leader of Second Platoon, Easy Company, was ordered by his company commander to take three Marines from his rifle squad and raise a larger replacement flag on top of Mount Suribachi. Strank chose Cpl. Harlon Block, Pfc. Ira Hayes, and Pfc. Franklin Sousley. On the way up the four Marines laided telephone communication wire (or took supplies up). Pfc. Rene Gagnon, the Second Battalion's runner (messenger) for Easy Company, was ordered by the battalion commander to take the replacement flag up the mountain and return with the first flag.

Sousley is included in the color film of the second flag-raising shot by Sgt. Bill Genaust, USMC, excerpted from the 1945 "Carriers Hit Tokyo" newsreel.

Once on top, Strank ordered Hayes and Sousley to find a steel pipe to attach the replacement flag unto. After a Japanese iron pipe was found and the flag attached to it, Strank, Block (Block was misidentified as Sgt. Hansen, until January 1947), Hayes, and Sousley assisted by Gagnon and Pfc. Harold Schultz (on June 23, 2016, the Marine Corps announced that Navy Corpsman John Bradley was not in Rosenthal's photo and Schultz was)[2] raised the replacement flag at approximately 1 PM as the first flagstaff was lowered under Lt. Schrier's orders. Strank had called to Gagnon and Schultz to help raise the heavy flagstaff. Once raised, the flagstaff was secured by rocks, and rope tied to it in three places (Bradley assisted some Marines in this) and staked into the ground due to the very high winds on Mount Suribachi.

The second raising was immortalized forever by the black and white photograph of the flag raising by Joe Rosenthal of the Associated Press. Marine photographer Sergeant Bill Genaust also filmed this flag raising in color. In March 1945, Genaust, Thomas and Hansen (first flag-raisers), Strank, Block, and Sousley were killed in action on Iwo Jima. 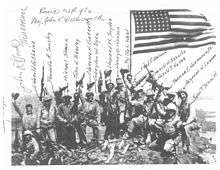 Sousley is fourth from left in "Gung Ho" photo

On March 30, 1945, the Marine Corps was ordered by President Franklin Roosevelt (after he saw Rosenthal's photo in the newspapers and the battle was over on March 26) to send the flag raisers in Rosenthal's photo to Washington D.C. to participate in a much needed war bond selling tour.[3] Strank and Block were killed on March 1 and Sousley on March 21. The book Flags of Our Fathers (2000) by James Bradley (son of Navy corpsman John Bradley who accompanied the 40-man patrol up the mountain), says Sousley was shot in the back by a Japanese sniper as he was walking down an open road which was a known area of enemy sniper fire, and speculated that he lost his focus or thought the Japanese had stopped firing. According to the book, a fellow Marine saw Sousley lying on the ground and asked, "How bad are you hit?" Sousley's last words were, "Not bad, I can't feel a thing." He then died of his injuries. However, Rene Gagnon, who knew Sousley personally for several months and saw Sousley the day he was killed, had signed an affidavit for the Marine Corps reporting that Sousley was killed instantly.

Sousley's body was originally buried at the 5th Marine Division Cemetery on the island of Iwo Jima. A service was held there in the morning of March 26 by the division's surviving Marines which included Ira Hayes and other members of Sousley's company and platoon before they departed Iwo Jima that day. Sousley's remains were reinterred on May 8, 1947, in Elizaville Cemetery in Fleming County, Kentucky. 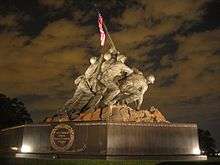 President Dwight D. Eisenhower sat upfront with Vice President Richard Nixon, Deputy Secretary of Defense Robert Anderson, and General Lemuel C. Shepherd, the 20th Commandant of the Marine Corps during the dedication ceremony. Two of the three surviving flag-raisers depicted on the monument, Ira Hayes and Rene Gagnon, were seated together with John Bradley (he was incorrectly identified as a suriviving flag-raiser)[6] in the front rows of seats along with relatives of the those who were killed in action on the island.[7] Speeches were given by Richard Nixon, Robert Anderson who dedicated the memorial, and General Shepherd who presented the memorial to the American people.[8] Inscribed on the memorial are the following words:

In the 1961 film The Outsider, starring Tony Curtis as Ira Hayes, the fictional character James B. Sorenson (Hayes's Marine buddy in the movie), portrayed by actor James Franciscus, was a composite based primarily on Franklin Sousley.

In the 2006 film Flags of Our Fathers, about the six flag raisers on Iwo Jima, Franklin Sousley was portrayed by actor Joseph Michael Cross. The film is based on the 2000 book of the same title.

PFC Sousley's service ribbons at the time of his death. The stars shown in silver were actually bronze.

There is a small Franklin Sousley memorial in the Fleming County Public Library, Flemingsburg, Kentucky.