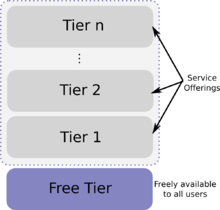 Freemium is a pricing strategy by which a product or service (typically a digital offering or application such as software, media, games or web services) is provided free of charge, but money (premium) is charged for proprietary features, functionality, or virtual goods.[1][2]

The business model called shareware has been in use for software (crippleware or freeware) since the 1980s, particularly in the form of a free time- or feature-limited ("lite") version, often given away on a floppy disk or CD-ROM, to promote a paid-for full version. The model is particularly suited to software as the cost of distribution is negligible, so little is lost by giving it away for free – as long as significant cannibalization is avoided.

The term freemium to describe this model appears to have been created only much later, in response to a 2006 blog post by venture capitalist Fred Wilson summarizing the model:[3]

Give your service away for free, possibly ad supported but maybe not, acquire a lot of customers very efficiently through word of mouth, referral networks, organic search marketing, etc., then offer premium priced value added services or an enhanced version of your service to your customer base.

Jarid Lukin of Alacra, one of Wilson's portfolio companies, then suggested the term "freemium" for this model.

In 2009, Chris Anderson published the book Free, which examines the popularity of this business model. As well as for traditional software and services, it is now also often used by Web 2.0 and open source companies.[4] In 2014, Eric Seufert published the book Freemium Economics, which attempts to deconstruct the economic principles of the freemium model and prescribe a framework for implementing them into software products.[5]

The freemium model is closely related to tiered services. It has become a highly popular model, with notable examples including LinkedIn,[6] Badoo,[7] and in the form of a "soft" paywall, such as those employed by The New York Times[8] and by Press+.[9] A freemium model is sometimes used to build a consumer base when the marginal cost of producing extra units is low.

In the Christian 503 (c) 3 religious education sector, Christian Leaders Institute (CLI) uses the freemium model to train Christian leaders. CLI offers free training to receive "unofficial" certificates, diplomas and degrees at no charge. The infrastructure cost to provide this training and these "unofficial" awards is supported by donations to the mission, which receive tax deductions in the United States. If CLI students want official awards, they are required to make minimal "non-tax deductible" donations that cover the costs of individual processing, verification, and delivery.[10]

Ways in which the product or service may be restricted in the free version include:[11]

Some software and services make all of the features available for free for a trial period, and then at the end of that period revert to operating as a feature limited free version (e.g. Online Armor Personal Firewall).The user can unlock the premium features on payment of a licence fee, as per the freemium model. Some businesses use a variation of the model known as "open core", in which the unsupported, feature-limited free version is also open source software, but versions with additional features and official support are commercial software.[12]

Other software makes its features available for trial period, and then at the end of that period it stops working (e.g. Microsoft Office 30-day trial). This is a time-limited evaluation, and at the end of the evaluation period does not work at all. This is not to be confused with the freemium model, where the user has access to a limited free version without time restraint.

In June 2011, PC World reported that traditional anti-virus software had started to lose market share to freemium anti-virus products.[13] By September 2012, all but two of the 50 highest-grossing apps in the Games section of Apple's iTunes App Store supported in-app purchases, leading Wired to conclude that game developers were now required to choose between including such purchases or foregoing a very substantial revenue stream.[14] Beginning in 2013, the digital distribution platform Steam began to add numerous Free to play and Early Access games to its library, many of which utilized Freemium marketing for their in-game economies. Due to criticism that the multiplayer games falling under this were "pay to win" in nature or were low-quality and never finished development, Valve Corporation has since added stricter rules to its Early Access and Free-to-play policies.[15]

Freemium games have come under criticism from players and critics. Many are pinned with the derogatory term 'Pay2Win', a term which criticizes freemium games for giving an advantage to players who pay more money as opposed to those who have more skill.[16][17]

Criticisms also extend to the way that the business model can often appear unregulated, to the point of encouraging prolific spending. An example of this is Smurfs' Village, which was released by Capcom as a free game tied in with the release of the 2011 film. The game was very popular, at one point overtaking Angry Birds as the top-downloaded app on the Apple iOS App Store. The game had the player buy characters and buildings using in-game currency, but more currency could be purchased with real money using account details tied to the device, using Apple's store authentication prior to purchase. Prior to changes Apple made in 2011, it was possible to use the authentication for up to fifteen minutes before having to reconfirm the password,[18] and parents had soon found that their children had used this to unwittingly incur hundreds of US dollars in charges by playing the game. A group of parents filed suit against Apple to change their practice in microtransactions to prevent this from happening in other freemium games.[19]

In 2015, Nintendo released two of their own freemium games in the Pokémon series based on other standalone purchasable titles.[21][22] Nintendo has taken a different approach with freemium games by making it possible to complete the entire game without buying premium credits, having that as an option so players can proceed through the game at a pace that suits them.[22]