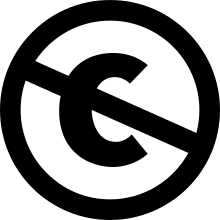 Creative Commons Public Domain Mark, indicates works that are in the public domain

Public-domain software is software that has been placed in the public domain: in other words, there is absolutely no ownership such as copyright, trademark, or patent. Software in the public domain can be modified, distributed, or sold even without any attribution by anyone; this is unlike the common case of software under exclusive copyright, where software licenses grant limited usage rights.

Under the Berne Convention, which most countries have signed, an author automatically obtains the exclusive copyright to anything they have written, and local law may similarly grant copyright, patent, or trademark rights by default. The Berne Convention also covers programs. Therefore, a program is automatically subject to a copyright, and if it is to be placed in the public domain, the author must explicitly disclaim the copyright and other rights on it in some way, e.g. by a waiver statement.[1] In some Jurisdictions, some rights (in particular moral rights) cannot be disclaimed: for instance, civil law tradition-based German law's "Urheberrecht" differs here from the Anglo-saxon common law tradition's "copyright" concept.

In the 1950s to the 1990s software culture, as original academic phenomena, "public-domain" (usually abbreviated to "PD") software was popular. This kind of freely distributed and shared "free software" combined the nowadays differentiated software classes of freeware, shareware and free and open-source software and was created in academia, and by hobbyists and hackers.[2] As software was often written in an interpreted language such as BASIC, the source code was needed and therefore distributed to run the software. PD software was also shared and distributed as printed source code (type-in program) in computer magazines (like Creative Computing, SoftSide, Compute!, Byte etc.) and books, like the bestseller BASIC Computer Games.[3] Early on, closed-source software was uncommon until the mid-1970s to the 1980s.

Before 1974, when the US Commission on New Technological Uses of Copyrighted Works (CONTU) decided that "computer programs, to the extent that they embody an author's original creation, are proper subject matter of copyright",[4] software was not copyrightable and therefore always in public domain. This legislation, plus court decisions such as Apple v. Franklin in 1983 for object code, clarified that the Copyright Act gave computer programs the copyright status of literary works.

The public-domain "free sharing" and "donationware" commercialization models evolved in following years to the (non-voluntary) shareware model,[7][8] and software free of charge, called freeware.[9] Additionally, due to other changes in the computer industry, the sharing of source code became less usual.[10]

With the Berne Convention Implementation Act of 1988 (and the earlier Copyright Act of 1976), the legal base for public-domain software changed drastically. Before the act, releasing a software without copyright notice was enough for dedicating to public domain. With the new copyright act, software was by default copyright-protected and needed an explicit waiver statement or license of the author.[11][12]

Reference implementations of algorithms, often cryptographic algorithms, meant or applied for standardization are still often given into the public domain, examples are CERN's httpd[13] in 1993 and Serpent cipher in 1999. The Openwall Project maintains a list of several algorithms and their source code in the public domain.[14]

Free and open-source software as successor

As response in the end 1980s of the academic software ecosystem to the change in the copyright system, permissive license texts were developed, like the BSD license and derivatives. Permissive-licensed software, which is a kind of free and open-source software, shares most characteristics of the earlier public-domain software, but stands on the legal base of copyright law.

With the 2000s and the emerge of peer-to-peer sharing networks and sharing in web development, a new copyright-critical developer generation made the "license-free" public-domain software model visible again, also criticizing the FOSS license ecosystem ("Post Open Source") as stabilizing part of the copyright system.[16][17][18][19] New non-FOSS licenses and waiver texts were developed, notable the Creative Commons "CC0" (2009) and the "unlicense" (2010), and a growing popularity of permissive software licenses was noticed. Also, the growing problem of orphaned software and digital obsolescence of software raised the awareness of the relevance of passing software into PD again for a better digital preservation of the digital heritage, unrestricted by copyright and DRM.[20][21][22][23]

Around 2004 there was a debate whether public-domain software can be considered part of the FOSS ecosystem, as lawyer Lawrence Rosen argued in the essay "Why the public domain isn't a license" that software could not truly be given into public domain,[24] a position that faced opposition by Daniel J. Bernstein and others.[25] In 2012, the status was finally resolved when Rosen changed his mind and accepted the CC0 as open-source license, while admitting that contrary to previous claims copyright can be waived away, backed by a Ninth circuit's decision.[26]

Passing of software into public domain

Before the Berne Convention Implementation Act of 1988 (and the earlier Copyright Act of 1976, which went into effect in 1978) works could be easily given into the public domain by just releasing it without an explicit copyright notice. After that, all works were by default copyright-protected and needed to be actively given into public domain by a waiver statement.[11][12]

In 2000 the WTFPL was released as public-domain-like license/waiver/anti-copyright notice.[31] In 2009 the Creative commons released the CC0, which was created for compatibility with also law domains (e.g. Civil law of continental Europe) where dedicating into public domain is problematic. This is achieved by a public-domain waiver statement and a fall-back all-permissive license, for the case the waiver is not possible.[32][33] The Unlicense, published around 2010, has a focus on an anti-copyright message. The unlicense offers a public-domain waiver text with a fall-back public-domain-like license inspired by permissive licenses but without attribution clause.[34][35] In 2015 Github reported that of their approx. 5.1 million licensed projects hosted almost 2% use the unlicense, approx. 102,000 projects.[36]

Public domain software in the early computer age was for instance shared as type-in program in computer magazines and books like BASIC Computer Games. Explicit PD waiver statements or license files were at that time unusual. Publicly available software without a copyright notice was assumed to be, and shared as, public-domain software.

Notable general PD software from that time include:

Video games are among the earliest examples of shared PD software, which are still notable today:

Many PD software authors kept the practices of public-domain release without having a waiver text, not knowing or caring for the changed copyright law and creating therefore a legal problem. On the other hand, magazines started in the mid-1980s to claim copyright even for type-in programs that were seen as PD before.[41][42] Only slowly PD software authors started to include explicit relinquishment or license statement texts.

These examples of modern PD software (after the Berne Convention Implementation Act of 1988) is either under proper public domain (e.g. created by an US governmental organization), under a proper public-domain-like license (for instance CC0) or accompanied by a clear waiver statement from the author. While not as widespread as in the pre-2000s, PD software still exists nowadays. For example, Sourceforge listed 334 hosted PD projects in 2016,[43] GitHub 102,000 PD projects under the unlicense alone in 2015.[36] In 2016 an analysis of the Fedora Project's packages revealed "public domain" as seventh most popular "license".[44]

The award-winning video game developer Jason Rohrer releases his works into the PD, as does Daniel J. Bernstein with his reference implementations of cryptographic algorithms.