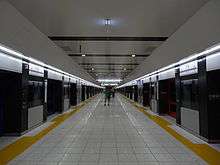 Fuda Station is served by the Keio Line, and is located 14.9 kilometers from the starting point of the line at Shinjuku Station.

This station consists of one underground island platform serving two tracks, with the station building located above[2] The underground tracks opened on August 19, 2012 replacing the ground-level tracks.[3] The platform is equipped with automatic platform screen doors.

The station opened in 1917, and was relocated to its present location in 1927. It was rebuilt as an underground station in 2012.