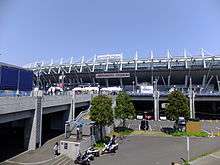 Tokyo Stadium (東京スタジアム, Tōkyō Sutajiamu) is a multi-purpose stadium in Chōfu, Tokyo, Japan. The stadium was founded at Kantō Mura, the redevelopment area formerly used by United States Forces Japan, in March 2001. It was the first stadium in Japan that offered its naming rights, which were sold to Ajinomoto Co., Inc. with a 5-year 1.2 billion yen (about 10 million U.S. dollars) contract, from March 2003 to February 2008. This contract was renewed on November 2007 and extended by 6 years for 1.4 billion yen to February 2014.[2] As a result, it is now named Ajinomoto Stadium (味の素スタジアム, Ajinomoto Sutajiamu).

The stadium is the home of J. League Division 1 football club F.C. Tokyo and J. League Division 2 football club Tokyo Verdy and is used as the venue of some lower divisions of football leagues. Rugby union and American football games are also held there. For the 2002 FIFA World Cup, Saudi Arabia's national team based their training camp at Chōfu and used the stadium as a main training ground, although it did not host an actual World Cup match.

The stadium is often used for non-sport events, such as concerts and flea markets. It has been used as a shelter for survivors of the 2011 Tōhoku earthquake and tsunami.[3] The stadium is one of the planned football venues for the 2020 Summer Olympics.[4] During the Olympics, the stadium will be known as Tokyo Stadium due to International Olympic Committee's non-commercialization policy (if at the time of the Olympics there are naming rights to the stadium). The stadium has also been announced as one of the venues for 2019 Rugby World Cup and will host the opening ceremony as well as opening match of the tournament.[5]

The north end of the stadium adjoins the Chofu Airport, while Route 20 runs close to the south end. At the south end is the main gate, which is directly connected by a pedestrian bridge over Route 20.

The whole of the upper level, as well as upper tiers of the lower level, is covered by roof, which is made of Teflon (main and back) and polycarbonate (both sides). The main stand houses media and hospitality boxes, VIP rooms and reception hall. Two large LED displays are installed at both sides.

The ground was originally designed for both athletics and football games. However, the construction of the supplementary ground, which is needed for compliance with 1st-grade athletic grounds in Japan, has been postponed. The management company has decided to use the ground mainly for football, and not to install a running track until the supplementary pitch has been added. Currently artificial turf is laid down all over the ground except the football field area, over which natural turf is spread. Consequently, there is some room between the football pitch and the stand.

In order to comply with height limitation close to the airport, the pitch is sunk below the level of the land around the stadium.