Fussballclub Zürich, commonly abbreviated to FC Zürich, FCZ or simply Zürich, is a Swiss football club from the city of Zürich, currently playing in the Challenge League, the second tier in the Swiss football league system. The club was founded in 1896 and have won the Swiss Super League 12 times and the Swiss Cup nine times. The club won the 2009 Swiss Super League and last won the Swiss Cup in 2016. They play their home games at the Letzigrund in Zürich, which seats 25,000. For the women's team see FC Zürich Frauen.

The club was founded on 1 August 1896 by former members of the three local clubs (FC Turicum, FC Viktoria, and FC Excelsior). One of them was the FC Barcelona founder, Joan Gamper.

Until the 1930s, the club's sporting remit also included rowing, boxing, athletics, and handball, but later focused solely on football.

Following the club's league title in 1981, the club went into a decline and in 1988 they were relegated to the Nationalliga B. Zürich returned to the top league in 1990. The club did make it to last 16 of the UEFA Cup 1998–99, but were beaten by Roma. The club won the Swiss Cup in 2000, beating Lausanne in the final and also in 2005 beating Luzern.

On 13 May 2006, FCZ ended their 25 years wait for a league title with a dramatic final day victory against FC Basel to win the Super League. They won thanks to a goal scored in the 93rd minute by Iulian Filipescu. The goal gave FCZ a 2 – 1 victory and secured the title on goal difference over FC Basel. In 2006–07, they also won the league.

In the 2015–16 season the club finished last, one point behind FC Lugano and was relegated to the Swiss Challenge League. Four days after the final game of the season FCZ won the Swiss Cup beating FC Lugano 1:0. 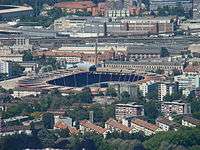 Local club Grasshopper, along with FC Basel, are the main rivals of FCZ. Due to the intense rivalry, these matches are so-called "High Risk Games," with an increased police presence in and around the stadium.

Before the last round of the 2005–06 Swiss Super League, Zürich were three points behind FC Basel in the league table. The last game of the season was contested by these two clubs vying for the league title at St. Jakob Park, Basel. Alhassane Keita scored the first goal for Zürich. In the second half, Mladen Petrić equalised. FC Basel were seconds away from the title when in the 93rd minute, Florian Stahel passed the ball to Iulian Filipescu, who scored and made it 2 – 1 for Zürich. Zürich won the league title due to their superior goal difference. After the final whistle, the field was stormed by Basel supporters who also attacked Zürich players (see 2006 Basel Hooligan Incident).

Players and managers admitted to the FC Zurich Hall of Fame

Players with World Cup appearances for their national teams