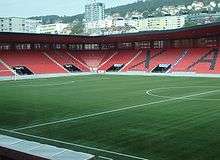 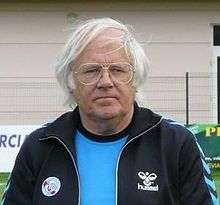 Neuchâtel Xamax FCS (pronounced: [nøʃatɛl ksamaks]) is a Swiss football club, based in Neuchâtel. It was created in 1970 through a merger between FC Cantonal, founded in 1906 and Swiss champions of 1916, and FC Xamax founded in 1912. The name Xamax comes from legendary Swiss international 'Xam' Max Abegglen, one of the founding members.[1] Xamax Neuchâtel FCS obtained its current name after a merger with FC Serrières, another side from Neuchâtel, in May 2013. The club plays its home matches at the Stade de la Maladière, which was opened in 2007 and has a capacity of 12,500 spectators.

After many financial crises, the club declared bankruptcy on 26 January 2012 and was consequently excluded from Swiss Super League.[2] The club was reformed, but had to restart in the Swiss amateur leagues, entering the 2. Liga Interregional, the fifth tier of the Swiss football league system, for the 2012–13 season.[3] The club finished first in 2013 and was promoted to the 1. Liga Classic for 2013–14. Once again, Xamax finished first, winning the play-off to secure a second successive promotion. Xamax finally won 1. Liga Promotion, the third tier of Swiss league system and promoted to Challenge League after making third successive promotion in 2014–15 season.

As of 7 July, 2016. Note: Flags indicate national team as defined under FIFA eligibility rules. Players may hold more than one non-FIFA nationality.