Football Club Gandzasar Kapan (Armenian: Ֆուտբոլային Ակումբ Գանձասար Կապան), commonly known as Gandzasar, is an Armenian football club based in the town of Kapan, Syunik Province. Translated from the Armenian, "Gandz-a-sar" simply means "Treasure Mountain". The club headquarters are located on Shinararner street 1, Kapan.[1] The Gandzasar Kapan Training Centre is located at the outskirts of Kapan.

The club is under the ownership of «Zangezur Copper and Molybdenum Combine» Closed Joint-Stock Company since 25 February 2015.

As of 2014, Gandzasar Kapan play in the Armenian Premier League, the top division in Armenian football. The home ground of team is the Gandzasar Stadium.

The club also runs a reserve team known as Gandzasar Kapan-2, participating in the First Division. 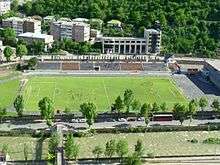 Gandzasar Stadium, the home of Gandzasar

The club play their home games at the Gandzasar Stadium, also known as Kapan City Stadium, which has a capacity of 3,500. 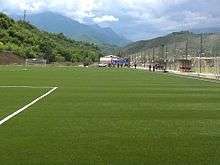