This norm of reaction shows lines that are not parallel indicating a gene by environment interaction. Each genotype is responding to environmental variation in a different way.

There are two different conceptions of gene–environment interaction. Tabery[6] has labeled them biometric and developmental interaction, while Sesardic[7] uses the terms statistical and commonsense interaction.

The biometric (or statistical) conception has its origins in research programs that seek to measure the relative proportions of genetic and environmental contributions to phenotypic variation within populations. Biometric gene–environment interaction has particular currency in population genetics and behavioral genetics.[6] Any interaction results in the breakdown of the additivity of the main effects of heredity and environment, but whether such interaction is present in particular settings is an empirical question. Biometric interaction is relevant in the context of research on individual differences rather than in the context of the development of a particular organism.[8] 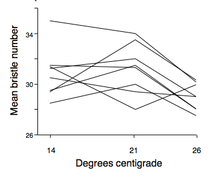