This article is about the biological process. For the band, see Morphogenesis (band).

Morphogenesis (from the Greek morphê shape and genesis creation, literally, "beginning of the shape") is the biological process that causes an organism to develop its shape. It is one of three fundamental aspects of developmental biology along with the control of cell growth and cellular differentiation, unified in evolutionary developmental biology (evo-devo).

The process controls the organized spatial distribution of cells during the embryonic development of an organism. Morphogenesis can take place also in a mature organism, in cell culture or inside tumor cell masses. Morphogenesis also describes the development of unicellular life forms that do not have an embryonic stage in their life cycle, or describes the evolution of a body structure within a taxonomic group.

Morphogenetic responses may be induced in organisms by hormones, by environmental chemicals ranging from substances produced by other organisms to toxic chemicals or radionuclides released as pollutants, and other plants, or by mechanical stresses induced by spatial patterning of the cells.

Some of the earliest ideas and mathematical descriptions on how physical processes and constraints affect biological growth, and hence natural patterns such as the spirals of phyllotaxis, were written by D'Arcy Wentworth Thompson in his 1917 book On Growth and Form[1][2][a] and Alan Turing in his The Chemical Basis of Morphogenesis (1952).[3] Where Thompson explained animal body shapes as being created by varying rates of growth in different directions, for instance to create the spiral shell of a snail, Turing correctly predicted a mechanism of morphogenesis, the diffusion of two different chemical signals, one activating and one deactivating growth, to set up patterns of development, decades before the formation of such patterns was observed.[4] The fuller understanding of the mechanisms involved in actual organisms required the discovery of the structure of DNA in 1953, and the development of molecular biology and biochemistry.

Several types of molecules are important in morphogenesis. Morphogens are soluble molecules that can diffuse and carry signals that control cell differentiation via concentration gradients. Morphogens typically act through binding to specific protein receptors. An important class of molecules involved in morphogenesis are transcription factor proteins that determine the fate of cells by interacting with DNA. These can be coded for by master regulatory genes, and either activate or deactivate the transcription of other genes; in turn, these secondary gene products can regulate the expression of still other genes in a regulatory cascade. At the end of this cascade are classes of molecules that control cellular behaviors such as cell migration, or, more generally, their properties, such as cell adhesion or cell contractility. For example, during gastrulation, clumps of stem cells switch off their cell-to-cell adhesion, become migratory, and take up new positions within an embryo where they again activate specific cell adhesion proteins and form new tissues and organs. Developmental signaling pathways implicated in morphogenesis include Wnt, Hedgehog, and ephrins.[5] 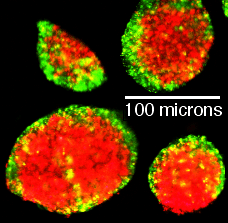 Example of cell sorting out with cultured P19 embryonal carcinoma cells. Live cells were stained with either DiI (red) or DiO (green). The red cells were genetically altered and express higher levels of E-cadherin than the green cells. After labeling, the two populations of cells were mixed and cultured together allowing the cells to form large multi-cellular mixed aggregates. Individual cells are less than 10 micrometres in diameter. The image was captured by scanning confocal microscopy.

Morphogenesis arises because of changes in the cellular structure or how cells interact in tissues. These changes can result in tissue elongation, thinning, folding or separation of one tissue into distinct layers. The latter case is often referred as cell sorting. Cell "sorting out" consists of cells moving so as to sort into clusters that maximize contact between cells of the same type. The ability of cells to do this has been proposed to arise from differential cell adhesion by Malcolm Steinberg through his Differential Adhesion Hypothesis. Tissue separation can also occur via more dramatic cellular differentiation events during which epithelial cells become mesenchymal (see Epithelial-mesenchymal transition). Mesenchymal cells typically leave the epithelial tissue as a consequence of changes in cell adhesive and contractile properties. Following epithelial-mesenchymal transition, cells can migrate away from an epithelium and then associate with other similar cells in a new location.[6]

The extracellular matrix (ECM) is involved in keeping tissues separated, providing structural support or providing a structure for cells to migrate on. Collagen, laminin, and fibronectin are major ECM molecules that are secreted and assembled into sheets, fibers, and gels. Multisubunit transmembrane receptors called integrins are used to bind to the ECM. Integrins bind extracellularly to fibronectin, laminin, or other ECM components, and intracellularly to microfilament-binding proteins α-actinin and talin to link the cytoskeleton with the outside. Integrins also serve as receptors to trigger signal transduction cascades when binding to the ECM. A well-studied example of morphogenesis that involves ECM is mammary gland ductal branching.[9][10]

Tissues can change their shape and separate into distinct layers via cell contractility. Just as in muscle cells, myosin can contract different parts of the cytoplasm to change its shape or structure. Myosin-driven contractility in embryonic tissue morphogenesis is seen during the separation of germ layers in the model organisms Caenorhabditis elegans, Drosophila and zebrafish. There are often periodic pulses of contraction in embryonic morphogenesis. A model called the cell state splitter involves alternating cell contraction and expansion, initiated by a bistable organelle at the apical end of each cell. The organelle consists of microtubules and microfilaments in mechanical opposition. It responds to local mechanical perturbations caused by morphogenetic movements. These then trigger traveling waves of contraction or expansion over presumptive tissues that determine cell type and is followed by cell differentiation. The cell state splitter was first proposed to explain neural plate morphogenesis during gastrulation of the axolotl[11] and the model was later generalized to all of morphogenesis.[12][13]