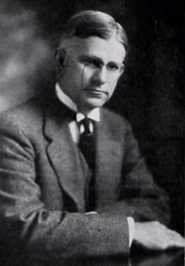 Denny from the 1919 War Corolla yearbook

George Hutcheson Denny (December 3, 1870 – April 2, 1955) was an American academic and former president at both Washington and Lee University and the University of Alabama. Both a football coach and an educator, he ultimately was appointed Washington and Lee's President in 1901, and he remained in that spot until his resignation in 1912 to become President at Alabama. Denny served as President of Alabama from 1912 through 1936 and again as Interim President in 1941 and 1942. Denny oversaw a major expansion of both enrollment and the physical campus during his tenure. He died at age 84 on April 2, 1955, at Lexington, Virginia.

Denny was born on December 3, 1870, in Hanover County, Virginia to George H. and Charlotte M. Denny.[1] He attended Hampden–Sydney College where he earned his Bachelor of Arts in 1891 and his Master of Arts in 1892.[1] In 1896 Denny was awarded his Doctor of Philosophy from the University of Virginia.[1] During his education at University of Virginia, he became a member of the Sigma Chi Fraternity.[2]

During his teaching tenure at Hampden–Sydney, Denny served as the head coach of their football team for the 1896 season. For the season, he led the Tigers to home victories over Randolph–Macon and Roanoke and a loss on the road against VPI en route to a record of two wins and one loss (2–1).[3]

Denny started his tenure at the University of Alabama in January 1912.[7] During his period in office as University President, Denny oversaw a significant increase in enrollment and construction on-campus.[7] Both Denny Chimes and Bryant–Denny Stadium were named in his honor.[8][9] He retired as President in 1936, but was later reappointed as interim president from 1941 to 1942.[10]

After he completed his term as Interim President, Denny retired to Lexington, Virginia in 1943.[7] Denny died on April 2, 1955, at a hospital in Lexington as a result of complications suffered after the amputation of his left leg.[7]