He was born near West Beaver (southeast of Gavers in Wayne Township[1]) in Columbiana County, Ohio. He attended the public schools of New Lisbon, Ohio. He taught school and studied law, but on account of ill health was compelled to abandon both. He later attended Columbus Medical College, moved to Cincinnati, and graduated from the Cincinnati College of Medicine and Surgery in 1877. He practiced for five years. He later went to New York City in 1882 and was graduated from the Bellevue Hospital Medical College in 1883. He then again resumed practice in East Liverpool, Ohio.

He resumed the practice of medicine in East Liverpool, Ohio, and died there. He is buried in Riverview Cemetery. 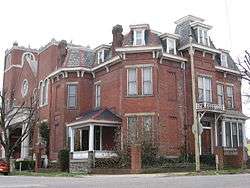 Ikirt's house in East Liverpool
This article is issued from Wikipedia - version of the 10/22/2016. The text is available under the Creative Commons Attribution/Share Alike but additional terms may apply for the media files.