Zachary T. "Zack" Space (born January 27, 1961) is an American politician and the former U.S. Representative for Ohio's 18th congressional district, serving from 2007 until 2011. He is a member of the Democratic Party. He currently serves as a principal for Vorys Advisors LLC a subsidiary of the law firm Vorys, Sater, Seymour and Pease.[1]

Space was born on January 27, 1961 in Dover, Ohio. His family is of Greek origin, originating from the island Icaria. His family had changed their surname from "Speis" to "Space". In 1986, Space started a law practice with his father. Their firm, Space & Space Company, LPA, has been in business for nearly 20 years and is focused on consumer rights law. He is a member of the Tuscarawas County and State of Ohio Bar Associations. In addition to his private law practice, he has worked as a public defender and served as Special Counsel to two Attorneys General of Ohio, Anthony J. Celebrezze, Jr. and Lee Fisher.

After the death of Dover Law Director Thomas Watson, Space was appointed to fill the vacancy. He won re-election in the 2001 general election with 70 percent of the vote. He was unopposed in the 2003 election. As law director, Space served as general counsel to the Dover city government and tried misdemeanor cases in the city's municipal court.

Space was a member of the Blue Dog Coalition.[2]

He is an advocate for embryonic stem cell research, a position he embraced after his son Nicholas was diagnosed with Type I diabetes at age six. Representative Space voted against the Senate version of the federal health care reform bill after voting for the House version. Rep. Space voted for the Waxman-Markey "cap and trade" bill allowing it to be brought out of committee and be passed by the House. AEP and EDF ran a commercial congratulating Rep. Space for his vote. 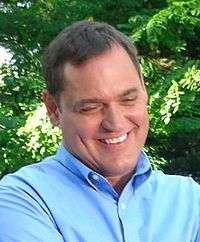 In July, a poll commissioned by the Space campaign showed Space ahead of Ney, 46 percent to 35 percent, with 19 percent undecided.[7]

On August 7, Ney withdrew from the race, citing concerns about legal issues facing him; he pleaded guilty to charges related to the Jack Abramoff Indian lobbying scandal on October 13. In a special primary the Ohio Republican party selected State Senator Joy Padgett to replace Ney. She was dogged by questions about a business bankruptcy that she and her husband had filed. She was also seriously hampered by associations with Ney, as well as widespread scandals surrounding the Ohio Republican Party.

On November 7, Space defeated Padgett 62 percent to 38 percent. Although much more attention was paid to Brad Ellsworth's 61 percent to 39 percent defeat of John Hostettler in Indiana's 8th district, Space's victory was the largest margin of any Democrat in a Republican-held seat nationwide in 2006. 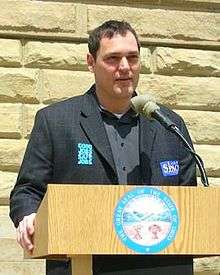 Space was challenged by Republican State Senator Bob Gibbs and Constitution Party Lindsey Sutton. Gibbs won the election, securing 54% of the vote to 40% that went to Space.

Space is a managing member of several closely held companies that have constructed and operated three hotels in Tuscarawas County. He has served as a board member of the Tuscarawas County Board of Mental Retardation and Developmental Disabilities and has been active as a coach in local youth baseball, softball, and football leagues. He is a member of St. George Greek Orthodox Church of Massillon, Ohio.