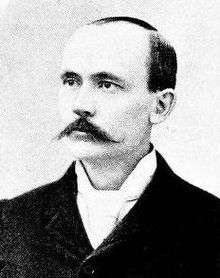 George Roland Malby (September 16, 1857 in Canton, St. Lawrence County, New York – July 5, 1912 in New York City) was an American politician from New York. He was Speaker of the New York State Assembly in 1894, and served three terms in Congress.

He attended Canton Union School and St. Lawrence University. He studied law, was admitted to the bar in 1881, and commenced the practice of law in Ogdensburg, New York.

Malby was the Justice of the Peace of Oswegatchie, New York.

Malby was elected as a Republican to the 60th, 61st and 62nd United States Congresses, holding office from March 4, 1907, until his death. On December 13, 1911, Malby was the sole dissenter when the House voted 300-1 to terminate relations with Russia based on that nation's discrimination against Jews.[1]

He was buried at Ogdensburg Cemetery in Ogdensburg, N.Y.