Horatio Seymour was born in Pompey Hill, Onondaga County, New York. His father was Henry Seymour, a merchant and politician; his mother, Mary Ledyard Forman (1785–1859), of Matawan, New Jersey, was the daughter of General Benjamin Forman and Mary Ledyard.[1] At the age of 10 he moved with the rest of his family to Utica, where he attended a number of local schools, including Geneva College (later Hobart College). In the autumn of 1824 he was sent to the American Literary, Scientific & Military Academy (Norwich University). Upon his return to Utica in 1827, Seymour read for the law in the offices of Greene Bronson and Samuel Beardsley. Though admitted to the bar in 1832, he did not enjoy work as an attorney and was primarily preoccupied with politics and managing his family's business interests.[2]:33 He married Mary Bleecker in 1835.[3]

Seymour's first role in politics came in 1833, when he was named military secretary to the state's newly elected Democratic governor, William L. Marcy. The six years in that position gave Seymour an invaluable education in the politics of the state, and established a firm friendship between the two men. In 1839 he returned to Utica to take over the management of his family's estate in the aftermath of his father's suicide two years earlier, investing in both real estate and in financial stocks. In 1841 he won election to the New York State Assembly, and he served simultaneously as mayor of Utica from 1842 to 1843. He won reelection in 1842, and again from 1844 to 1846, and thanks in part to massive turnover in the ranks of the Democratic caucus was elected speaker in 1845.[2]:33–86

When, in the late 1840s, the New York Democratic Party split between the two factions of Hunkers and Barnburners, Seymour was among those identified with the more conservative Hunker faction, led by Marcy and Senator Daniel S. Dickinson. After this split led to disaster in the elections of 1848, when the division between the Hunkers, who supported Lewis Cass, and the Barnburners, who supported their leader, former President Martin Van Buren, Seymour became identified with Marcy's faction within the Hunkers, the so-called "Softshell Hunkers," who hoped to reunite with the Barnburners so as to be able to bring back Democratic dominance within the state.

In 1850, Seymour was the gubernatorial candidate of the reunited Democratic Party, but he narrowly lost to the Whig candidate, Washington Hunt. Seymour and the Softs supported the candidacy of their leader, Marcy, for the presidency in 1852, but when he was defeated they enthusiastically campaigned for Franklin Pierce in 1852. That year proved a good one for the Softs, as Seymour, again supported by a unified Democratic Party, narrowly defeated Hunt in a gubernatorial rematch, while Pierce, overwhelmingly elected president, appointed Marcy as his Secretary of State.

Seymour's first term as governor of New York proved turbulent. He won approval of a measure to finance the enlargement of the Erie Canal via a $10.5 million loan in a special election in February 1854. But much of his tenure was plagued by factional chaos within the state Democratic Party. The Pierce administration's use of the patronage power alienated the Hards, who determined to run their own gubernatorial candidate against Seymour in 1854. Furthermore, the administration's support of the unpopular Kansas-Nebraska Act, with which Seymour was associated indirectly through his friendship with Marcy, cost him many votes. Whigs controlling the state legislature also sought to injure him further politically by responding to his call for action on the problem of alcohol abuse with a bill establishing a statewide prohibition, which Seymour vetoed as unconstitutional. Yet for all his troubles Seymour's prospects for reelection looked promising, as the divisions of the Democrats' opponents between the regular Whig candidate, Myron H. Clark, and the Know-Nothing Daniel Ullman appeared to be more dangerous to the Democrats' opponents than the candidacy of the Hard Greene C. Bronson looked to Democratic unity. In the end, however, the anti-Democratic tide was too strong, and in the four-way race Clark, who received only one-third of the vote, defeated Seymour by 309 votes.

Despite his defeat, as a former governor of the largest state of the Union, Seymour emerged as a prominent figure in party politics at the national level. In 1856 he was considered a possible compromise presidential candidate in the event of a deadlock between Franklin Pierce and James Buchanan until Seymour wrote a letter definitively ruling himself out from consideration. In 1860, some considered Seymour a compromise candidate for the Democratic nomination at the reconvening convention in Baltimore. Seymour wrote a letter to the editor of his local newspaper declaring unreservedly that he was not candidate for either spot on the ticket. Seymour supported the candidacy of Stephen A. Douglas for the presidency in both 1856 and 1860. In 1861, he accepted nomination as the Democratic candidate to the United States Senate, which was largely an empty honor as the Republican majorities in the state legislature rendered his defeat a foregone conclusion.[2]:171–173, 215–216, 231

In the secession crisis following Abraham Lincoln's election in 1860 Seymour strongly endorsed the proposed Crittenden Compromise. After the start of the American Civil War, Seymour took a cautious middle position within his party, supporting the war effort but criticizing Lincoln's conduct of the war. Seymour was especially critical of Lincoln's wartime centralization of power and restrictions on civil liberties, as well as his support for emancipation. 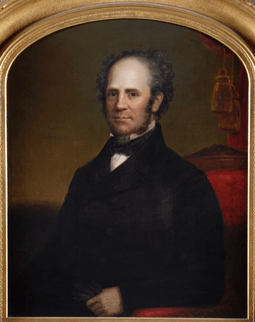 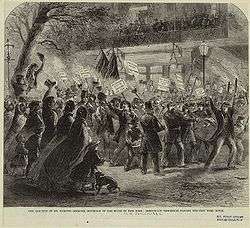 In 1862, the sitting governor, Republican Edwin D. Morgan, announced that he would not run for an additional term. Recognizing the symbolic importance of a victory in the Empire State, the Democratic Party nominated Seymour as the strongest candidate available. Though Seymour accepted the nomination with reluctance he threw himself into the election, campaigning across the state in the hope that a Democratic victory would restrain the actions of the Radical Republicans in Washington. He won a close race against the Republican candidate James S. Wadsworth, one of a series of victories by the Democratic ticket in the state that year.[2]:244–255

Seymour's second term proved to be even more tumultuous than his first one. As governor of the largest state in the union from 1863 to 1864, Seymour was one of the most prominent Democratic opponents of the President. He opposed the Lincoln administration's institution of the military draft in 1863 on constitutional grounds, an act which led many to question his support for the war. He also opposed a bill giving votes to the soldiers on legal grounds, vetoing the bill when it reached his desk. While not opposed to the goal he preferred to establish voting provisions through a constitutional amendment that was working its way simultaneously through the state legislature; nonetheless, his veto was portrayed by opponents as hostility to the soldiers. His decision to pay the state's foreign creditors using gold rather than greenbacks alienated "easy money" supporters, while his veto of a bill granting traction rights on Broadway in Manhattan earned him the opposition of Tammany Hall. Finally, his efforts to conciliate the rioters during the New York Draft Riots of July 1863 was used against him by the Republicans, who accused him of treason and support for the Confederacy.[2]:283–336

The growing accumulation of problems steadily eroded Seymour's position as governor. In what was regarded as a rebuke of his policies, Republicans swept the 1863 midterm elections, winning all of the major offices and taking control of the State Assembly. In the state elections the following year, Seymour himself was defeated for reelection in a close race by Republican Reuben Fenton.[2]:350–359, 381

Seymour continued as a prominent figure in national Democratic politics both during and immediately after his second term as governor. In 1864, he served as permanent chairman at the Democratic National Convention, where the opposition of many delegates to the nomination of General George B. McClellan led many to seek out Seymour as an alternative before the governor made it clear that he would not be a candidate. In the aftermath of the war Seymour joined other Democrats in supporting President Andrew Johnson's Reconstruction policies, and was a strong opponent of Radical Reconstruction, with its emphasis on guaranteeing civil and political rights for freed slaves.[2]:359–370, 383–391 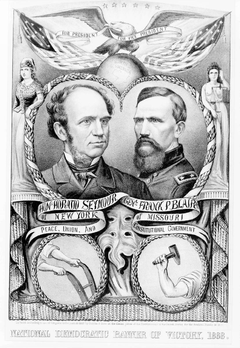 As the 1868 presidential election approached, there was no clear candidate for the Democratic nomination. Of the numerous candidates in contention, George H. Pendleton, who had run as the Democratic vice-presidential nominee in 1864, enjoyed considerable support but alienated the fiscal conservatives in the party with his plan to pay off federal debt using greenbacks. When Seymour was approached about running for the nomination, he demurred again, preferring that either Indiana Senator Thomas A. Hendricks or U.S. Chief Justice Salmon P. Chase receive the nomination instead.

At the convention, Seymour once again served as permanent chairman. Balloting began on June 7; on the fourth ballot, the chairman of the North Carolina delegation cast his state's votes for Seymour, whereupon the former governor again restated his refusal to accept the nomination. Two days later, as the twenty-second ballot was being taken, it appeared that Hendricks was in the process of winning the nomination until the leader of the Ohio delegation suddenly switched his delegation's votes to Seymour. Though Seymour reiterated his unwillingness to be the nominee, the delegations revised their votes and gave the nomination to him unanimously.[2]:411–431

With the nomination forced upon him, Seymour committed himself to the campaign. He faced considerable challenges; his opponent, General Ulysses S. Grant, enjoyed the support of a unified Republican party and most of the nation's press. While he generally adhered to the tradition that presidential nominees did not actively campaign, Seymour did undertake a tour of the Midwest and the mid-Atlantic states in mid-October. In his campaign Seymour advocated a policy of conservative, limited government, and he opposed the Reconstruction policies of the Republicans in Congress. Seymour's campaign was also marked by pronounced appeals to racism with repeated attempts to brand General Grant as the "Nigger" candidate and Seymour as the "White Man's" candidate. The Republican campaign, by contrast, was the first in which they "waved the bloody shirt", accusing Seymour and the Democrats of treason. Though Seymour ran fairly close to Grant in the popular vote, he was defeated decisively in the electoral vote by a count of 214 to 80.[2]:443–484 Subsequent to Seymour's loss, the Fifteenth Amendment to the federal Constitution was adopted which not only guaranteed the federal right to vote for recently emancipated slaves and others of African ancestry but also compelled New York State to reinstate voting rights for such citizens.

After the presidential election, Seymour remained involved in state politics, though primarily as an elder statesman rather than an active politician. He received a number of honors during this period, including the chancellorship of Union College in 1873. In 1874 he turned down almost certain election to the United States Senate, urging the nomination instead of the eventual choice, Francis Kernan. He refused two additional efforts to nominate him for the New York governorship, in 1876 and 1879, as well as a final attempt to select him as the Democratic presidential nominee in 1880.[2]:512, 521–526, 535–539, 571

Never enjoying robust health, Seymour suffered a permanent decline beginning in 1876. He made a final political effort in 1884 by campaigning for Grover Cleveland's election as president, but deteriorated physically the following year. In January 1886 his wife Mary suffered an illness. Seymour's own health worsened further. Seymour died in February 1886 and was interred in Forest Hill Cemetery in Utica, New York; Mary died a month later and is buried next to him.[2]:570–574 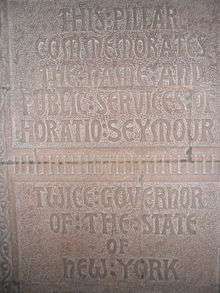 The Horatio Seymour memorial at the Cathedral of All Saints (Albany, New York).

In his book about the defeated presidential candidates, They Also Ran, Irving Stone mentioned how Seymour was one of America's greatest statesmen. Stone theorized that Seymour would have been "one of the most farsighted and creative of American presidents." He also believed that Seymour's gentle character made him the "most logical figure in the country to bind the wounds of the war and wipe out the bitterness...."

There is a memorial to Seymour at the Cathedral of All Saints (Albany, New York).