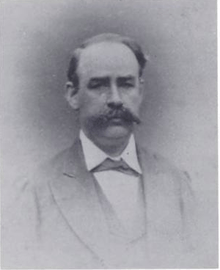 George Frederick Seward (November 8, 1840 – November 28, 1910) was a United States diplomat in China during the mid and late 19th century. He served as "Envoy Extraordinary and Minister Plenipotentiary" to China from 1876 until 1880. He later was an insurance executive with the Fidelity and Casualty Company.[1]

Seward was a native of Florida, New York,[1] and was educated at the S. S. Seward Institute. He attended Union College, and was appointed to the position of U.S. Consul in Shanghai in 1861. He was subsequently appointed U.S. Consul General in Shanghai on 1863, and U.S. Minister to China on January 7, 1876.[2]

His successor at Shanghai, John C. Myers of Reading, Pennsylvania, had reported to State Department superiors that Seward and his vice-counsul Oliver Bradford had been engaging in private land and capital speculation in China that seemed to violate the noninterference provisions of the Burlingame Treaty of 1868.[4] However, Myers had been suspended for his efforts, as had his successor Wiley Wells, ex-Congressman from Mississippi. Wells and Myers then sought redress from Congress, and a committee considered impeaching George Seward.

Meanwhile, the Hayes administration nominated John Singleton Mosby as consul at Hong Kong. Mosby's predecessor, Bailey, had been nominated as Seward's successor in Shanghai and had traveled to Washington to defend his cronies. Upon arriving at his post, Mosby heard many reports about a network of embezzlement and shady speculation masterminded by Seward, and which also included Bailey and Loring in Hong Kong, missionary Chester Holcombe, David Sickels and Torrey in Bangkok and Adolph Studer in Singapore. Mosby's initial report to his immediate supervisor, Frederick William Seward (George's cousin), mentioned only Bailey's improprieties, but received no reply and Bailey was confirmed. In March 1879, Mosby wrote to President Hayes' confidante, General Thomas C. H. Smith, about an embezzlement scheme operated by David B. Sickels (U.S. Consul at Bangkok) and his vice-counsel Torrey (a Hong Kong native whose correspondence with Loring whom Mosby had fired had accepted and read by Mosby). President Grant heard similar reports on his around-the-world cruise after his presidency ended, and encouraged Mosby to follow up, as well as spoke with President Hayes upon his return.

By October, 1879, Frederick Seward had resigned under fire, and before the 1880 elections (which Republican James Garfield won), Secretary of State William M. Evarts cleaned house in the far East. George Seward was replaced as Minister to China during the summer of 1880.