Burlingame was born in New Berlin, Chenango County, New York. In 1823 his parents (Joel Burlingame and Freelove Angell) took him to Ohio, and about ten years afterwards to Michigan. Between 1838 and 1841 he studied at the Detroit branch of the University of Michigan, and in 1846 graduated from Harvard Law School. On June 3, 1847 he married Jane Cornelia Livermore. They had sons Edward Livermore Burlingame (born 1848) and Walter Angell Burlingame (born 1852), as well as a daughter Gertrude Burlingame (born 1856).

Burlingame practiced law in Boston, Massachusetts, and won a wide reputation by his speeches for the Free Soil Party in 1848. He was a member of the Massachusetts constitutional convention in 1853, of the state senate from 1853 to 1854, and of the United States House of Representatives from 1855 to 1861, being elected for the first term as a Know Nothing and afterwards as a member of the new Republican Party, which he helped to organize in Massachusetts. He is a brother of the Delta Kappa Epsilon fraternity (Sigma chapter).

In May 1856, Senator Charles Sumner of Massachusetts delivered a vituperative denunciation of President Franklin Pierce and Southerners who sympathized with the pro-slavery violence in Bleeding Kansas. In particular, Sumner lambasted Senator Andrew Butler, a cousin of Congressman Preston Brooks of South Carolina. Three days later, Congressman Brooks advanced upon Sumner while he worked at his desk in the Senate chamber. Using his cane, Brooks beat Sumner into unconsciousness, with Sumner ripping his bolted-down desk from the floor as he attempted to escape. Brooks received no official censure from the House of Representatives, and was instead hailed as a hero in much of the pro-slavery South.[1]

Shortly afterwards, Burlingame delivered what The New York Times referred to as "the most celebrated speech"[2] of his career: a scathing denunciation of Brooks' assault on Sumner, branding him as "the vilest sort of coward" on the House floor. In response, Brooks challenged Burlingame to a duel, stating he would gladly face him "in any Yankee mudsill of his choosing". Burlingame, a well-known marksman, eagerly accepted, choosing rifles as the weapons and the Navy Yards on the Canadian side of the U.S. border in Niagara Falls as the location (in order to circumvent the U.S. ban on dueling). Brooks, reportedly dismayed by both Burlingame's unexpectedly enthusiastic acceptance and his reputation as a crack shot, neglected to show up, instead citing unspecified risks to his safety if he was to cross "hostile country" (the northern U.S. states) in order to reach Canada.[3] Burlingame's solid defense of a fellow Bostonian greatly raised his stature throughout the North.[4]

Minister to China and Chinese envoy to Washington 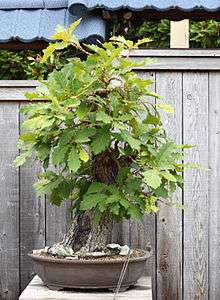 Burlingame was given this Daimyo Oak bonsai when he passed through Japan during his return to the U.S. It is on display at the Gardens of Lake Merritt, Oakland, California.[5]

On June 14, 1861 Lincoln instead appointed Burlingame as minister to the Qing Empire. Burlingame worked for a cooperative policy rather than the imperialistic policies of force which had been used during the First and Second Opium Wars and developed relations with the reform elements of the court. As he put it, the "cooperative policy... substituted for the old doctrine of violence one of fair diplomatic action," and the representatives of the Western powers agreed that they would not interfere in the internal affairs of China. Burlingame reported that he had used his diplomacy to get the European powers to agree that they would "give to the treaties a fair and Christian construction; that they ... never would menace the territorial integrity of China.” [7]

The success of this diplomacy was not lost on Qing dynasty court officials. On November 16, 1867, when he was set to retire and return to his political career at home, the Chinese government appointed Burlingame envoy extraordinary and minister plenipotentiary to head a Chinese diplomatic mission to the United States and the principal European nations. The mission, which included two Chinese ministers, an English and a French secretary, six students from Peking, and a considerable retinue, arrived in the United States in March 1868. Burlingame used his personal relations with the Republican administration to negotiate a relatively quick and favorable treaty. In a series of speeches across the country, he displayed eloquent oratory to advocate equal treatment of China and a welcoming stance toward Chinese immigrants.

On July 28, 1868 the mission concluded at Washington, D.C. a series of articles, supplementary to the Reed Treaty of 1858, and later known as the Burlingame Treaty. The treaty provided that Chinese subjects in the United States should enjoy the same rights as citizens of the most favored nation, a legal strategy which up until that point had only been used to expand foreign privileges in China. Burlingame worked successfully to include a clause permitting Chinese to become citizens, which was barred by American law. This treaty was the first equal treaty between China and a western power after the Opium War.[8]

Subsequently, Burlingame also negotiated treaties with Denmark, Sweden, Holland, and Prussia.[9] He died suddenly at Saint Petersburg on February 23, 1870, while negotiating terms for a treaty with Russia. He was buried in Boston.

After Burlingame's death, the spirit and many of the specific provisions of the treaty bearing his name were reversed. Foreign powers continued to encroach upon China, and Congress passed strict laws against Chinese immigration. The success of the Communist Revolution of 1949 led to animosity between the two countries and Burlingame's reputation was as a naive and euphoric advocate of China. After warming of relations in the 1980s, Burlingame's reputation began to rise again, however.[10]

Burlingame, California, and Burlingame, Kansas, are both named after Anson Burlingame. The Kansas Free-State party rewarded his anti-slavery efforts by renaming a small railroad town after him.[11] The ranch which Burlingame purchased in San Mateo on the San Francisco Bay retained his name and was eventually developed after his death.[12]