listen ) is the navy of Germany and part of the unified Bundeswehr ("Federal Defense"), the German Armed Forces. The German Navy was originally known as the Bundesmarine ("Federal Navy") from 1956 until 1995 when Deutsche Marine ("German Navy") became the official name with respect to the 1990 incorporation of the East German Volksmarine ("People's Navy"). It is deeply integrated into the NATO alliance. Its primary mission is protection of Germany's territorial waters and maritime infrastructure as well as sea lines of communication. Apart from this, the German Navy participates in peacekeeping operations, and renders humanitarian assistance and disaster relief.

Between May 1945 and 1956, the German Mine Sweeping Administration and its successor organizations, made up of former members of Nazi Germany's Kriegsmarine ("War Navy"), became something of a transition stage for the navy, allowing the future Marine to draw on experienced personnel upon its formation. In 1956, with West Germany's accession to NATO, the Bundesmarine ("Federal Navy"), as the navy was known colloquially, was formally established. In the same year the East German Volkspolizei See (literally "People's Police Sea") became the Volksmarine ("People's Navy"). During the Cold war the all of the German Navy's combat vessels were assigned to NATO's Allied Forces Baltic Approaches's naval command NAVBALTAP.

With the accession of East Germany to the Federal Republic of Germany in 1990 the Volksmarine along with the whole National People's Army (Nationale Volksarmee, NVA) became part of the Bundeswehr. Since 1995 the name German Navy is used in international context, while the official name since 1956 remains Marine without any additions. As of 31 December 2015, the strength of the navy is 16,045 men and women.[1]

A number of naval forces have operated in different periods. See

Presently the largest operation the German Navy is participating in is UNIFIL off the coast of Lebanon. The German contribution to this operation is two frigates, four fast attack craft, and two auxiliary vessels. The naval component of UNIFIL has been under German command.[2]

The navy is operating a number of development and testing installations as part of an inter-service and international network. Among these is the Centre of Excellence for Operations in Confined and Shallow Waters (COE CSW), an affiliated centre of Allied Command Transformation. The COE CSW was established in April 2007 and officially accredited by NATO on 26 May 2009.[3] It is co-located with the staff of the German Flotilla 1 in Kiel whose Commander is double-hatted as Director, COE CSW.

See also: List of active ships of the German Navy

In total, there are about 81 commissioned ships in the German Navy, including 6 submarines, 10 frigates and 21 auxiliary ships. The displacement of the navy is 220,000 tonnes. In addition, the German Navy and the Royal Danish Navy are in cooperation in the "Ark Project". This agreement made the Ark Project responsible for the strategic sealift of German armed forces where the full-time charter of three roll-on-roll-off cargo and troop ships are ready for deployments. In addition, these ships are also kept available for the use of the other European NATO countries.

A total of five Joint Support Ships, two JSS800 and three JSS400, were planned during the 1995-2010 period but the programme appears now to have been abandoned, not having been mentioned in two recent defence reviews. The larger ships would have been tasked for strategic troop transport and amphibious operations, and were to displace 27,000 to 30,000 tons for 800 soldiers.[6] The German Navy will use the Joint Support Ship HNLMS Karel Doorman (A833) of the Royal Netherlands Navy as part of the integration of the German Navy Marines (Seebatallion) in the Royal Netherlands Marine Corps as of 2016.

A German Navy boarding team member assigned to the frigate FGS Augsburg (F213) provides security with a P8 pistol for the remainder of his team as they board a local cargo hold by fast rope to conduct a search of the vessel.

The German Navy is commanded by the Inspector of the Navy (Inspekteur der Marine) supported by the Navy Command (Marinekommando) in Rostock. 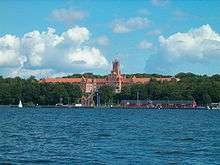