German language in the United States

German became the second most widely spoken language in the U.S. starting with mass emigration to Pennsylvania from the German Palatinate and adjacent areas starting in the 1680s, all through the 1700s and to the early 20th century. It was spoken by millions of immigrants from Germany, Switzerland, and the Austro-Hungarian and Russian Empires, and their descendants. Many newspapers, churches and schools operated in German as did many businesses. The use of the language was strongly suppressed by social and legal means during World War I, and German declined as a result, limiting the widespread use of the language mainly to Amish and Old Order Mennonite communities. After the First World War, German lost its position as the second most widely spoken language in the United States.[9][10]

Around 1800, two German-language Methodist churches were founded, the "Vereinigten Brüder in Christo" and the "Evangelische Gemeinschaft". Both used Methodist hymnals in German and published German newspapers, of which one existed until 1937. From the middle of the 19th century English was used as a second language in the churches, but there were regions in which German was the main church language into the 20th century. In 1937 both churches fused and joined the United Methodist Church in 1968. 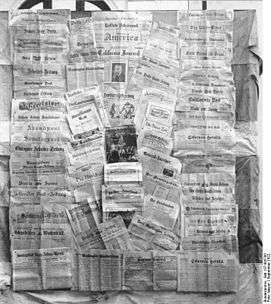 The first German newspaper in the U.S. was der Hochdeutsch-Pennsylvanische Geschicht-Schreiber, oder Sammlung Wichtiger Nachrichten aus dem Natur- und Kirchen-Reich ("the High German-Pennsylvanian story-writer, or collection of important news from the realms of nature and the church"), later known as die Germantauner Zeitung.[11] It was a German-language paper, Der Pennsylvanische Staatsbote that on July 5, 1776, was the first paper to report the American Declaration of Independence, and it did so in German translation. English readers would have to wait a day later to read the English text in the Pennsylvania Evening Post.

In the 19th century the German press increased in importance and the number of dailies exploded. In 1909 a report stated "every American city or town with a large German population possesses one or more German newspapers. In New York City there are twelve or more… the best… being…the New Yorker Staats-Zeitung. The Illinois Staats-Zeitung has nearly as large a circulation, and the Milwaukee Germania claims the largest circulation of all. The Milwaukee Herold comes not far behind. Philadelphia has its Demokrat, Baltimore its Correspondent, Cincinnati its Volksblatt, St. Louis…its…Die Westliche Post and Der Anzeiger des Westens." It also reported that compared to 17,194 English papers in the U.S. in 1900, there were 613 German ones. The next largest language group, the Scandinavian, had only 115.[11]

With repression of the German language during World War I, the German press in America was reduced drastically. 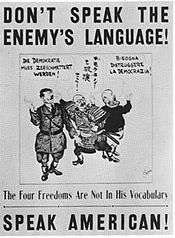 A poster of WWII era discouraging the use of Italian, German, and Japanese.

Persecution during World War I

When the U.S. joined in World War I, an anti-German hysteria quickly spread in American society. German-Americans, especially immigrants, were blamed for military acts of the German Empire, and even speaking German was seen as unpatriotic. Many German-American families anglicized their names (e.g. from Schmidt to Smith, Schneider to Taylor, Müller to Miller), and German nearly disappeared in public. Many states forbade the use of German in public and the teaching of German in schools.

An extensive campaign forbade all things German, such as performing the music of German composers at symphony concerts. Language was the focus of legislation at state and local levels. It took many forms, from requiring associations to have charters written in English to banning speaking German within city limits. Some states banned the teaching of all foreign languages, though most only banned German. A bill was introduced in October 1918 to create a national Department of Education, intended to restrict federal funds to states that enforced English-only education. The Lutheran Church was divided by an internal battle over conducting services and religious instruction in German.[12]

On April 9, 1919, Nebraska enacted a statute called "An act relating to the teaching of foreign languages in the state of Nebraska," commonly known as the Siman Act. It provided that "No person, individually or as a teacher, shall, in any private, denominational, parochial or public school, teach any subject to any person in any language other than the English language." It forbade foreign instruction to children who had not completed the eighth grade. A total ban on teaching German in both public and private schools was imposed for a time in at least fourteen states, including California, Indiana,[13] Wisconsin,[14] Ohio, Iowa and Nebraska. California's ban lasted into the mid-1920s. German was banned again in California churches in 1941. The Supreme Court case in Meyer v. Nebraska ruled that these laws were unconstitutional, but German never recovered its position as the second language in the United States. Pennsylvania's legislature passed a German-language ban, but it was vetoed by the governor.

Much of the animosity against German had to do with the Socialist, pacifist and isolationist tendencies of many German-Americans.

There is also a significant population of Amish and Old Order Mennonites located in rural areas of Elkhart County and LaGrange County, Indiana, who speak Pennsylvania Dutch. A much smaller community of Pennsylvania Dutch-speaking Amish is found in Parke County, in western Indiana. Many English words have become mixed with this dialect and it is quite different from Standard German (Hochdeutsch), but quite similar to the dialect of the Palatinate region.

Usually, Pennsylvania Dutch (often just "Dutch" or "Deitsch") is spoken at home, but English is used when interacting with the general population. The Amish and Old Order Mennonites of northern Indiana often differentiate between themselves and the general population by referring to them, respectively, as the "Amish" and the "English", noting the difference in language. Pennsylvania "Dutch" is sometimes used in worship services, though this is more common among the Amish than the Mennonites. More mainstream (city) Mennonites may have a working knowledge of the language, but it is not frequently used in conversation or in worship services. 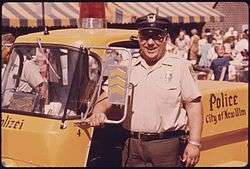 Parking meter checker stands by his police vehicle which is imprinted with the German word for police (Polizei). It is part of the town's highlighting its German ethnic origins. New Ulm, Minnesota, July 1974.

Bernese German, (Standard German: Berndeutsch, Alemannic German: Bärndütsch) is a subdialect of High Alemannic German which is spoken by Old Order Amish in Adams County, Indiana and their daughter settlements. There are several thousand speakers of the dialect in the USA.

A dialect called Texas German based in the Texas Hill Country around the town of Fredericksburg still exists, but has been dying out since the end of World War II. Following the introduction of English-only schooling during both world wars, Texas German speakers drifted towards English and few passed the language to their descendants.[19]

Hutterite communities in the United States and Canada speak Hutterite German, an Austro-Bavarian dialect. Hutterite is spoken in the U.S. states of Washington, Montana, North and South Dakota, and Minnesota; and in the Canadian provinces of Alberta, Saskatchewan, and Manitoba.

Plautdietsch, a Low German dialect, is spoken by "Russian" Mennonites, who immigrated mostly to Kansas in the mid 1870. These Mennonites tended to slowly assimilate into the mainstream society over several Generations, but "Russian" Mennonite immigrants mainly from Mexico, where there is no assimilation, invigorated Plautdietsch in Kansas.

German as the official US language myth

An urban legend, sometimes called the Muhlenberg legend after Frederick Muhlenberg, states that English only narrowly defeated German as the U.S. official language. In reality, the proposal involved a requirement that government documents be translated into German.[20][21] The United States has no statutory official language; English has been used on a de facto basis, owing to its status as the country's predominant language.

In Pennsylvania, which had a large German-American population, German was long allowed as the language of instruction in schools,[22] and state documents were available in German until 1950. As a result of anti-German sentiment during World War I, the fluency decreased from one generation to the next and only a small fraction of Pennsylvanians of German descent are fluent in the German language.

The ties between Germany and the United States having been historically strong has brought about a number of important literary authors.[23] In modern German literature, this topic has been addressed frequently by the Boston-born author of German and English lyrical poetry, Paul-Henri Campbell.

German is third in popularity after Spanish and French in terms of the number of colleges and universities offering instruction in the language.[25]

See also: List of multilingual Presidents of the United States