The three most prevalent West Germanic languages are English, German, and Dutch. The family also includes other High and Low German languages and dialects including Luxembourgish and Yiddish, in addition to other Franconian and Ingvaeonic languages such as the Frisian languages, Scots and Afrikaans (which are closely related to but separate from English and Dutch, respectively). Additionally, several creoles, patois, and pidgins are based on Dutch and English as they were languages of colonial empires. 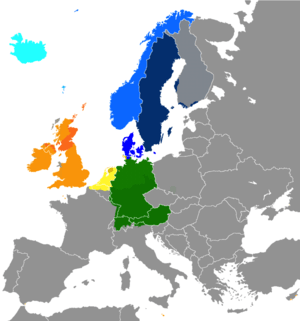 The West Germanic languages share many lexemes not existing in North Germanic and/or East Germanic—archaisms as well as common neologisms.

Existence of a West Germanic proto-language

Although there is quite a bit of knowledge about North Sea Germanic or Anglo-Frisian (due to characteristic features of its daughter languages, Anglo-Saxon/Old English and Old Frisian), linguists know almost nothing about "Weser-Rhine Germanic" and "Elbe Germanic". In fact, these two terms were coined in the 1940s to refer to groups of archeological findings rather than linguistic features. Only later were these terms applied to hypothetical dialectal differences within both regions. Even today, the very small number of Migration Period runic inscriptions from this area—many of them illegible, unclear or consisting only of one word, often a name—is insufficient to identify linguistic features specific to the two supposed dialect groups. 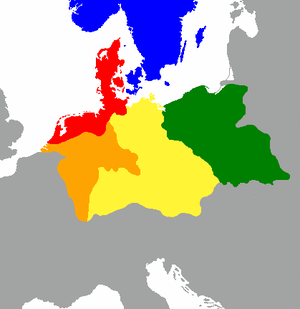 Under this view, the properties that the West Germanic languages have in common separate from the North Germanic languages are not necessarily inherited from a "Proto-West-Germanic" language, but may have spread by language contact among the Germanic languages spoken in central Europe, not reaching those spoken in Scandinavia or reaching them much later. Rhotacism, for example, was largely complete in West Germanic at a time when North Germanic runic inscriptions still clearly distinguished the two phonemes. There is also evidence that the lowering of ē to ā occurred first in West Germanic and spread to North Germanic later, since word-final ē was lowered before it was shortened in West Germanic, whereas in North Germanic the shortening occurred first, resulting in e that later merged with i. However, there are also a number of common archaisms in West Germanic shared by neither Old Norse nor Gothic. Some authors who support the concept of a West Germanic proto-language claim that not only shared innovations can require the existence of a linguistic clade but that there can be also archaisms that cannot be explained simply as retentions later lost in the North and/or East because this assumption can produce contradictions with attested features of these other branches.

The debate on the existence of a Proto-West-Germanic clade was recently summarized:

That North Germanic is .. a unitary subgroup [of Proto-Germanic] is completely obvious, as all of its dialects shared a long series of innovations, some of them very striking. That the same is true of West Germanic has been denied, but I will argue in vol. ii that all the West Germanic languages share several highly unusual innovations that virtually force us to posit a West Germanic clade. On the other hand, the internal subgrouping of both North Germanic and West Germanic is very messy, and it seems clear that each of those subfamilies diversified into a network of dialects that remained in contact for a considerable period of time (in some cases right up to the present).[6]

If indeed Proto-West-Germanic actually existed, it must have been between the 3rd and 7th centuries. Until the 3rd century AD, the language of runic inscriptions found in Scandinavia and in Northern Germany were so similar that Proto-North-Germanic and the Western dialects in the south were still a part of one language ("Proto-Northwest-Germanic"). On the other hand, the High German consonant shift that occurred during the 7th century AD in what is now southern Germany and Switzerland ended the linguistic unity among the West Germanic dialects of that time.

During the Early Middle Ages, the West Germanic languages were separated by the insular development of Old and Middle English on one hand, and by the High German consonant shift on the continent on the other.

The High German consonant shift distinguished the High German languages from the other West Germanic languages. By early modern times, the span had extended into considerable differences, ranging from Highest Alemannic in the South (the Walliser dialect being the southernmost surviving German dialect) to Northern Low Saxon in the North. Although both extremes are considered German, they are not mutually intelligible. The southernmost varieties have completed the second sound shift, whereas the northern dialects remained unaffected by the consonant shift.

Of modern German varieties, Low German is the one that most resembles modern English. The district of Angeln (or Anglia), from which the name English derives, is in the extreme northern part of Germany between the Danish border and the Baltic coast. The area of the Saxons (parts of today's Schleswig-Holstein and Lower Saxony) lay south of Anglia. The Anglo-Saxons, two Germanic tribes, were a combination of a number of peoples from northern Germany and the Jutland Peninsula. 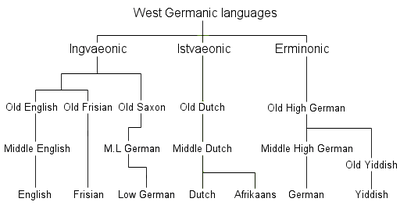 Note that divisions between subfamilies of Germanic are rarely precisely defined; most form dialect continua, with adjacent dialects being mutually intelligible and more separated ones not.

Also note that English is part of the North Sea Germanic branch of the West Germanic languages.

Comparison of phonological and morphological features

The following table shows a list of various linguistic features, and their extent among the West Germanic languages. Some may only appear in the older languages but are no longer apparent in the modern languages.

The original vowel system of West Germanic was similar to that of Proto-Germanic; note however the lowering of the two long front vowels.

The consonant system was also essentially the same as that of Proto-Germanic. Note, however, the particular changes described above, as well as West Germanic gemination.